Describing himself as a “very, very late bloomer in the singing world,” Otago music graduate Joel Amosa says winning the Lexus Song Quest in July has taken weeks to sink in.

Joel, who is now 28, only started formal singing aged 16 during his final years at Auckland’s Dilworth School.

One of five finalists, he performed three songs to take the Lexus title. He was accompanied by acclaimed pianist and Otago staff member Professor Terence Dennis while performing Copland’s At the River and the New Zealand Symphony Orchestra while performing two arias. 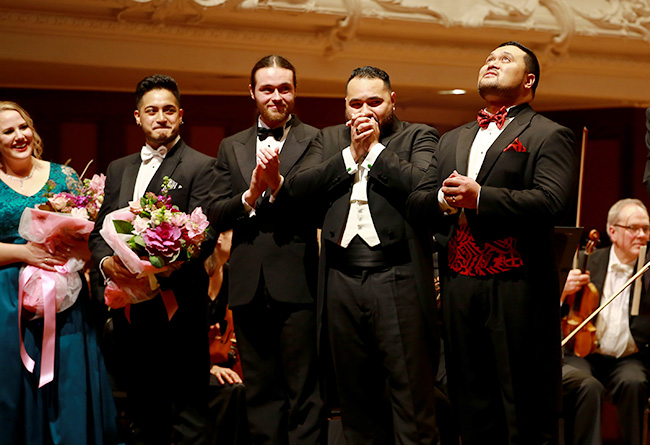 “I was honestly shocked, overwhelmed, joyous and thankful,” he says about the moment he was announced the winner.

“I probably looked like an antelope caught in the headlights.”

While he had made the finals of other competitions, this was the first he had won.

“It validated a lot of singing questions for me,” says Joel from his home in Auckland.

“It’s taken me to win Lexus to feel I can do this as a career. I am my own worst critic and the win has boosted my confidence to put my name forward for auditions and overseas competitions.”

As a child, he was surrounded by music, singing hymns at home, in choirs at church and in barbershop quartets. His grandfather played the church organ and his Uncle Tai played the piano.

It was his teachers at Dilworth who suggested he switch from piano to singing for his final NCEA studies, and then encouraged him to give singing a go at university.

“I had no idea about universities, I would probably have gone on to get a job somewhere,” he says.

“Mrs Caldwell at Dilworth advised that there was a teacher at Otago, Isabel Cunningham, who would work well with my voice.”

Dilworth booked the flights and accommodation for the audition at Otago, and Joel sang in front of Professor Dennis, Isabel Cunningham and Associate Professor Judy Bellingham. He was accepted and started at Otago in 2008, aged 17.

Joel went on graduate with a BMus in 2011 and then completed a Postgraduate Diploma in Music, (Performance Voice) in 2013.

“I spent six years at Otago and every one was a huge highlight for me.”

He was a resident at Knox College for his first two years, and was president of Knox’s student association in his second year.

“Knox had some special opportunities for music, there was a large cultural side, with the Knox Choral Scholars, and the chance to perform items at dinner on Sunday nights.”

He says standing up to sing in front of his peers gave him the opportunity to develop both his singing and his confidence. He was also an Otago Sextet member for three years. 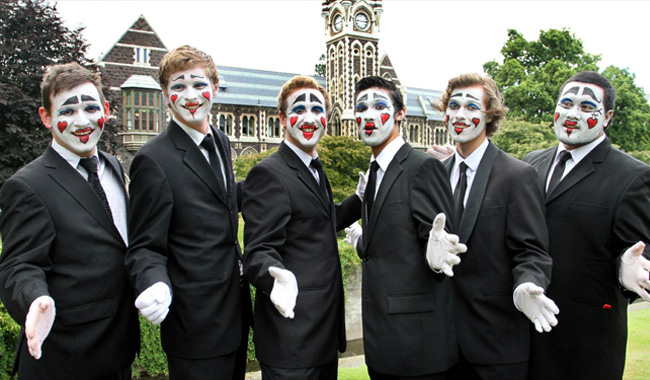 “I will cherish those days forever, just performing satire with clown faces on, it’s a part of the University’s history.

As far as the Music Department goes, Joel says there is an “endless list” of people who helped and influenced his career.

“Isabel Cunningham first and foremost, Judy Bellingham, and Professor Dennis in my later years had a huge impact, not just on my singing, but also on my interpersonal skills. The music department was like a family away from home, it was very comforting in that way.”

He says both classical and contemporary students felt very connected across the department, even though they only socialised at the infamous Music Ball together once during the year.

It was also there that he met soprano Maia Vegar, in 2010. They sang together in Opera Otago’s production of the Marriage of Figaro in 2012.

“She was the Countess and I was the cheating Count.”

Maia graduated in 2013 and the pair married last November.

His mother Joyce Amosa-Leavasa and father Tevaga Leavasa are Samoan, and he goes back to Samoa every year or two to reconnect with family.

Since returning to Auckland in 2014, Joel continued lessons with teacher Frances Wilson. For the past two and a half years, Joel has been teaching himself – using every singing performance, concert and opportunity as a way of “keeping up with the rest of NZ”. In 2015 he joined the ASB, and his managers have allowed him to combine his singing career and his job as Regional Manager for central Auckland branch banking.

“If a singing opportunity comes up in Christchurch I can complete my work off-site, they’ve been very supportive.“

As a way of giving back to the bank, he has formed the ASB Voices Choir and the ASB Pasifika Choir, which he leads. Joel is also an honorary member of the ASB Kapa Haka and they regularly get out to the regions to perform.

“You never know who will come out of the woodwork in the branches around the country.”

His singing career so far has included performing in the Napier Festival, for Opera Otago, at the Auckland Town Hall and the Isaac Theatre in Christchurch.

In coming months he will perform Handel’s Messiah several times, including once in Korean, and with fellow Otago alumnus Simon O’Neill in December.

He has dates set for Rotorua, Christchurch, and with the Auckland Philharmonic Orchestra next year.

“Just standing and singing the sacred songs, I connect to the spiritual aspect.”

Winning the Lexus has brought him and Maia to a crossroads.

“It has opened doors overseas, and there is a chance to take advantage of those scholarships and opportunities.”

He now feels he has the maturity, both as a singer and as a person, to make good choices about the chances and challenges he has been presented with.

“And I have a wise council around me, in my friends, my family and colleagues and singing staff aplenty.”

Being among the names of the winners of the Lexus Song Quest is “truly inspiring.”

“And I hope my being there can inspire others too,” he says.