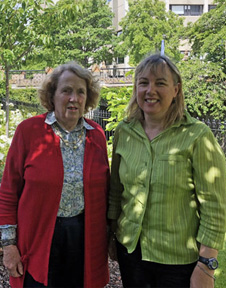 We love it when visiting alumni call in to the office on campus with armfuls of photos and stories to tell.

In December, Home Science alumna Margaret Wallace was in Dunedin for the presentation of an Honorary Doctorate to former New Zealand Surveyor General William (Bill) Robertson ONZM, and took the time to come along and talk to us about her work as an international student adviser in the 1960s and 70s.

Margaret graduated in 1961 with a Bachelor of Home Science degree. She spent her first two years at Otago living at St Helen’s (formerly a maternity hospital) and then moved to a flat on Dalmore Street. Her mother had been an early graduate of Dentistry – she thinks the eighth female graduate from Otago – and she herself had initially wanted to study accounting.

“But a male said to me it was not a career for females. I’d heard about Home Science so I came to study the four-year degree.” 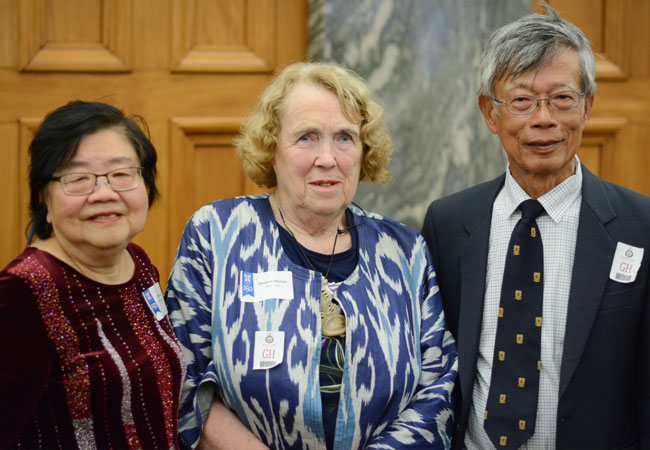 Margaret at the 150th Otago alumni function in Wellington last year, with Loo Sai Harn (left) and Donald Koh, both Colombo Plan students at Otago whom Margaret first met in 1968.

Growing up in Heretaunga, Upper Hutt, her parents had often entertained overseas students whom her mother had met when the Federation of University Women (now Federation of Graduate Women) invited overseas students studying in Wellington to meetings. At that time food served in hostels and guest houses was an issue, with many students complaining about the meals served as there was little variety and many hated the smell of roast mutton.

“My mother said to the students ‘I don’t know how to cook Asian food but you are welcome to use my kitchen’. They’d bring quite a few other students out to Heretaunga on the train with them.”

Through those connections after she finished her degree she was asked if she would like to work in Sarawak, Malaysia. Soon after, she received a letter from the Principal of St Mary’s School in Kuching, Sarawak, asking if she would come to teach mathematics.

“At the time many of my cohort were going to the UK, and I was undecided where my future lay so I said yes as it was a different environment and there were a number of different cultures. After landing in Sarawak I stayed for four years.”

It was the time of the Indonesia-Malaysia confrontation period, stemming from Indonesia’s opposition to the creation of Malaysia.

“So it was quite scary,” says Margaret. “There was only one road, of about 160 kilometres, in the State. It was quite close to the border with Indonesia Kalimantan in places so we were advised not to use it. I therefore had to travel by speed boat and long boat if I wanted to visit other parts of the State during holidays.”

She was in the country from 1962 to 1966 and it was at this time she got to know Bill Robertson, who, with two other New Zealand surveyors, established a Surveying School in the State under the aegis of the Colombo Plan.

The Colombo Plan was established in 1950 as a cooperative venture for the economic and social advancement of the peoples of South and Southeast Asia. It grew from a group of seven Commonwealth countries to an inter-governmental organisation of 27 members. Today it promotes interest in and support for the economic and social development of Asia, including sharing and transfer of technology and developmental experiences, with a focus on public policy formulation, private sector development and drug abuse and prevention.

In the early years, assistance from developed to developing countries comprised both the transfer of physical capital and technology, as well as a strong component of skills development – so while infrastructure was constructed in member countries, a large number of people were simultaneously trained to manage such infrastructure and growing economies.

Approximately 3,500 students came to New Zealand as part of the Plan during the 1950s, 60s and 70s, after which New Zealand withdrew from the programme. 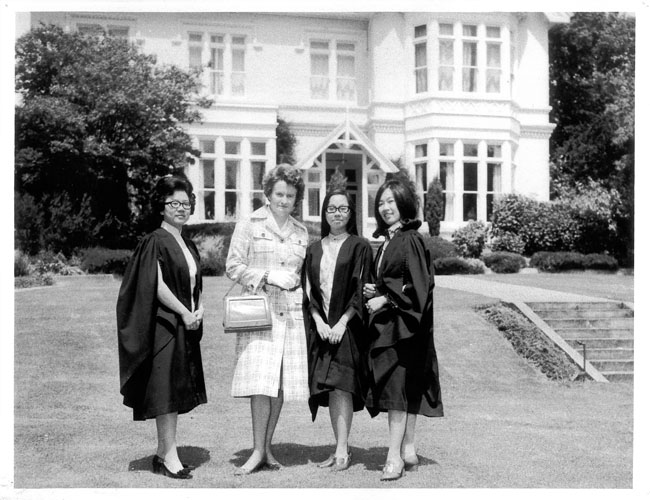 As recounted by Alison Clarke in Otago, 150 Years of New Zealand’s First University and her related blog, Otago’s first Colombo Plan students arrived in the early 1950s, and in 1965 there were just over 160 international students on campus, more than half from Asian countries and probably most of those were on the Colombo Plan scheme. The largest group came from countries which would later form Malaysia: Malaya, Sabah and Sarawak. They completed a wide range of courses across all faculties except the Medical Faculty.

When a Colombo Plan mission, including officials from the External Aid Division (EAD) of the New Zealand Department of External Affairs (now the Ministry of Foreign Affairs), visited Sarawak it was suggested that Margaret join the EAD as an international student adviser. As Malaysians had been trained overseas to fulfil positions held by expatriates, Margaret accepted the offer to work in Wellington.

She spent five years with the EAD advising international students from schemes including the Colombo Plan, SCAAP (Special Commonwealth Assistance to Africa Plan) and MARA (Majilis Amanah Rakyat) which was under the sponsorship of the Malaysian Government. Students holding scholarships from any of the three organisations received the same terms and conditions. 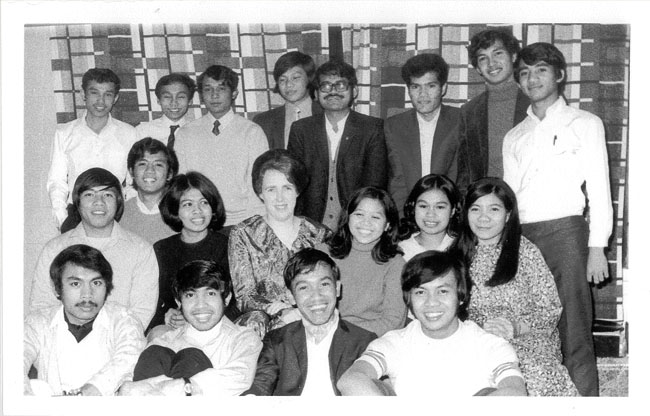 Her work included ensuring the students received assistance to complete the courses and training which their governments required, or negotiating with the respective governments and training institutions to make adjustments; discussing their progress with professors and lecturers; ensuring they were living in suitable accommodation; and receiving their weekly stipend and specified amounts for expenses.

She said one of the big difficulties facing students at that time was communicating with family back home, as some family members were unable to write in their first language and often the script was quite different from that of the English language, although sometimes they could communicate through younger relatives.

“Under the terms of the three schemes, only after three years would they get a trip back home. International toll calls were a rarity in those days. Today they can be in touch on a cell phone any time of the day.”

It was also difficult for many to speak, study and write in English, and at the same time they had to adapt to a different culture and cuisine.

“I really congratulate the students who accepted the challenges of living and studying in the foreign environment of New Zealand, which in the 1950s and 1960s was a fairly monocultural society. On top of that, the majority came from tropical countries and those at Otago survived the cold winters experienced in Dunedin.”

Newly-arrived students appreciated that Margaret had lived in Malaysia for some years. In her autobiography Te Anau teacher and former international student from the Maldives Latheefa Verrall says Margaret understood the Asian background more than most New Zealanders they met in the early years.

"Margaret was and still is someone in the business of developing people. She is superb at enabling people to get things done and connecting them to others," she says.

Service organisations such as Rotary and Lions offered holidays in members' homes during the holidays, which meant students were able to visit other parts of New Zealand and become familiar with different cultures and ways of life including farming.

“Some lifelong friendships were made with their host's families. In some cases the students considered their hosts to be their foster New Zealand families. I know one Asian cabinet minister who still calls his New Zealand hosts ‘mum and dad’ after 50 years of friendship,” says Margaret.

“It was very gratifying to watch the students develop in a foreign environment and complete the courses and training for which their governments had sent them to New Zealand.” 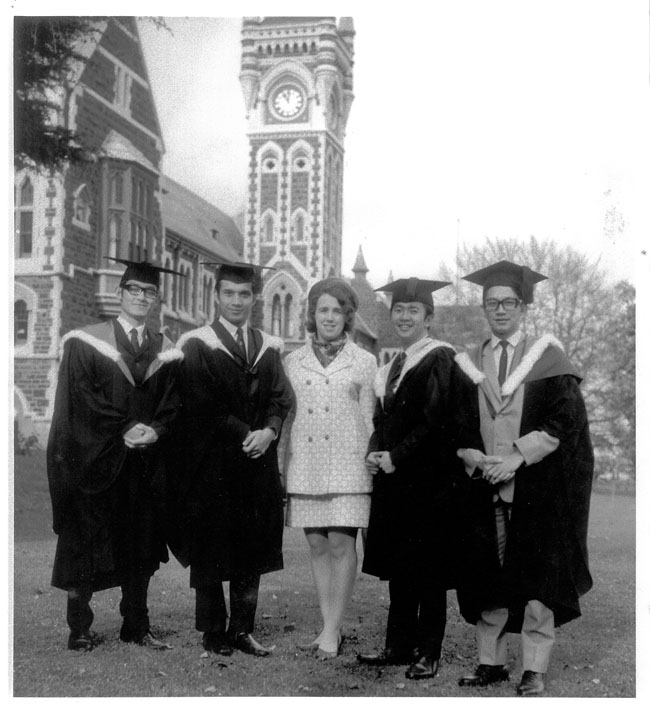 She says New Zealanders who met the overseas students also gained much from learning about other cultures and some later visited the returned graduates in their home countries. New Zealand businesses also benefited as the students often sought out New Zealand products after they returned home.

Many of the returnees became very influential in their home countries, such as Ebraima Manneh from the Gambia who was the first overseas student to be elected as President of the Otago University Students Association and is now serving his country in their diplomatic service; and Mohammed Nor Yusof who has recently retired as Chairman of Malaysian Airlines. Mazlan Othman from Malaysia became the first woman to complete a PhD in Physics at Otago and went on to become Director of the UN Office for Outer Space Affairs. Graduates have also been employed as professors and vice-chancellors in their home countries, as heads of government departments and have taken roles in the diplomatic services, as well as being elected as members of various parliaments.

In 1971 Margaret moved away from working with international students and into a whole new chapter in her career, moving to the State Services Commission where she worked as Education Officer and later Executive Assistant to the Commissioners. She was also Private Secretary to the Minister of State Services where she was one of the staff to move into the newly-completed Beehive.

“Finally, Victoria University offered a postgraduate course in accounting, so to get it out of my system I applied to enrol for the course and was accepted. I completed the course and became a Chartered Accountant, and was employed as an international tax investigator.”

She has kept in touch with many of the students, and returns to Malaysia every couple of years, as well as visiting friends around New Zealand whom she made during her international student days. Margaret also looks forward to receiving the former students, their children and grandchildren when they visit New Zealand and has been very impressed by the number of students, whose parents or grandparents may have been illiterate, who have graduated from prestigious universities such as Harvard, Oxford or Cambridge.