Radiation Therapy scholarship a chance to make a positive impact

Having spent the past year trying not to focus too much on her grades, Nadia Kahan was taken by surprise when she heard she’d been awarded the Angela Allen Travelling Scholarship for top Bachelor of Radiation Therapy graduate. 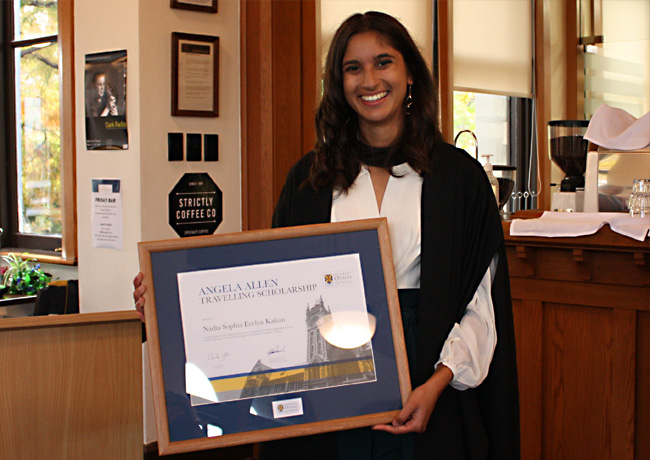 “It was very humbling,” says Nadia, who received her scholarship certificate at a special morning tea for Radiation Therapy graduates on 8 May, shortly before their graduation ceremony at the Dunedin Town Hall. “I was mostly quite surprised as I’d been spending the last year of uni trying not to focus on grades, so I didn’t actually look at them.”

Due to disruptions caused by the COVID-19 pandemic, the class didn’t get the chance to get together for a final celebration, and Nadia says it’s been great to see everyone again. “There’s a lot of camaraderie in radiation therapy classes,” she says.

“I loved the small class, there were 25 of us towards the end, and it’s been so long since we’ve seen each other. I’m also very grateful to our lecturers for their effort and support in teaching us, and it was lovely to see them at graduation too.”

The $5,000 scholarship was established in 2003 by Charles Allen and is named in honour of his late wife Angela, a radiographer, who suffered from polycystic kidney disease which led to kidney failure. Angela was born in Invercargill and studied radiography at the University of Otago. The Allen family have maintained an interest with the department and each recipient has received a signed certificate, personal letter and copy of Angela’s eulogy from Charles Allen, who lives in Melbourne.

Presenting the certificate to Nadia, the Director of the Development and Alumni Relations Office Shelagh Murray says the scholarship was established to commemorate and continue Angela’s passion for radiography and in particular radiation therapy.

While the pandemic means some of Nadia’s plans for the scholarship have had to be deferred, she still plans to attend the online Australian Society of Medical Imaging and Radiation Therapy ASMIRT/New Zealand Institute of Medica Radiation Technology NZIMRT conference in Melbourne in June. In the future she hopes she’ll be able to attend an overseas conference such as the International Conference on Medical Imaging and Radiation Therapy in December 2022.

“I’m loving working in Auckland. There are lots of opportunities because it’s such a large department, and I really value working with a diverse patient group.”

Working on radiation treatments, she sees people every day over a number of days and weeks and really gets to know them, “which is something quite special”.

She is especially passionate about ensuring a holistic approach is applied to help meet the needs of patients from a diverse group of cultures. “It can make such a difference if people are getting all the support they need, from social workers, to psychologists, to Kaumātua involvement, and there are many beneficial organisations and charities out there,” she says.

“I’m interested in bringing it all together. We need to make sure we’re doing the best for each individual person and identifying what they need.”

The scholarship is awarded to a student at the University in the graduating class who has gained the highest aggregate of marks in the three years of study. The award is to enable the outstanding student to pursue graduate studies and/or experience of radiation therapy outside New Zealand.