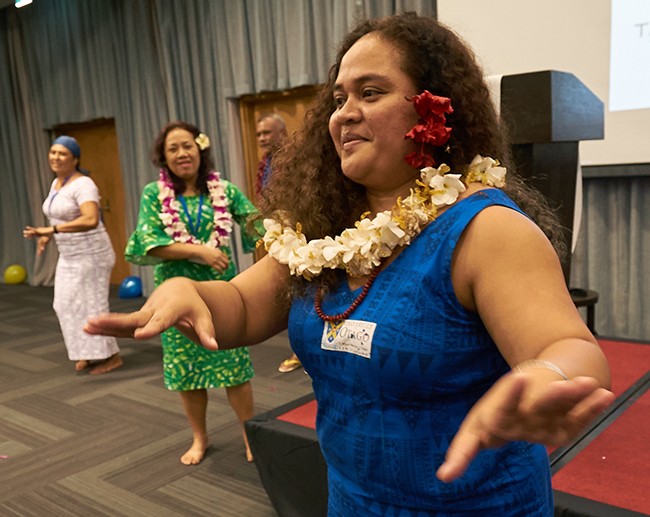 Fanaafi, who studied History (BA(Hons) 2001) and later gained a Law PhD (2009) at Otago, says being elected as chapter president at a gala event in Apia on 5 April was an “honour and privilege”, which will lead to many opportunities to give back to Otago.

The La O Samoa Executive Committee held its first meeting less than a week after its formation.

“We are a keen bunch and want to ‘strike while the iron is hot’ to capitalise on last week’s function, which was wonderfully hosted by Professor Helen Nicholson, [Development and Alumni Relations Engagement Manager] Donnella Aiken-Ferguson and our most flamboyant Tofilau Nina.”

The board considered a draft constitution, which had been prepared under the guidance of senior members of the alumni community at the Chapter’s launch in 2016.

“The aims and objectives of La O Samoa are a combination of support for the Samoa Otago Alumni, growing and strengthening ties with Otago formally and informally, and contributing to the sustainable development of Samoa.

“Our next step is to call all Otago alumni to pass the Constitution, register members and start plans to achieve our aims and objectives. We will work closely with the Development and Alumni Relations Office in our goal of getting as many 'Samoa Alumni and Friends' as possible to contribute and get involved in their local Chapter. The first item on the 'to-do' list is the 150th celebrations next year!”

Fanaafi came to Dunedin in 1991 when she was awarded a scholarship to attend the secondary school of her choice in New Zealand. 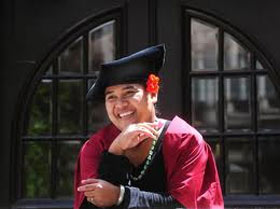 Fanaafi with her PhD regalia and gown in 2009

She chose Otago Girls' High School because two older siblings were at Otago Medical School. She was subsequently offered a scholarship to undertake a double degree in Law and History at Otago.

“I spent 20 years of my life in Dunedin. All my secondary and tertiary education – both my undergraduate and postgraduate studies. Dunedin is my second home and I often say I am Samoan-born and Dunedin-bred!

“The involvement and connection with Otago is therefore very deeply rooted for me; especially as my so-called 'formative years' were spent there. It is a beautiful campus and the micro-culture that is Otago and Dunedin is unique and not found anywhere else.”

After returning to Samoa in 2010 Fanaafi began work for the government as a Sector Co-ordinator for the Samoa Law and Justice Sector.

In January 2014 she became a Legal Consultant, but only a month into the job was promoted to Legal Manager for registration or the registry of international registered entities and was later made a Deputy Registrar of International and Foreign Companies.

“In 2016 our CEO sadly passed away and I was fortunate to be shortlisted and interviewed for the post. Cabinet approved my appointment in May 2016 and I began my three-year contract as CEO of SIFA.”

Fanaafi describes future involvement with alumni as a “natural response”, given the region and University have played such a large part in her upbringing and education.

“The place and people are part of my extended family. Being Samoan, we are BIG on family so associations and gatherings of this kind are the norm!”

Her family connection continues – Fanaafi’s niece is a first-year Health Sciences student, who hopes to follow Fanaafi’s brother and sister into medicine.

“Otago is part of our family's 'whakapapa' – our genealogy or 'gafa' as we in Samoa call it. And, though small, we have a footprint – a 'turangawaewae' of sorts – for our family at Otago and in Dunedin.

“It is early days but we believe that with the Lord's guidance and grace plus the strong 'heart of a Scarfie' - La O Samoa can make a difference! OTAAAAAGGGGGO!”

Guests were reminded of the significance of Otago’s 150th anniversary celebrations, which will be held in 2019, and the 150th Anniversary Pacific Celebrations in March 2019.