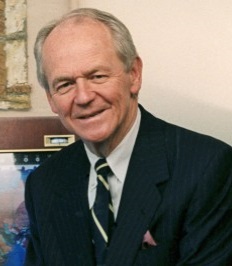 A distinguished medical alumnus with strong links to Otago’s American-based alumni chapter is in Dunedin giving several presentations and seminars this week.

Professor Sir Murray Brennan, an eminent surgeon with special expertise in the treatment of soft tissue sarcomas and endocrine tumours, is at Otago as inaugural Dunedin Basic Medical Sciences Trust John Borrie Professorial Fellow between 29 May and 2 June. During his visit to the Department of Surgical Sciences Sir Murray will provide lectures to medical students, senior clinicians and the general public.

While at Otago Sir Murray, who graduated with a BSc in 1961 and an MBChB in 1964, served as Otago University Students' Association president and was a University representative rugby player. He also played 12 games for the Otago provincial rugby team during the 1964-65 seasons.

His involvement with the University continued after he relocated to the US; he was Alumni of University of Otago in America Inc (AUOA) President from 2008 until 2013, and was one of the founding members of the board that established AUOA as a legal charitable entity in the US. He is now an inaugural member of the AUOA Honorary Advisory Board.

He held the Chair of Surgery at the leading US cancer research institute, the Memorial Sloan-Kettering Cancer Centre from 1985 to 2006 and is now Vice President of International Programs and Director of the Bobst International Centre.

The Dunedin Basic Sciences Medical Trust has created a Professorial Fellowship in the memory of the late Professor John Borrie, a renowned thoracic surgeon and professor of surgery at the University of Otago’s Dunedin School of Medicine.