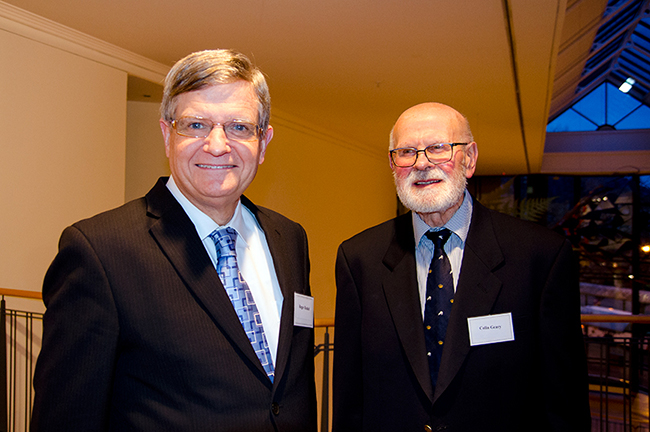 Harnessing “big data” would enhance the accuracy of treatment decisions for cancer patients visiting Professor Roger Reddel told alumni, academics and the public at an event in Dunedin last week.

Speaking at the Colin Geary Professorial Lecture, held at Dunedin’s Public Art Gallery last Thursday, Professor Reddel said while it has long been understood that individual cancers may require specifically tailored treatments, “there is still a long way to go.”

Deciding on relevant or more effective treatment regimens may be made easier by recent technological advances, which have made produced “enormous quantities” of data about the molecules inside cancers.

The University of Sydney Director of Children’s Medical Research Institute says computer analysis has allowed doctors and researchers to make sense of this information, and greatly enhanced understandings of cancer; this may lead to more accurate treatment decisions for individual cancer patients.

Since 2014 the Colin Geary Professorial lecture series has been held to celebrate the work of Dr Geary who was Assistant Director of the then-MRC from 1984 to 1992. During his time as Head of Department of Pathology, Dr Geary developed a strategic plan for the Department.

Dr Geary was also instrumental in overseeing the merger of the departments of Pathology and Clinical Biochemistry, and the development of the Medical Laboratory Science Programme. Dr Geary's lasting contribution was to shepherd the transition of the Department from one focused on pathology services, to one of substantial research strengths.

ABOUT: Professor Roger Reddel BSc (Med), MBBS PhD FRACP FAA is the Director of Children’s Medical Research Institute (CMRI) and the Sir Lorimer Dods Professor, Sydney Medical School, University of Sydney. He also heads CMRI’s Cancer Research Unit and directs CellBank Australia. His research focusses on the molecular genetics of immortalisation, the process that allows cancer cells to divide an unlimited number of times. Professor Reddel was awarded the Ramaciotti Medal for Excellence in Biomedical Research in 2007, was elected as a Fellow of the Australian Academy of Science in 2010, and in 2011 received the NSW Premier’s Award for Outstanding Cancer Researcher of the Year. He is a director of Cure Cancer Australia Foundation and serves on editorial boards of a number of international cancer research journals, and on national and international scientific advisory panels.