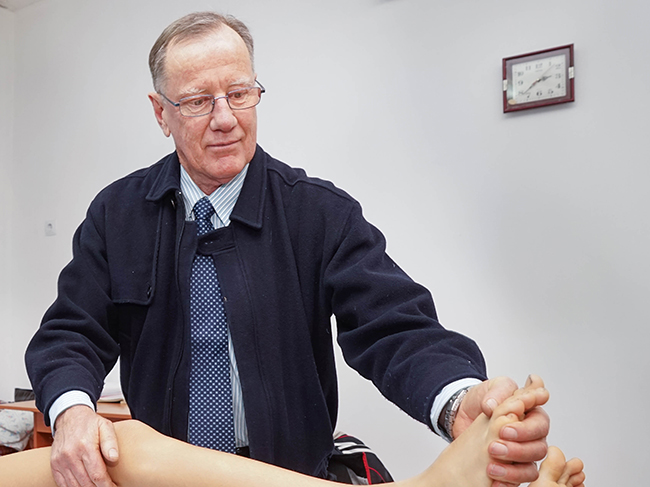 Otago medical alumnus Dr Nick Woolfield says self-reliance and self-belief – two attributes that were instilled in him during his medical training at Otago – are essential to his work with children with cerebral palsy in a remote region of Kyrgyzstan.

In July, Dr Woolfield received two awards – a medal and commendation from Kyrgyzstan’s Ministry of Health for progressing health in Kyrgyzstan, and a certificate from the Oblast (a local provincial governor) thanking him for the work he is doing at the Ak Cyy (a Soviet-era sanatorium located in a remote mountain valley).

Dr Woolfield did his clinical years in Christchurch, graduating with a Bachelor of Medicine and Bachelor of Surgery in 1978 and a Postgraduate Diploma in Child Health in 1982.

“There were some key people who challenged me to develop my clinical skills. The three that I particularly remember, who emphasised the importance of getting good clinical skills and honing them well, were Ross Bailey, Don Beavan (then Professor of Medicine) and, most of all, George Abbott.

“George was particularly astute in his clinical and deductive skills; assessing what needed doing and what needed not to be done. Now that I’m somewhere with limited investigative abilities I am glad that these people assisted, inspired and challenged me to continue to improve my clinical skills – which is mostly what I have to use in decision-making where I am now.”

Dr Woolfield’s work in Central Asia is collaborative and achieved with input from many people and agencies, including UNICEF and JICA (a Japanese Aid Group). Several agencies and governments provide grants and assistance, including New Zealand and Australia, and the programme is supported by the Ministry of Health.

He hopes to remain in Central Asia and continue this work for at least two more years but “may manage more.”

“The work involves some research, teaching, clinical work and assisting with the writing of national guidelines and policies so is challenging and rewarding.”

The following article is reproduced with the kind permission of Sven G. Simonsen and was originally published for UNICEF.

The number of children with cerebral palsy is several times higher in Kyrgyzstan than in Western countries. At a Soviet-era sanatorium, located in a remote mountain valley, an Australian paediatrician is introducing new approaches to prevention and rehabilitation.

‘We’re making steady progress, introducing treatments that work and stopping ones that don’t’, says Dr. Nick Woolfield (62). He came to Kyrgyzstan in 2013 as a volunteer with the Scientific Technical and Language Institute (STLI), together with his wife Fay, after practising as a paediatrician for 30 years in Australia and New Zealand.

That Woolfield became affiliated with Ak-Suu sanatorium, in the country’s eastern Issyk-Kul province, was in part a coincidence. But once here, his engagement quickly grew.

Three years on, Woolfield, together with colleagues at Ak-Suu, and in partnership with UNICEF and the Ministry of Health, has made impressive headway for Kyrgyzstan’s children with disability. 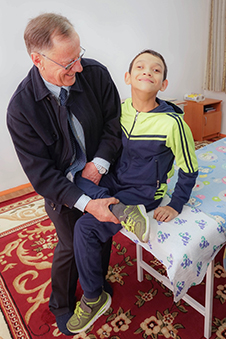 Ak-Suu is a department of the provincial hospital, but serves clients from around the country. At any one time, up to 130 children are here for rehabilitation. Children usually come here with their mother, for two weeks at the time, twice a year.

One of many beneficiaries is Tahmina Asanova, the mother of Arshat (7), who has cerebral palsy.

‘Coming to Ak-Suu was a revelation to me’, Tahmina says. ‘One of the critical things I have learnt, is to work on the field of opportunities – to find what can be improved, in order to build the child’s independence.’

Traditionally, disability in Kyrgyzstan is diagnosed as an either-or condition: a child either has it or it doesn’t. Woolfield has introduced to the country an international methodology for classification of disability by different kinds of functionality (ICF).

In 2015, three Allied Health specialists from Brisbane came and trained, together with Woolfield, 28 Kyrgyz professionals in diagnosis and management of cerebral palsy, including the ICF methodology. Based on ICF classification, an individualized rehabilitation program can be developed for each child.

Tahmina, an economist, is now completing her second degree, as a speech therapist; she is already practicing with children in Bishkek, the capital city.

‘In my work, I see many cases where parents only start to realize that something is different when their child is around three years old, and does not start to speak like other children. By then, valuable time has been lost. Programs to improve speech, motor, and other skills are most effective in the first three years of a child’s life, when the brain develops extremely fast.’

Dr. Woolfield estimates that between a third and half of the children he sees at Ak-Suu have a level of disability at which they could go to regular school. A much smaller number actually do so. Once children have a ‘disabled’ label, schools are reluctant to accept them. There is also a reluctance to accept that these children can actually do well at school.

Many children with disability are kept at home, or sent to institutions, as families see them as an embarrassment. And mothers are often blamed for their child’s condition; many – probably a large majority– end up being divorced by their husbands.

Rehabilitating children with disability is one main area of Dr. Woolfield’s work at Ak-Suu. The other is to help develop management guidelines and government policies to reduce the number of children who become disabled. It is a step-by-step, evidence-driven process:

‘One of the first things we did, in 2015, was to collect and analyze data on the children who come here. That material has proved amazingly helpful’, Woolfield says.

One thing he and his partners found, was that many children who came to hospital with acute illness ended up with brain damage. In response, Woolfield in 2015, together with UNICEF, initiated training in paediatric advanced life support (PALS) for 24 specialists nationwide. Nine of those were later mentored to become trainers, and have since trained 150 more doctors. Monitoring shows that those who have been trained in PALS perform at least 30 per cent better than those who have not.

The PALS training was one of Woolfield’s first collaborations with UNICEF, who recruited the specialist trainers from Lithuania. Woolfield stresses the role UNICEF Kyrgyzstan has played in supporting his work, and particularly points to its Chief of Health,

‘Most of the things we have done here have evolved from my conversations with Cholpon. It has been a very productive collaboration’, Woolfield says.

Four out of five of children who come to Ak-Suu have cerebral palsy (CP). The incidence is three-four times higher in Kyrgyzstan than for example in Australia, by the best estimates:
‘In one month here, I see more cases of dyskinetic CP – probably the most disabling form of the condition – than I have in 30 years in Australia’, Woolfield says.

‘And these cases, which mostly affect children result from severe jaundice, and some from mother-child rhesus incompatibility, are mostly preventable, at a low cost.’

One of Woolfield’s current projects is to establish a national database of cases of cerebral palsy, built on the Australian database model, with high-quality data to give guidance as to how to prevent cerebral palsy where possible, and to see what resources might be needed to manage the condition in the most effective way. Already, he has compiled data on more than 500 children, and important findings are emerging.

As it is expanded, additional data may be added, including for school attendance – and domestic violence: ‘Based on what we hear, half or more of the mothers of children with CP were exposed to violence during the pregnancy. We want to collect solid data on this, and explore what might be the connection between the violence and the disability’, Woolfield says.

Ak-Suu sanatorium is located in an area with no mobile coverage. That has not stopped Woolfield from pursuing another project: telemedicine. With Australian government funding, an 8-10 km fiber optic cable has been laid from the nearest village. The cable ends in a room fully equipped for telemedicine. Woolfield aims to connect to a number of medical institutions – primarily in-country, but also to Australia – for consultations and education.

‘One thing I’d like to do, is to introduce weekly web trainings where every doctor involved in rehabilitation participates. Continued learning should be seen as part of the job’, says Woolfield, who taught 4-5 training sessions a week when he worked in Australia.

Keeping in touch with home

To make calls from Ak-Suu, staff have to use applications such as WhatsApp and Skype. On the plus side, those calls are free – allowing Woolfield and his wife Fay to stay in touch with their children and grandchildren in Australia and Canada.

‘It’s really making it possible for us to stay here this long’, Woolfield says, picking up his smartphone to show a photo of a baby girl: ‘This is my granddaughter, born last Saturday. I got this photo today, real-time, from Australia.’

Recently, Woolfield and his wife bought a house in the nearby village, complete with chickens and a substantial need for maintenance. They two of them don’t expect to return home for some years still, he says:

‘And before we do, I would like to see new leaders emerge to continue what we have started.’