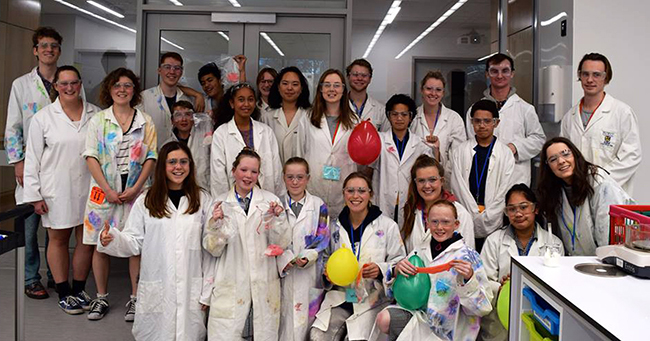 The student-led Aspire mentoring programme is living up to its name by making higher education accessible and fun.

During the programme – which is a joint venture between the University of Otago Volunteer Centre, Otago Community Trust, and Te Rūnanga o Ōtākau in Dunedin – Year 7 and 8 pupils from Dunedin schools meet with a student volunteer ‘coach’ for two hours after school, twice a week, to complete a range of campus-based activities.

This year, Aspire teams have played sports at Unipol and taken part in orientation-scavenger hunts around the Dunedin campus. A recent highlight was an afternoon spent in the new Mellor Laboratories where pupils made gels with various textures, held a tower building competition and blew up balloons with dry ice.

Student volunteer and third-year Bachelor of Commerce student Kate Skinner says the idea of supporting young people who are unsure of their potential, or who need someone to talk to about other aspects of their life, motivated her to volunteer for the programme.

“I wanted to support a younger person who may be going through a form of hardship. I remember being that age and having self-esteem issues, and I would definitely have benefited from this type of programme. Aspire was my opportunity to give back.”

History honours student and “fizzer” Rosemary Dore says the pupils’ on-campus activities and the preparedness of the student volunteers are carefully managed by a team of co-ordinators.

“Our student volunteers want to motivate their younger peers to stick with education so they see future study as possible, even if it’s not at university. Hopefully, by demystifying the university campus and opening their eyes to opportunities, ultimately the whole community will benefit.

“The programme is also about encouraging confidence, ensuring everyone has a great experience and that participation is manageable and fun for both the pupils and the students,” Rosemary says.

Other schools could be included with more funding in future, but the UVC and student volunteers are committed to growing the Aspire initiative in a “considered and sustainable way”, to ensure the programme’s quality is maintained, she says.

Sze-En says alumni who supported the programme in its current form should take a bow.

“Appeal funding would enable the magic of the Aspire Programme to go further, connecting more young people in the Dunedin community with university students who are passionate about learning and contributing to positive social change.”