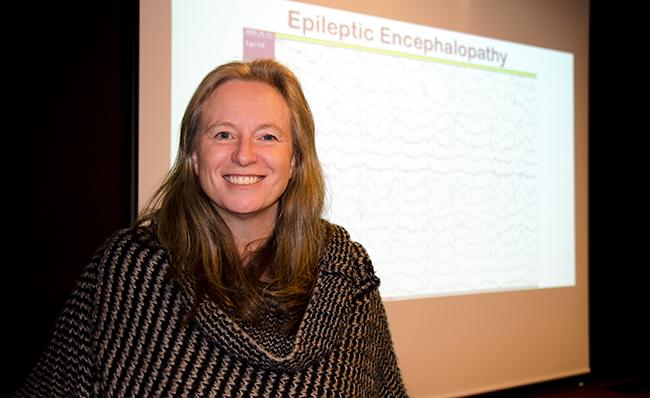 From demons and exorcism to targeted therapy based on genetic coding – University of Otago Associate Professor Lynette Sadleir explored the fascinating story of how understandings of, and treatments for, epilepsy have progressed over time at a public lecture at the Dunedin Public Library on June 6.

In the lecture, which was the official start of the 12th Annual Brain Health Research Centre Conference events, Associate Professor Sadleir discussed epilepsy's prevalence – it is the country’s most common serious neurological illness, affecting an estimated 38,000 New Zealanders of all ages – and recent important research into the genetics behind the condition.

“A hallmark of epilepsy is recurrent, unpredictable seizures and, although many with the condition live relatively normal lives, one third of individuals will have seizures that will not respond to available medications and have major social, psychological, physical and cognitive consequences,” she says.

Assoc Prof Sadleir leads the Epilepsy Research Group at the University of Otago, Wellington. The group’s research has shown that most epilepsy is caused by genetic changes resulting in abnormalities in brain function, which ultimately cause seizures.

As the lecture title suggests, she also discussed how superstition and pseudo-scientific ideas on epilepsy once saw amulets, charms and even exorcisms employed to stave off seizures. More recently, as science has revealed more about epilepsy’s genetic causes, novel treatments such as cannabidiol have emerged.

“Our genetic discoveries are crucially important to increasing the quality of life for individuals with epilepsy. The gene discoveries have quickly become part of clinical diagnostic testing, reducing children’s exposure to invasive and expensive investigations,” she says.

Using "real-world" examples of patients from her own clinical work, Associate Professor Sadleir explored how these discoveries may help with the delivery of precision therapies, which are increasingly possible as identifying dysfunctional genes affords insights into the biology causing seizures and epilepsy.

“We are starting to identify drugs marketed for other disorders that also have specific function related to the underlying problem in genetic epileptic encephalopathies. This will allow us to treat the root of the disorder. The other new therapy that is receiving considerable media attention is CBD, one of the chemicals that is derived from the marijuana plant.”

Research in this area presents many exciting possibilities for future breakthroughs.

“Our research objective is to continue to discover and refine epilepsy syndromes and their causative genes. The ultimate aim is to provide targeted therapy options that improve the lives of children with epilepsy and their families.”

Associate Professor Sadleir will join about 100 other researchers and healthcare professionals at the 12th Annual Brain Health Research Centre Conference on 7 June. Conference topics include genotyping and phenotyping the brain, modulation of brain circuit function, and neural circuits and behaviour.

BHRC Director Christine Jasoni says the conference - entitled Decoding the Brain: Insights into Health and Disease - will highlight and share the excellent and innovative work Otago researchers do on brain health and disease “across the whole spectrum of brain health research.” 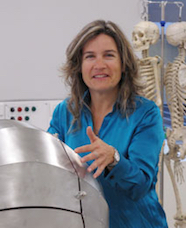 “The conference themes reflect what the Centre is all about; and that serves as an umbrella that sits on top, and is a focal point, for all the exceptional Neuroscience research that’s done by staff at Otago, across all of our campuses.”

Academics presenting at the conference will cover the whole gambit of activity in this dynamic area, and will include clinical and paediatric researchers who look at early-life neuroscience and how the brain forms, through to those exploring how the brain regulates essential processes such as body weight, and still others who study a variety of neurological diseases such as epilepsy, Parkinson’s, Alzheimer’s and other age-related conditions such as stroke, she says.

“It is important to highlight the wide-ranging work that’s being done because it transcends all areas of basic and applied neuroscience research. Our people are trying both to understand what happens when the brain functions normally, and when it functions abnormally, is injured or degenerates.”

We are trying to develop effective strategies for early diagnosis of brain diseases, such as dementia, to find therapeutic methods that can prevent or cure brain disease, and to ask exciting questions about what happens if the brain, through accident or stroke, is so damaged it dies, and how we can regenerate and regrow these areas so that the brain functions normally again.”

Many Otago alumni and supporters generously made donations to the BHRC through our 2017 Annual Appeal - we thank you for giving to help the Centre continue its excellent work on Alzheimer's.