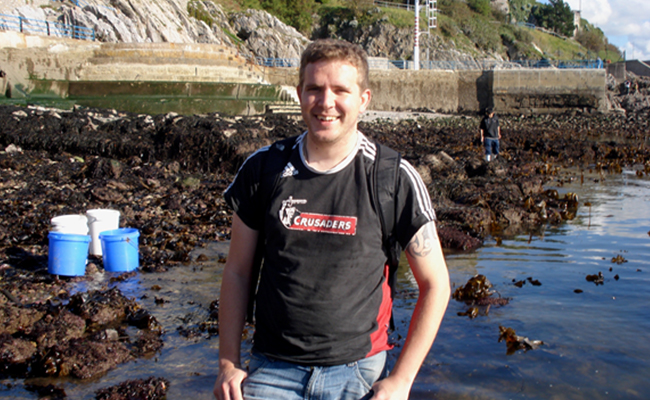 After 10 years of work and study overseas, Dr Nathan Kenny (Ngāi Tahu, Te Ātiawa) is “over the moon” to be coming home to take up a Rutherford Discovery Fellowship at the University of Otago next year.

“It is tough getting a scientific position anywhere nowadays, and to get one back home is fantastic.”

Dr Kenny, an Otago graduate, has been awarded the five-year, $800,000 fellowship for research into the genetic basis of resilience to climate change and ocean acidification in cultured kuku (green-lipped mussels), from genome to embryo.

“It is a huge opportunity. There are very few vehicles that bring you to New Zealand not just with a job but also with the capacity to build a team,” says Dr Kenny, who is currently working at Oxford Brookes University in the UK.

“This obviously has fundamental importance to our role as guardians of these animals – we should use every tool at our fingertips to ensure that this species, which are taonga in every sense of the word, are looked after for generations to come.”

“The Rutherford Fellowship will not only support me personally but allow me to create a bit of a research ecosystem which I am super-excited about. There are lots of great people who have helped me with the application and will be part of the research, at places like the Cawthron Institute, Genomics Aotearoa and AgResearch, as well as in Otago’s Biochemistry department, and I feel I owe them for their faith in me!”

After graduating from Otago with a BA in Philosophy and a DipLang in German in 2008, and a BSc(Hons) in Genetics in 2009, Dr Kenny went on to receive his DPhil in Zoology from the University of Oxford in 2014.

While primarily science-focussed, he took Philosophy with an eye to going into Bioethics, which is on the back burner for now but may resurface in the future. During his undergraduate degree he went on exchange to Germany, and studied German because he originally wanted to do his PhD there. He applied for two German universities, and the University of Oxford.

“And Oxford said we’ll take you but you need to say yes now.” So he did.

He did postdoctoral training at the Chinese University of Hong Kong and received a Marie Skłodowska-Curie Fellowship in 2017 to conduct research at the Natural History Museum in London, before moving to Oxford Brookes University in Oxford.

His current research involves working with a couple of worm species, using the new technique of single-cell sequencing to try to find out how they can regrow major body parts after damage. The technique allows researchers to find out what genes are turned on and off in each individual cell within an organism, and he will use this approach on kuku in New Zealand. 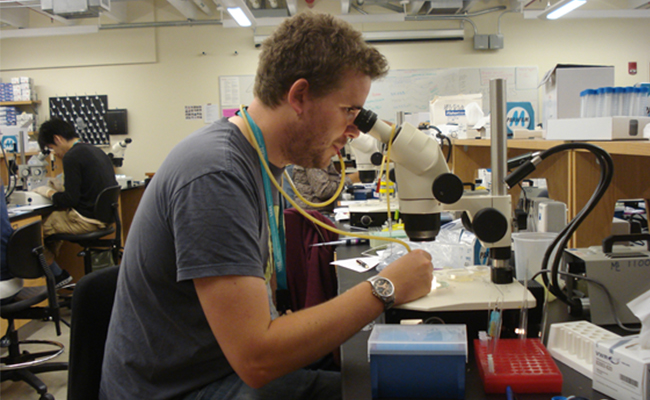 Dr Nathan Kenny will research the genetic basis for resilience in kuku.

Bivalve molluscs such as kuku are found in waterways throughout the world, and play key roles in filtering water, food webs and as ecosystem engineers. However, Dr Kenny says recently they have been challenged by rising temperatures and ocean acidification, which constrains their ability to construct shells.

“By looking at early embryos, hopefully I will be able to spot the exact adjustments they make to allow them to survive tougher conditions, at really precise detail.”

He says using single-cell sequencing, and other cutting-edge techniques and processes including assembling genomes and genotyping, will hopefully allow him to understand why some of them seem to be resilient to heat and ocean acidification stresses, and can survive these, while other kuku cannot handle the additional strain and die off.

“This will be useful both in aquaculture, allowing resilient strains to be identified and bred for use, and in tracking the possible resilience of wild populations to climate change over the next few years.

“This obviously has fundamental importance to our role as guardians of these animals – we should use every tool at our fingertips to ensure that this species, which are taonga in every sense of the word, are looked after for generations to come.”

Dr Kenny says one of the major benefits of the fellowship is that it will provide him with the capacity to build a team. “This project is a great chance to build something really impactful, using my background and the skills of a number of leading institutions in New Zealand science in a joined-together way.”

He is keen to nurture collaborative links with other stakeholders, particularly Māori, as the research will directly inform kaitiakitanga of this resource into the future.

“Doing scientific things I’ve always worked in large collaborative teams, but this is my first venture into the mixed scientific and commercial realm and I hope the scientific way of collaborating quite openly translates nicely into that.

“I think quite a cool thing about New Zealand science is there’s easier links and pathways for scientists to work with interested bodies and stakeholders in quite direct ways, rather than in the UK or US or bigger countries where things are much more siloed and people are cautious.”

As well as working closely with the Cawthron Institute, he will also collaborate with SPATnz. At Otago, while being based at the Biochemistry Department, he will link with the Zoology Department and marine scientists at Portobello. He is also a member of the Coastal People: Southern Skies research collaboration which connects communities with world-leading, cross-discipline research to support transformative change to rebuild coastal ecosystems.

“As well as allowing me to reconnect with my roots, the research for the fellowship will add to New Zealand’s future economic prosperity and help ensure the survival of some of our coolest animal species. It is a huge opportunity to establish myself and become a leader in this field, both in Aotearoa and internationally, and I can’t wait to get started.”