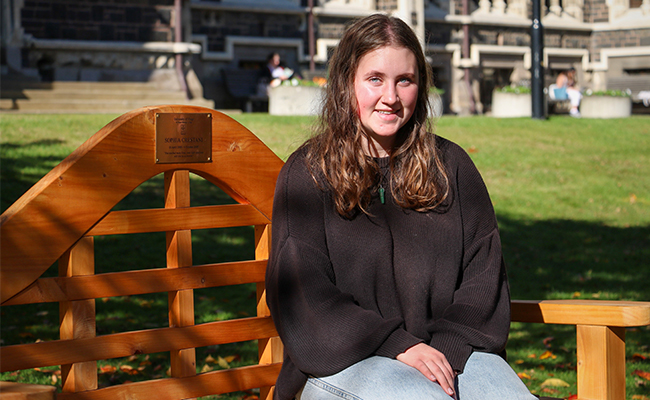 Established in 2020 in memory of Sophia Crestani, the first Sophia Michelle McMillan Crestani Scholarship has been awarded to Emilia Haszard, a second-year Bachelor of Science student majoring in Oceanography, with a minor in Mathematics. 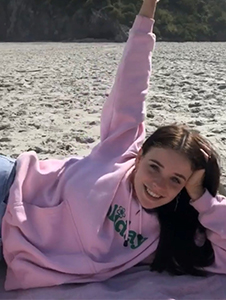 Sophia passed away in tragic circumstances at a student party in North Dunedin on 6 October 2019, and the scholarship has been established in her memory.

Emilia, who is from Dunedin, says it was “quite a shock” when she heard she had received the scholarship.

Emilia says the scholarship will mean she won’t have to work at her part-time waitressing job as much, giving her more time for her studies. “It will help me put more time and work into my studies. It will take a bit of pressure off and just help me knuckle down.”

Outside university, Emilia is a scout leader for the Anderson’s Bay Sea Scouts and goes along whenever she can to help out. She also plays the piano and flute and last year played percussion in a local brass band.

Sophia’s mother, Elspeth McMillan, was on the panel which awarded the scholarship last week.

“Sophia had so much potential. She had a wisdom and empathy beyond her years and you just knew she was going to make a really positive mark on the world,” Elspeth says. “So it's really heart-warming for us to know that through these scholarships she will continue to do that by supporting these young women to get their degrees and go out into the world.”

“She had the same interest in working with young children and she was bright and bubbly. She was down to earth and she understood where the scholarship had come from. I felt there was a personal connection there with her – with the candidate and Sophia and us – which was important.”

In addition to the scholarship, in July 2020 Sophia’s parents, and her twin sister Frances, along with the University, the Police and other Dunedin stakeholders, launched The Sophia Charter for Community Responsibility and Well-being to enhance safety and well-being of the student community in North Dunedin.

“I think of it like a ripple effect so each young woman that gets to benefit from the scholarship hopefully goes on to make positive contributions in her community and society for years to come. While Sophia may have lost her life, she actually will live on in perpetuity through the Charter and the scholarships.”

Sophia’s father Bede Crestani says they are really pleased to see the deserving young women out there who are going to make a difference to their communities and in their own lives.

“One thing we've talked about with Sophia is she had her own light spectrum. And you can see that in her friends and the community and the Charter partners. And now through the scholarships we are really pleased to see that continue.”

The scholarship, worth $4,500, is for a female second-year student studying Mathematics and/or Statistics who contributes to the community and has a financial need for support of their studies. Sophia demonstrated her innate ability in mathematics at an early age, winning the St Benedict’s School Mathematics Cup and an academic scholarship to Queen Margaret College.
Sophia was also a sporty and creative young woman, a people person who gave back to her community as a gymnastics coach and recreation coordinator.

The scholarship fund has touched the hearts of many and at the beginning of 2021 a total of $106,638 had been raised from donations and a contribution from the University of Otago to establish an endowment fund. Fundraising for a second scholarship is well advanced, and this will be awarded to a female second-year student studying any subject. Both scholarships are for second-year community-minded females, in financial need.

“I think of it like a ripple effect so each young woman that gets to benefit from the scholarship hopefully goes on to make positive contributions in her community and society for years to come. While Sophia may have lost her life, she actually will live on in perpetuity through the Charter and the scholarships,” Elspeth says.

If you would like to support these scholarships you can contribute to the Sophia Michelle McMillan Crestani Scholarship through our online donation form.