No two days the same working on the COVID-19 response 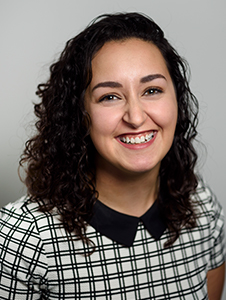 Working at the coalface of Aotearoa New Zealand’s COVID-19 response, every day brings new challenges for Otago alumna Tara Swadi, who is Chief Advisor Public Health within the COVID-19 Directorate at the Ministry of Health Manatū Hauora.

“I change with the tides for whatever advice is needed,” says Tara, who graduated from Otago with a Bachelor of Biomedical Sciences with Honours in 2016.

Over the past 18 months, her work has ranged from how to set up managed isolation systems, to providing advice on defining historical cases; the COVID testing and surveillance strategy; communications campaigns; responses to outbreaks; and contract tracing and testing capacity.

Right now, the portfolio she’s working on is “reconnecting New Zealand with the world”. This involves working across many different groups in the Ministry of Health, from the office of the Director of Public Health to the policy and operations divisions. It also means working outside the Ministry, with the Department of the Prime Minister and Cabinet; the Ministry of Transport; Ministry of Business Innovation and Employment; Customs; and Ministers and their offices.

“We saw something that needed doing and we just got on and did it and it feels very rewarding, and it’s fast-paced as well. There are certain skills you have to have as a person responding to an emergency - you have to be able to think fast and have resilience and be able to work under pressure and in ambiguity, which are all things I really enjoy doing.”

COVID-19 is the third public health emergency Tara has dealt with in her career so far. After studying Microbiology and Immunology in Dunedin, she moved to the Christchurch campus of the University of Otago and did her honours degree in the molecular basis of health and disease. She worked as a Research Assistant at the Christchurch campus for about six months, then moved to Ireland and completed her Master in Public Health with a focus on international public health, at University College, Dublin.

While academia was tempting, she decided she was “just a bit more of a people person, and so public health called”.

In September 2018 she shifted back to a job in Wellington in the Environment and Border Health team at the Ministry of Health, then in April 2019 took up a position in the Ministry’s Communicable Diseases team. During that time her work included dealing with both the measles and meningitis outbreaks, an experience she says set her up well for her current role. She started working on the COVID-19 response team in January 2020.

Luckily, she thrives on emergencies.

“Microbiology, public health and emergency management are three things that I am really interested in, so it all kind of came together.”

She says emergency management is very different to how teams usually work at the Ministry.

“Typically, in emergencies we work in a CIM structure – coordinated incident management. It’s a lot more military than you would normally think for a policy office like the Ministry of Health and I really like the ability to get stuff done.

“We saw something that needed doing and we just got on and did it and it feels very rewarding, and it’s fast-paced as well. There are certain skills you have to have as a person responding to an emergency - you have to be able to think fast and have resilience and be able to work under pressure and in ambiguity, which are all things I really enjoy doing.”

She also enjoys and highly values the people she works with. “Everyone who works on COVID in the public service is incredibly dedicated and works really hard. There are some people who have been working on this with me since day one who still put in 100 per cent every day and that’s just not something you see very often, so being able to work with those people is a real privilege.”

She and her colleagues work closely with Director-General of Health Dr Ashley Bloomfield, whose high profile during the pandemic has made him something of a national celebrity. This was brought home to her when she took a group of students on summer scholarships for a tour of the Ministry, and Dr Bloomfield stopped in the corridor and said hello. “And afterwards they all turned to each other and were quite starstruck!

“While he’s still very much the big boss, he is still just a common fixture [in our workplace], he’ll be in the kitchen emptying the dishwasher at lunchtime – in one of the few gaps he has in his very busy days.”

The work undertaken by Tara and her colleagues also has an important global aspect and they work closely with counterparts in Canada, the US and the UK, as well as with the World Health Organisation (WHO) and the Western Pacific Regional Office of WHO.

“Afterwards we went ‘gosh we’ve really learned a lot from that’. Because of the way we deal with COVID in New Zealand, we have some of the most detailed, well-captured and well-documented information about COVID transmission in the world. So, it was kind of our duty to share the things we’d learned globally.”

“We’re often sharing our experiences as well, because New Zealand has had quite a unique experience with COVID compared to other countries, even compared to Australia.”

One example of this is research undertaken into pre-departure testing, in collaboration with public health units, Environmental Science and Research (ESR) and Otago evolutionary virologist Dr Jemma Geoghegan.

“We were responding at the time, [saying] there’s lots of cases on the plane or in this hotel, so the research was essentially done as part of the response.

“Afterwards we went ‘gosh we’ve really learned a lot from that’. Because of the way we deal with COVID in New Zealand, we have some of the most detailed, well-captured and well-documented information about COVID transmission in the world. So, it was kind of our duty to share the things we’d learned globally.”

Tara initially thought she might like to go into Medicine or Dentistry at Otago, but Microbiology caught her attention – largely due to Otago’s Emeritus Professor Frank Griffin. “He was a joyous Irish guy who just had such a passion for microbiology, that, forgive the pun, he gave me the bug. He was amazing.”

She was also inspired by Professor Roslyn Kemp, convenor of the preparation for postgraduate study paper she took in her third year.

“She was such a strong female role model in academia, who was trailblazing and really looked after the students she was working with. She had that mentor-teacher vibe which was really wonderful.”

In Christchurch, two of her supervisors, Professors Stephen Chambers and David Murdoch, also influenced her path in terms of making her see what an academic could do beyond academia.

She hopes the raised profile and understanding of the importance of public health in the community continues. “People don’t really see it as a sexy science, because prevention is not sexy and it’s hard to quantify, but when you look at the impact of not preventing, it’s just so important.”

As for her future, Tara says she’s interested in the reform of the public health service in Aotearoa New Zealand and at some point would like to investigate different health systems overseas.

But for now, “there’s still a lot of work in COVID-land that needs to be done and the work’s not going to go away any time soon.”