Recent Otago Theology and Linguistics graduate Nicholas (Nick) List has been awarded a Harding Distinguished Postgraduate Scholarship to undertake his PhD in Theology and Religious Studies at the University of Cambridge.

We caught up with Nick, who takes up his three-year scholarship at Magdalene College in October, while enroute to the UK, visiting his wife Christina’s family in Arkansas, USA. The couple will live in an apartment close to the College, and Christina, an Otago Master of Teaching and Learning graduate, hopes to work as a primary school teacher. 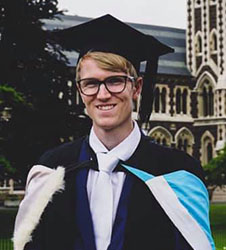 Firstly, why did you choose to come to Otago?

I did my high schooling in Geraldine and had family that had previously studied at Otago. It’s one of the few places in New Zealand that you can study both a Bachelor of Theology and another degree, so [for me that was] Theology and Linguistics. Even more so it offers the various languages that you have to master as a scholar of early Christianity – Ancient Hebrew and Biblical Greek and modern German. Basically, Otago’s the place to be to do that specialised language work and biblical study.

What did you study?

I studied for a Bachelor of Theology and a Bachelor of Arts in Linguistics (with a minor in Religious Studies). I subsequently did my honours in Biblical Studies and my MA in Linguistics. I love the interdisciplinary nature of these research areas. Whether that’s exploring the ways Greco-Roman rhetoric and discourse shaped the reception of Jewish heroes in early Christianity (my honours dissertation) or using machine-learning to investigate Ancient Greek categorisation (my MA thesis) – there’s a lot to keep you occupied!

Because biblical scholars are interested in ancient documents and the reading of these ancient texts which are in Greek and Hebrew and various languages, to be able to provide close reading of those texts you have to work in those original languages, so learning about linguistic theory as well as studying those languages is quite important.

What is it about this subject area that interests you most?

I initially came to study Theology from a faith interest. As someone part of a faith community, it was something I wanted to enquire more about. In some ways I didn’t really know what I was getting into and the historical study of religion and its ancient forms can be in some ways an overwhelming process, but at the same time it opens up a whole new world.

The world of ancient Christians is very dissimilar to our own world and yet I think has important things to say to us. To be able to hear voices that are very different from yours, removed from us in time and yet we can still enquire of them in our various ways, through reading their texts and reconstructing their thought world. It is important both for people who might have questions relating to their own personal faith but it’s also wider than that. I think the study of religion has important things to say to us all, regardless of our own backgrounds.

How did it feel to hear that you had received the Harding Distinguished Postgraduate Scholarship to the University of Cambridge?

After the initial shock (in all honestly, I thought they had sent the offer to the wrong email!), I was ecstatic. I knew that funding opportunities at Cambridge are extremely competitive, so to become a Harding scholar is a real honour.

I guess it was always an ambition to study in the UK, to do my PhD. The idea of studying at a top institution like Cambridge had been at the back of my mind, I thought it would be worth a shot, but I hadn’t expected to get a scholarship of this calibre. You apply to the university and they forward your general application and based on that the faculty of the department can recommend you for the scholarship. I hadn’t actually heard about the Harding scholarship until I received an offer for it.

What does the scholarship entail, and what will you be studying?

My PhD is concerned with the ways in which circumstances of probation (trials, testing, temptation) and agency were conceived in early Christianity. I seek to argue that the tendency in early Christianity to internalise evil (as opposed to externalised, demonic reification of evil), and correlative ethical appeals for moral progress are the result of Christian adoption and appropriation of Greek philosophical concepts. By taking the Letter of James as a test-case, I seek to show how these particular aspects of Greco-Roman thought helped to shape one mode of ethical discourse for Christians in the first and second centuries CE.

Basically, it’s about investigating the thought-world of the early first century as Christianity is developing, and there’s a lot of ideas swirling around from both Judaism, which Christianity develops out of, and the wider Greco-Roman world it’s situated in. There’s give and take and appropriation of various ideas that shape Christianity in quite profound and distinctive ways.

Why did you choose to apply for Cambridge?

Just the city itself is also part of the decision of choosing to go to Cambridge – including its proximity to London as a cultural hub of the UK. I’m just excited to be able to explore and have some of that overseas experience. I really do hope to do some travelling, that’s another great part of the scholarship, having that research allowance. It means that I can go to conferences and go to places of interest, so I hope to make the most out of those opportunities while being over there.

What direction would you like to take in your career, and how might the scholarship help you achieve that?

I would love to work professionally as a biblical scholar, teaching and researching in the area of early Christianity. Having a PhD from a first-tier university is going to be really helpful in terms of being able to progress with my career goals. I’m really thankful to have that opportunity.

Back to Otago now, were there any particular lecturers who inspired you?

I’ve been fortunate to have had some great supervisors and lecturers throughout my time at Otago. I’m especially grateful to Paul Trebilco (Professor of New Testament) for his encouragement and support in a myriad of ways – in helping me to publish my first peer-reviewed article, connecting me with my supervisor at Cambridge, and modelling a pattern of scholarship that is both gracious and academically rigorous.

The historical study of the Bible can sometimes prove to be a disorientating experience. Yet as a person of faith, I’ve ultimately found academic work to be invigorating, and a fruitful means of deepening my engagement with Christian Scripture. As a congenial and supportive environment, the Theology department at Otago has been a great place to undertake this kind of historical endeavour.

I really feel that Otago has given me a solid grounding in my subject areas – especially with regards to language acquisition.

As a recent graduate, do you have any advice for current students?

Otago has a lot to offer in terms of extra-curricular academics. I made a point of attending as many open lectures, graduate seminars, and academic conferences as I could. Seek out opportunities, let your lecturers know you’re committed – you may be surprised just how committed they are to you and seeing you achieve your goals.