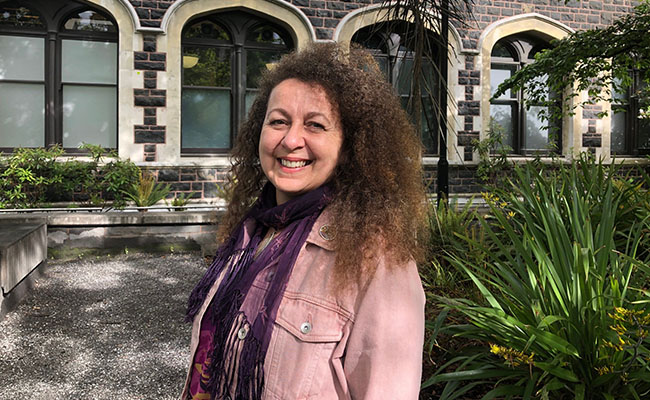 Starting her career as a community and hospice pharmacist in Hawke’s Bay, the Otago alumna took the chance to delve into crime writing when her children were little and she’d taken time out from her pharmacy work. “I used that opportunity to start doing some creative writing and just fitting 20-minute snippets in here and there.”

Wanting to know more about crime scene forensics for her novels, Vanda took a summer school paper in forensic biology. One thing led to another and she ended up doing postgraduate study, culminating in a PhD on the communication of science in crime fiction, neatly tying together her careers in writing and science.

“It married the best of both worlds for me, the creative novel side but then also the science inside the novels. The perfect marriage.”

After graduating with her PhD, Vanda continued her research career and today works fulltime as a Research Fellow at Va’a O Tautai - Centre for Pacific Health at Otago while writing crime fiction from home (with the odd foray into a café when she needs a change of scene). She’s also busy with her family and with sport – she competes at fencing and is a fencing coach – which means time continues to be in short supply.

“It’s like I’ve gone back to when I had the little babies. It’s snatches of time when you can, there’s no pattern, there’s no rhyme or reason. Then you find you’ve got a whole day off and you go ‘excellent I can do that’ and then it’s half-way through the day and you haven’t started yet because life and all those other things keep interrupting.”

Vanda says she always wanted to write, but when she started out she wasn’t sure what she was going to write about.

She had her husband’s stepfather and a neighbour to call on for information about the inner workings of being a detective and she was also accepted for a manuscript assessment process by the New Zealand Society of Authors. From there, things just took off.

The assessor said he loved the manuscript, Vanda took on board all his feedback “and then got cheeky and just submitted the novel as an unsolicited manuscript – all the things they say don’t do.”

The book was picked up by Penguin, the second publisher she sent it to. “So I was quite blown away.” Not only did they publish it, but they offered her a three-book contract, which was the first time they’d done that for a crime fiction writer in New Zealand. 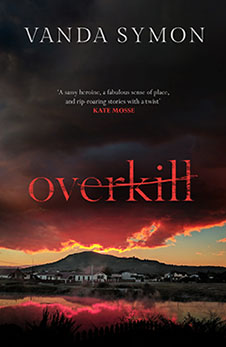 Although she was writing in Napier, she set her novel Overkill in Mataura, Southland. It is the first in her popular Sam Shephard detective series.

“I knew that for the story I needed a meat works and I needed a river. So I googled ‘meat works, river, New Zealand’, and Mataura was one of the first names that came up. As soon as I saw it, I thought ‘that’s the place’ because for the novel I needed somewhere that was small town and I wanted something that was heartland New Zealand.”

In the second novel of the series, The Ringmaster, she decided to move the main character to Dunedin, for the bright lights and the opportunities that a city brings. “And then as life would have it, we ended up moving to Dunedin.”

Like Ian Rankin’s Edinburgh, she regards the city of Dunedin as almost a character in its own right.

“Dunedin as a physical place is amazing. There’s hills and greenbelt and harbour. Architecturally it’s really interesting, it has all those Victorian alleys and old buildings next to new buildings. The weather is a whole thing in its own right; it’s constantly changing.

“And the students, they just add that vibrancy. They come and they go, they go for the holidays and everyone heaves a sigh of relief but then by about mid-January everyone’s going ‘oh I wish the students would come back’. As a city it has so many different elements which mesh together so well.”

Vanda is currently working on her fifth Sam Shephard novel, and now has a British publisher who has requested that she make the books “more Kiwi”. This includes more description of the physical environment, using Māori plant and bird names and justifying some of the slang – making it clear a singlet must be a singlet and not a vest, and jandals are not flipflops.

The publisher is keen for more Sam Shephard books and Vanda is excited about growing a readership in the UK. When Overkill came out in the UK in 2019 it was shortlisted for the Crime Writers’ Association John Creasey (New Blood) Dagger Award.

Day-to-day, she finds writing both “a bit of hard work and a bit of joy”.

“I juggle fulltime work with a fulltime writing career, with life and sport and everything else. You don’t have the luxury of the mulling and going with the flow quite so much; it can feel quite pressured.

She loves how her writing gives her “the freedom to explore all the weird ideas I have in my head” and she loves writing about people.

“It’s that whole human drama, I love that people are not one dimensional. I try to create my detective who’s not perfect, my villains who have things about them that people actually like, that people can relate to. Portraying a world in which people have to make hard choices and sometimes they don’t make the right choices. It’s just not simple and black and white because life isn’t.”

Also, she loves playing with words and language. “I think that’s one of the reasons why my novels always seem to see the humour. In some ways part of that is just that word play and fun.”

Her own life does come through in the novels, but it’s little things adding texture rather than lifting whole experiences.

“For example, Sam Shephard just squeaks in over five foot four so she’s physically small. That’s purely my mum because my mum was very small, but she was small and mighty. She always used to say that one of her insecurities was that she felt people didn’t take her seriously and I sort of turned round that a wee bit and thought ‘well if people don’t take you seriously, they can underestimate you’ and that can be a strength.”

While starting a new novel project can be intimidating, thinking about the enormity of 80,000 words ahead of her, she says hasn’t really experienced writers’ block. Sometimes it’s helpful to decamp to a café for a change of scene, and she has developed a tea tray ritual which helps her focus on her work.

“It’s almost like mind-mapping. Drinking coffee, eating scones and throwing ideas around in my head. Writing lists. That’s just like a wee refresher and a battery recharge. Then I go back home and at home I have a little tea tray ritual – I make up a tea tray with a teapot, I’ve got quite a vast collection of frilly tea china. I’ll go out to the garden, pick some flowers, try and colour match the china to the flowers to my milk jug to my teapot.

“It’s just like a ritualistic thing which is like a signal to my head – it’s writing time now and it just makes me feel good.” 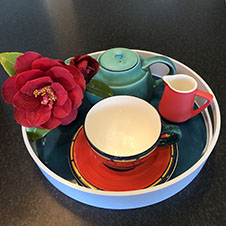 One of Vanda’s tea trays

She posts photos of her tea trays on Instagram and thinks as many people follow them as they do her posts about writing.

In her other fulltime job as a researcher at Va’a O Tautai, Vanda is currently working on an ethnographic study looking at access to medicines for Pasifika people. She is also completing research looking at the needs of Pasifika families affected by age-related cognitive impairment.

Her father was Fijian and Vanda says the research role has helped her reidentify with her Pasifika heritage, and she is grateful to Otago for opening those doors.

“Coming back here brought me a whole new career path I never expected, with health research. I absolutely love working at Va’a O Tautai; I can’t wait to get to work in the mornings.