Among those at the gathering were Professor Seddon’s three children, sons Mike from Auckland and Philip - Professor of Zoology at Otago – and daughter Annette from Queenstown, along with two of his grandchildren. 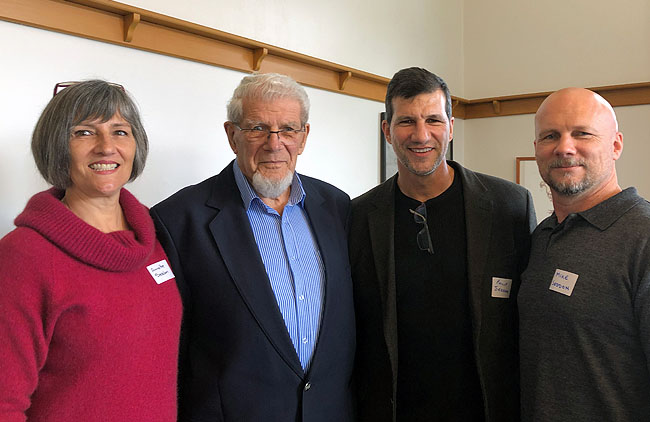 Emeritus Professor Richard Seddon with his children (from left) Annette, Phil and Mike.

The first time Professor Seddon (senior) set foot in the staff club, or Registrar’s office as it was then, was to enrol for his medical Intermediate classes 70 years ago, in 1949.

“There were only 2000 students in total when we were going through university, it’s 10 times more crowded today.”

Richard Seddon with his parents Jack and Alice Seddon on his graduation day in 1954.

As a student at Otago, he recalls doing his Chemistry classes in the old medical school building in the quad (now Geology) and going over to the Medical School in Great King Street for the rest of his classes.

“Later on, as a professor I tried to come over and use the old building, so students could mix with the rest of the university campus. I always felt very proud of the old University buildings and found them fascinating.”

As well as studying for his degree, he helped reinstate the tramping club, which had been in abeyance for some years, taking trips into the Silver Peaks area and up the Rees Dart near Queenstown.

He enjoyed classes from Professor of Surgery Sir Gordon Bell, and describes one of his Anatomy professors as “an outstanding teacher, but he terrified me. He used to glower at people, having to do an oral exam with him was quite a major hurdle”.

Once he got into fifth year, he began doing Obstetrics and Gynaecology with Professor Laurie Wright, the second professor to hold the position.

“Things came around full circle when I returned to Otago as the third professor of Obstetrics and Gynaecology.”

He trained in the UK for five years, at the Newcastle-upon-Tyne University hospitals, which he says provided “tremendous postgraduate work. There was masses of work, it was where I learned my trade.

“They had a great attitude to New Zealand graduates, which at that time meant Otago graduates.”

Returning to Auckland, he was recruited by the University of Auckland when it started up its own medical school.

“I saw the first intakes graduate and then became the foundation Obstetrics and Gynaecology professor at the clinical school in Wellington.”

He held this post from 1975-1981, when he moved to the Otago Medical School in Dunedin.