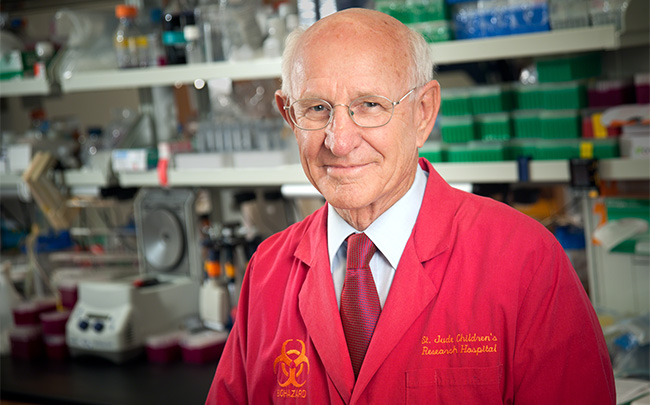 Two things happened to Dr Robert Webster while he was a student at Otago that have shaped the course of his life.

The first was a Saturday lecture to the Chemistry Club by Professor Molly Marples from the Department of Microbiology.

“She talked about the possibility of transmitting diseases from animals to humans, and where the microbes that affect humans come from,” he says down the phone from Memphis, Tennessee. “It really got my interest, having grown up on a farm and having dealt with animal diseases.”

Dr Webster grew up on a farm at Pukeawa, 16km up the Clutha River from Balclutha, one of a family of 13, and went to Otago initially to study chemistry – largely because his elder brother had. His interest caught by Dr Marples, he went on to gain an MSc in Microbiology, graduating in 1957.

The second, and “the most important thing” that happened while he was at Otago, was joining the tramping club and going on a trip to Trotter’s Gorge in the Waitaki.

“It rained all weekend, the creek flooded and we had terrible trouble getting out, we had to put ropes across the river.”

One of the tramping party he helped across the swollen creek was Home Science student Marjorie Freegard. “That weekend I met my wife by pulling her out of a flooded river.”

Dr Webster went on to become president of the tramping club, and continued to incur the wrath of the Dean of Home Science by delaying her students from their studies while on tramping trips, including once being caught by the outgoing tide at Stewart Island, unable to catch their boat and needing to make a three-hour walk from Halfmoon Bay to Oban.

Sixty years, three children, eight grandchildren, and a distinguished international career as a virologist later, Dr Webster has just published his personal account of a lifetime’s work figuring out where pandemic influenza viruses come from and how they spread to humans.

‘Flu Hunter: Unlocking the Secrets of a Virus,’ is a lively, comprehensive tale of his pursuits and scientific work in tracking down the virus. Topics covered range from the effect of the virus on the soldiers and the outcomes of the First World War, through to adventurous family trips to the Great Barrier Reef, the lakes of southern Alberta and Delaware Bay in pursuit of aquatic birds that may be host to the virus.

There are accounts of trips to the Arctic permafrost to exhume the tissue of Spanish flu victims, to Antarctica to collect samples from penguins and of time spent in high security laboratories while attempting to replicate the virus. There is ethical discussion as to how far such work can go without it becoming a biosecurity risk, and the importance of finding the balance between the need for knowledge to identify the virus and develop a universal vaccine, and the threat of bioterrorism.

Dr Webster first started work as a virologist with the New Zealand Department of Agriculture, became a research fellow at John Curtin Medical School in Canberra and after receiving his PhD moved to the United States.

His research into the flu virus began in the ‘60s, with the insight that the natural ecology of most influenza viruses is among wild aquatic birds. Tracking and testing of birds eventually led him and other scientists to establish a link between these virus reservoirs and human influenza pandemics.

His team isolated and identified the avian adapted strain of H5N1, the causative agent of H5N1 flu, commonly known as bird flu.

As well as a book of scientific discovery and rigour, Flu Hunter details the collaborative efforts of scientists around the world in their work to understand the influenza virus.

“Collaboration is one of the characteristics of the influenza global community; you can’t control influenza on your own,” he says. “It’s essential for the world to work together.”

The World Health Organisation (WHO) has reference laboratories in London, Atlanta, Tokyo, Beijing, Memphis and Melbourne, where knowledge of changes in the virus is shared, characteristics identified and recommendations made.

“It’s one of the greatest success stories of WHO.”

Dr Webster encourages all his young students to share everything when they are working with him.

In the course of his career, he counts as his major achievements the realisation of where influenza originated, and training young people to carry on the work.

“In the flu pandemic of 1957 we didn’t know where the virus was coming from. The realisation that it came from wild birds has been my main contribution to understanding the ecology of influenza.”

“I’m probably the only person who became a member of both royal societies by putting swabs up the butt end of wildfowl.”

Just back from the 100th commemoration of the Spanish flu in Madrid, Dr Webster says it is sobering to realise that after nearly 100 years of studying the 1918 influenza pandemic, we still do not know precisely why the virus was such a killer.

“We have made huge advances in our understanding, and in the development of medicines and vaccines, but we are not there yet.”

In his book, he says it is not only possible, but just a matter of time, before we have to face another flu pandemic like the 1918 flu.

“New drugs are in the pipeline for influenza which is hopeful, and a universal vaccine is in clinical trials.” But he says more research is vital, and that live bird markets, where the viruses breed, have to go.

Dr Webster continues his work in infectious diseases at St Jude’s Children’s Research Hospital in Memphis, and has spent much of the past year going from one meeting to another around the world, marking the 100th year commemoration of 1918 Spanish influenza.

At each meeting he says “we’re looking at where it will occur again, what to do in the future and where the gaps are in our knowledge.”

He also has a programme going in Bangladesh watching what’s happening in live poultry markets.

But for now, he’s going fishing. He and Marjorie are off to meet the family in Destin, Florida for the annual family fishing trip. “We’re hoping for a few bottom fish, some grouper or snapper.”


Flu Hunter: Unlocking the Secrets of a Virus, is published by Otago University Press, visit the website for more information