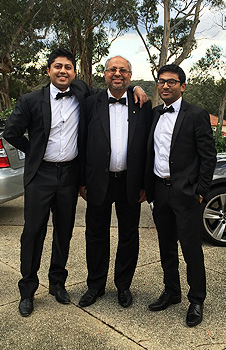 Sajeev Koshy, with his sons Jeeson (left), and Jithin (right)

An Otago education holds a special place for Associate Professor Sajeev Koshy OAM and his family.

He is a double Otago University graduate and both his sons completed their studies here, while his wife Rajini studied occupational healthcare at Otago Polytechnic.

Recently Dr Koshy was the Asia/Pacific region winner in the Times NOW and ICICI Bank Non-Resident Indians (NRI) awards in the professional category. Over 11,000 people were nominated for the awards, which were shortlisted to around 100 and then reduced to the final 23 winners from throughout most of the world.

“Endodontics involves a lot of pain management. You need the skills and patience to really diagnose properly and then manage the case based on individual requirements,” he says.

He spent five years studying full time at Otago completing a Master of Business Administration (MBA) and then a Master in Dental Surgery (MDS) in Endodontics.

He says that both qualifications have stood him in excellent stead, and his understanding of business operations has helped him have the big picture. At Otago he learned an emphasis on quality, particularly in the standard of care, and this prompted him to do his MBA.

“Studying the Otago MBA has helped me to better understand the public health system and therefore better carry out effective strategies and change management policies,” he says.

Dr Koshy was also heavily in the Otago University Students’ Association during his time here, including serving on three committees including the Board of Graduate Studies.

“As a family we are very proud that we came to Otago to study at what is the oldest university in New Zealand, and one of the best universities in the world.

“We all really loved Dunedin, and also being able to travel to the beautiful surrounding Otago countryside.”

His family moved to Melbourne in 2004 as the city offered greater professional opportunities. He was appointed Director of Dental Services at the Bairnsdale Regional Health Services, where he saw the average waiting period for dental care drop from 57 months to seven months in just two years.

Both his sons studied at Otago Boys’ High School and also completed their university studies at Otago. His eldest son Jithin completed his Bachelor of Medicine at Otago in 2008, and is currently a consultant cardiologist in Melbourne. His younger son Jeeson completed his Doctor of Clinical Dentistry in Endodontics in 2014 and also works as a specialist endodontist in Melbourne.

Dr Koshy’s desire to improve dental care has led him to travel around the world, including working in Hong Kong with Vietnamese refugees, the indigenous Qu’echi group in Guatemala, and in Kenya and Mexico.

He has a strong belief in universal dental care, and would like to see everyone receiving an adequate level of dental treatment, but is frustrated by the amount of damage people are doing to their own teeth.

“We can’t have universal dental care if we don’t take care of our own oral health. There needs to be less consumption of sugary foods and drinks, and daily brushing of teeth and flossing are essential.”

Dr Koshy has returned to Otago on several occasions to attend courses and present at conferences, and will always have a soft spot for the excellent education he received here.