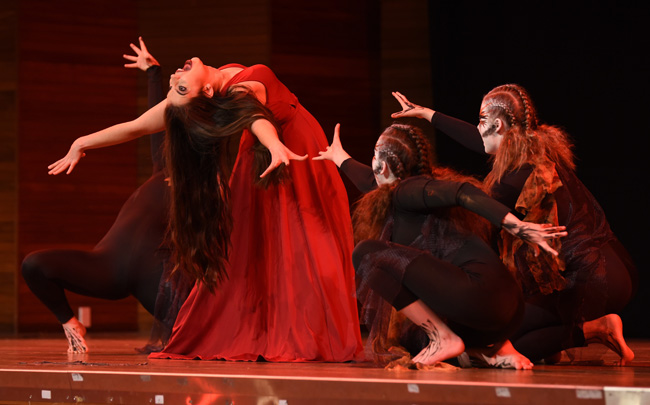 Queen’s High School pupil Juliette Bernard as Hecate, Queen of the Witches, surrounded by her familiars, in a 2016 performance of a scene from Macbeth. Photo: Brian Scurfield

During the week they will take part in an intensive theatre course, studying aspects of Shakespeare’s works and three of his plays Merchant of Venice, Much Ado About Nothing and The Life and Times of King John. Half their day will involve workshops and the other half rehearsals, culminating in public performances on 2 and 3 October at the University of Otago College of Education.

The students have been chosen from the 24 Regional and National SGCNZ University of Otago Sheilah Winn Shakespeare Festivals held around the country during the past few months and include the two winners of the Costume Design and Music Composition competitions held at the same time.

SGCNZ CEO Dawn Sanders says holding regional and national finals for the University of Otago-backed events was challenging during a “COVID-19 compromised year.”

“We hope to see many Dunedin residents at the performances to celebrate Shakespeare, our fine young actors, and an end to lockdown!”

Sanders says holding the final events at Otago’s Dunedin campus gives the pupils time to bond, help each other learn lines and develop characters, and interact with their peers from all over New Zealand.

“Also, in addition to using Otago’s facilities, University staff always welcome us so warmly, assisting in very many ways, including providing a tour and other ‘add ons!’. We also get great feedback from the very supportive public and we hope to see many Dunedin residents at the performances to celebrate Shakespeare, our fine young actors, and an end to lockdown!”

For several months about 2,000 pupils (in 300 groups) nationwide have been filming scenes for the SGCNZ Festival regional heats, which moved online due to the COVID-19 restrictions. Regional videos were uploaded in June, and assessors selected five and 15-minute scenes for the National Festival, which was also held online.

Half of the 49 students will be chosen to go to Shakespeare’s Globe in London in 2021, if COVID-19 restrictions in the UK allow it. 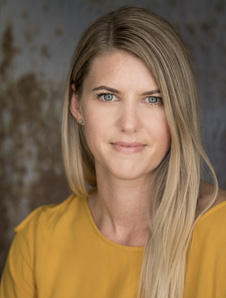 Otago alumna Anna Richardson, who attended the NSSP week in 2005, says the experience was the catalyst for her to go on to study Performing Arts at Otago. She graduated with a BA, majoring in Performing Arts in 2008, followed by a Graduate Diploma in Teaching in 2009. We caught up with Anna, who is now teaching Drama at Epsom Girls Grammar School in Auckland:

What were some of the highlights of taking part in the Shakespeare festivals and NSSP?

Being involved in the Otago University Shelia Winn Shakespeare in Schools regional and national festivals as a student gave me an entrance into the world of Shakespeare and an understanding his relevance as a playwright.

Seeing how students and teachers from around the country had interpreted his text in such innovative ways was inspiring and exciting, as was Dawn Sanders’ effervescent enthusiasm for the festival she has curated.

How did being involved in the festivals influence you personally?

Being selected to be part of the 2005 National Shakespeare in Schools Production (NSSP) week helped me to develop confidence in my own abilities, work with some incredible young actors, and learn from the best in the industry. It was also the catalyst into my journey to become a teacher and a director.

It was through these experiences that I found my place at Otago University studying Performing Arts and English Literature, followed by a Graduate Diploma in Secondary Teaching.

Where has your study of Performing Arts and teaching taken you?

The practical and theoretical education that I received from the Professors at Otago helped to expand my thinking and my world experience. As I entered the professional realm as a sole charge Drama teacher in Rotorua, I was also offered a place in the first Teachers Go Global trip to study at the Globe Theatre in London.

It would be an understatement to say that this experience was life changing. It forever changed the way I understand and teach Shakespeare in the classroom and the way I help students navigate the Elizabethan world.

What are you doing now?

I am teaching at Epsom Girls Grammar School in Auckland and hold the roles of Arts and Cultural Coordinator and Director of the Musical Productions, as well as teaching curriculum Drama.

The learning that I have done with SGCNZ and Otago University has shaped who I am as a teacher, given me the tools I need to be effective in the classroom and has taught me that being part of the ensemble is the best and most important place to be.

What do you enjoy most about teaching Performing Arts?

I love to help students come up with ideas and help them grow these into fully fledged performances, watching them shape their own opinions and become brave in sharing them, the same bravery my high school drama teacher Gabrielle Thurston, Dawn Sanders and my professors at university encouraged me to feel.

I also enjoy that I get to create work through directing. There is no bigger joy for me than watching something that is imagined in the dream space, be brought to life through collective work effort and I am lucky enough to feel that joy daily.