Sheila Langridge: Otago and other adventures

An unpublished memoir by one of our History alumni has delighted her grandchildren and given the Alumni office a treat. This is Sheila’s story of her time at Otago from 1949-51. 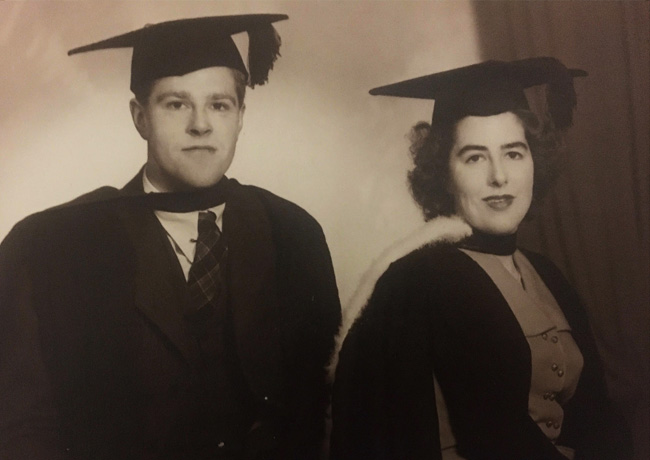 Hal Hay and Sheila Langridge (nee Hay) at graduation in 1952

History graduate, teacher and mother of four Sheila Langridge left a very special gift to her grandchildren after she passed away in February, aged 89. In the mid-1990s, Sheila set about writing down the stories and memories of her life and dedicated them to her nine grandchildren.

As a child, Sheila (nee Hay), with her sister Jean and her brothers Hal and Ian, moved around New Zealand with their parents, living in Eastbourne in Wellington, Dunedin from 1937-39, then moving to Te Atatu near Auckland in 1940 where her father established a poultry farm. After primary school, all the children were sent to boarding school: both boys to Waitaki Boys High School in Oamaru, Jean to Timaru Girls’ High School and Sheila to Nelson College for Girls at the age of 13.

In her memoirs, Sheila’s childhood adventures (and sometimes consequent punishments) are remembered with great clarity – from riding ponies and hiding in wardrobes to sledging down Cannington Hill Road in Dunedin on her mother’s enamel dish-draining tray after a particularly big snowfall. Often these escapades were shared with her older brother Hal, who, like Sheila, went on to attend the University of Otago, both graduating in 1952. 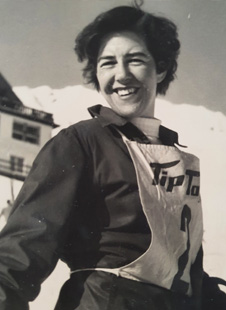 Sheila on the ski fields

One especially vivid memory features the discovery of what appeared to be a rusting bomb in tidal mangroves between Whenuapai and Te Atatu, which they took home so Hal could dismantle it and work out how it was made and what was inside. Hal went on to do his master’s in Physics at Otago, then studied at the University of Oxford and Harwell Atomic Energy Research Establishment. He proved Einstein's Theory of Relativity – his work in this area is cited in J. Bronowski's book The Ascent of Man. Now in his mid-90s, Hal lives in Canberra.

While at Nelson College, Shelia talks of spending holidays with other sixth formers at Lake Rotoiti and learning to ski at Mt Robert. “We took long walks to the head of the Lake and climbed the St Arnaud Range. This started my love of skiing and tramping in New Zealand’s outdoors.”

Although she says she was “naughty and often in trouble” she did well academically at College and especially loved history. She was in the Honours gymnastic class and played basketball, tennis and hockey, and in her last year was Deputy Head Prefect.

After gaining her University Bursary in 1948, the following year Sheila set off for Otago.

In an abridged version, we take up Sheila’s story about her time at Otago in her own words:

“In March 1949, Otago had a roll of 2,000 students, both men and women. It was many years later that I learnt with amazement that only two percent of the New Zealand female population attended university in 1949. Perhaps it was not noticeable to me, living as I did in a female student hostel and in classes which had a good sprinkling of women. St Margaret’s College (St Mag’s) took about 120 full-time, live-in students and there were other women’s colleges, the main one being Studholme for Home Science students.

St Mag’s was a Presbyterian Church women’s hostel, a sister college to Knox College which catered for men, mainly theological students. Rules were strict, especially for evening/night leave. We had to be in by 9pm unless special permission had been gained for being out later, for instance for Balls or picture theatre visits. No men were allowed in our rooms and all visitors had to be out by 9pm. Meals were served in the main dining-room except for Sunday mornings when we could collect bread for toast, tea/coffee and milk and prepare our own breakfasts in small kitchens available on each floor. Breakfast, and suppers too, were convivial affairs. Usually clad in night attire we would talk long into the night drinking cups of coffee and talking about everything under the sun, life in general, sex, religion, men and discussing the pros and cons of what we were studying. This was when we were sorting out what we believed and did our growing up. These discussions were what university life offered and was of the many benefits we were fortunate enough to enjoy. I loved it all and made the most of my three years at Otago.

Classes were huge, especially in the first year. Students packed into large lecture rooms with bare wooden floors, wooden desks, wooden benches, so unlike the comfortable, carpeted lecture theatres of the 1990s. Expectations had risen during the intervening 50 years. In 1949 the Prof or lecturer swept in, proceeding to lecture for the following 50 minutes talking and reading from his notes. We did our best to keep up, writing down the gems of wisdom as they fell. As seniority was gained, so class sizes fell and small tutorials were held to discuss essays written. Angus Ross, a senior lecturer in History [Professor of History at Otago from 1965-76] was a favourite of mine. His lectures inspired me and he continued to feed my love of history which remains to the present day. I worked hard and conscientiously spending a great deal of time in the University library. I do not think I fully realised at the time just how fortunate I was to be there. My mother always said that our father sacrificed a lot to pay for my brother’s and my education, and I was doubly fortunate that he was willing to pay for his daughters as well as his sons, because I have certainly benefitted.

Winter Balls and the Knox Spring Ball were highlights of the university year. Skating trips to the Manorburn Dam in Central Otago with a group of friends, sleeping over the weekend at Brenda’s [Brenda Watt, fellow St Margaret’s friend] home in Alexandra, and motoring back in an old jalopy on the Sunday evening, was marvellous fun.

My university years were very fulfilling. My experience was broadening. I was stimulated by new ideas, making new friends and generally maturing. By November 1951 I was sitting my final exams to gain my BA and the time had come to reluctantly leave Dunedin.” 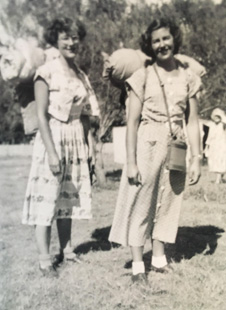 Sheila and Brenda during their job exchange in Australia

After finishing their degrees, Sheila and Brenda went on a job exchange to Australia, set up through the Otago University Students’ Association. After a few weeks’ waitressing in Melbourne to earn some money, the pair spent the summer hitch-hiking through Victoria, South Australia, New South Wales and Queensland – often catching rides in trucks, and one time on motorbikes.

“We had hitch-hiked thousands of miles through eastern Australia quite safely for six weeks out of a total of nine weeks away. In fact, we had found our drivers generous and interesting, often going out of their way to show us points of interest. They “shouted” us free meals and drinks again and again. We found it hard to return their hospitality. We found that their perception of New Zealand was that it was a country so earthquake-prone that was shaking “like a jelly”. We learnt that people treated us with courtesy if we treated them in the same way. I do not think hitch-hiking today (1996) would be so safe or so rewarding. It was a wonderful first-time travel experience which we relished, and certainly taught us self-reliance and gave us faith in our fellowman.”

Next time, they said as they arrived home, “UK and Europe”.

But first, Sheila trained as a secondary school teacher at Auckland Teachers Training College and Brenda went to Wellington to do her National Library training. Then, in January 1955, the two of them set sail for Sydney, via Sri Lanka, the Suez Canal, Malta, Eqypt and on to Southampton. They spent 13 weeks across the summer of 1956 hitch-hiking around Europe. The pair remained closest friends throughout their lives, with both their families eventually settling in Wellington. Brenda attended Sheila’s funeral in February.

In London, Sheila worked for a publishing house, and on the ship back from England met her future husband Don Langridge, who also went on to train as a teacher (Don became a recognised face across New Zealand TV screens, first as the old groundsman in the BNZ Cricket ads, and then as the barman in the Lion Red “red blooded” ads). After working at small rural schools, and having four children in five years, the family moved to Wellington in 1969.

Sheila ended her career running Early Childhood Education for The Correspondence School (now Te Kura), based at Wellington Teachers College. After finishing her memoirs, in 1999 Sheila went on to write the history From Sussex to Canterbury: The Story of the Langridge Family.