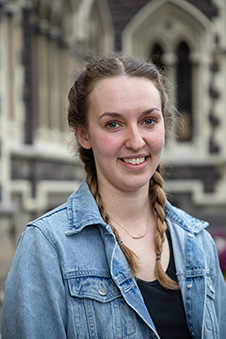 What was your reaction when you heard you’d received the award?

I was pleasantly surprised! I’m very appreciative to be included amongst this group of young alumni who are making such amazing contributions to their communities.

After graduating with a BSc in Neuroscience and Psychology, I continued straight into an honours degree, and followed that by starting a PhD (I’m one of those eternal students).

Since my undergraduate studies I have been interested in Alzheimer’s disease and researching potential treatments. My PhD project is investigating a novel gene therapy approach, which is a way of treating disease at the genetic level by causing cells to produce their own beneficial proteins that we hope will alleviate the problems caused by Alzheimer’s disease.

My main aim is to develop a treatment that could be given easily to patients, and be viably produced in large quantities, which are two major issues for treating neurological diseases that affect large populations.

My studies have led me on some exciting conference trips, which I am all the more grateful for now in the age of COVID-19. Last year my research was selected to be presented in a media conference at the Society for Neuroscience meeting in Chicago – I was one of 50 selected to speak out of 14,000 submissions. I spoke alongside four male lead researchers in the field of gene therapy, and was very honoured to be the only representative on the panel of not only my lab, but also of Australasia, students, and women in science!

I think scientists often have a weakness around science communication, because we dig so deep into one specific area that it can be difficult to step back and consider the big picture. At the end of the day, science research is done for the betterment of society, and it is our responsibility as the people who conduct the research to be able to explain this in a way that everyone can understand. What’s more, a lot of research in New Zealand is funded by the taxpayer, so it’s their right to know!

Throughout my studies I’ve helped with outreach events involving talking to the public about the neuroscience research conducted at Otago, as well as brain health in general. Since everyone has a brain (I think), people are very interested in what they should know about keeping themselves healthy, and about conditions that might afflict them or their family and friends.

I’m also really passionate about inspiring the younger generations into STEM (science, technology, engineering and mathematics) careers. At school I wasn’t exposed to much beyond the prescribed school courses and what I read from the library; I didn’t really have any idea of what being “a scientist” entailed, and I certainly never imagined myself being one.

We’re really lucky to have a neuroscience outreach programme in NZ that has been designed for school kids called Being Brainy, and I have had lots of opportunities to teach this to kids in Dunedin. It’s important for these kids to see how exciting and interesting science can be, and that not all scientists look like white middle-aged men in lab coats!

What were the highlights of your time at Otago, and has it helped you in following your interests?

Well since I haven’t left Otago yet these are still ongoing, but my main highlights so far are all the amazing opportunities that I’ve had to share my science with other scientists and the public, much of which has been possible due to generous funding from the University and Brain Research New Zealand who fund my PhD scholarship.

I also have to thank my friends from my research labs, classes, and hostel, whose friendship has made eight years of uni fly by.