Reflecting on a solid Otago foundation 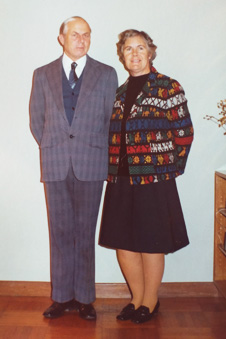 Lessons learned in the lecture halls of Otago University more than 45 years ago have helped guide the career of one of our country’s senior diplomats. Born in London, Stuart Prior was brought to Dunedin by his parents (Nona and Bill Prior) in 1952, for a better life. He attended the University from the late sixties to early seventies, and after a long career in diplomacy is currently Honorary Consul for Belarus.

“When my father grew up in the United Kingdom universities were for the privileged, and once he retired, he returned to Otago University to fulfil a lifelong dream, and completed his MA (on the architecture of pre-eminent Dunedin architect RA Lawson), in 1990.

Stuart says his father’s experience in New Zealand taught him that it’s just as important who you know, as well as what you know.

“Because he worked at Otago University, he wanted me to get an education as a foundation for life.

“I took a very unusual subject at university, that was Russian, which I had become familiar with through an extracurricular course taught at Otago Boys’ High School.

“I found when I met the Russian Department Professor Nicholas Zisserman that it was just like a door opening on to a world that I had vaguely heard of, that provided one of the keys to lifelong learning.” 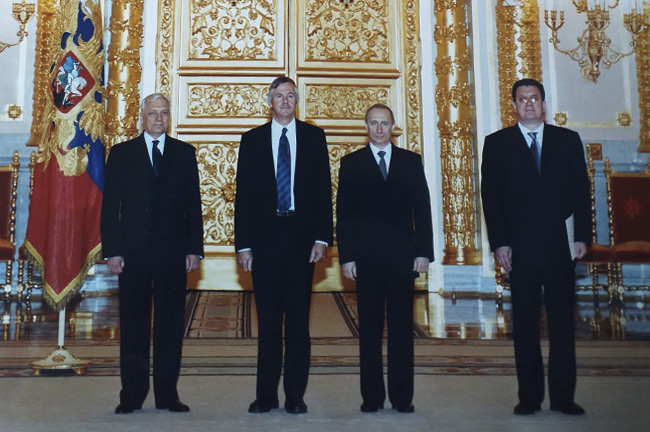 Stuart says he was privileged to attend courses by former Department of History Associate Professor Gordon Parsonson, who was a “superb presenter of history”.

“I think I was the first at Otago to do the four-year BA Hons in Russian. The education at Otago opened my eyes to the value of history, of people of languages, of cultures. Because of that learning and the people I met, I was given a confidence about New Zealand, which allowed me to stay in this country later in life. Though at one point, living in London in the 1980s, I was sorely tempted to stay on there and not return. I have never regretted that decision to return – to repay my father’s trust and also to pass on to my family the opportunities I was given in New Zealand.”

The professionalism of his teachers at Otago is what has stayed with him through his working life.

“Professor Zisserman essentially came to New Zealand as a refugee with nothing. He left Russia after the revolution and found himself in Vienna before coming to Dunedin to transfer knowledge and learning to people.

“Again, it goes back to that learning in University to “dare to take a step”, to be prepared to try and do different things.

“Again, it goes back to that learning in University to “dare to take a step”, to be prepared to try and do different things.

“They went through things during wartime that are impossible for many of us to understand. We have a duty to pass on knowledge and do our level best to prevent such situations happening in the future.”

His first job as a Junior Lecturer at Victoria University of Wellington in the early to mid-seventies was organised by Professor Zisserman without his knowledge.

“Talk about absolutely transforming your future, I didn’t even know that it was something that I could do. So, they [lecturers], can help point you in a particular direction.”

One of reasons he left lecturing at Victoria to join the then Ministry of Foreign Affairs in 1976 was that at the time New Zealand’s international links were spreading rapidly, with the withdrawal of the UK from Asia.

Stuart was sent for a short-term assignment in Canberra, which was followed by a posting to Moscow from 1978 to 1980, which provided him with the impetus to concentrate on Russian/Soviet polices and strategies generally.

“Coming back to Otago, what I call the human element is crucial. Learning about people about cultures languages, religions, thinking why people did things, how they did things, the impact of new technology etc.”

After Moscow, he had a diplomatic assignment in London in the second half of the 1980s. He then helped manage New Zealand’s Antarctic and Southern Oceans Policy for around seven years in the 1990s before returning to Moscow as New Zealand Ambassador, after which he left the diplomatic service in 2006. 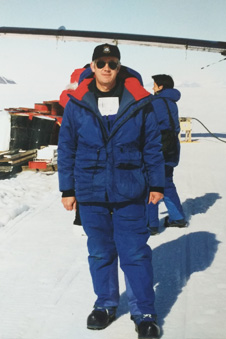 He worked actively to curb the illegal fishing that takes place in the Antarctic, and a cliff has been named after him: “Prior Cliff”, which is between 1000 and 1200m high and extends east-northeast from Mount Dick in the Churchill mountains in Antarctica.

“I like to take us back to the success of the Colombo Plan, that had produced so many leaders in Asia. I remember working very closely with the Malaysian authorities at one point during my Antarctic work and finding that five or six members of the Malaysian cabinet had studied at Otago.

“That was a connection that had its dividends because people knew who you were, where you came from. I think that those kinds of connections fostered today are a way to create relationships that build a sound foundation for work for the next 30-40 years.”

Recently, Stuart says he was thinking about what has stayed with him from his time at Otago. A quote from a lecture that he’s used both as a diplomat and a lecturer that came from a class about an ancient crusade has stuck with him: “‘The end of contemplation is action’, – I’ve used that very often. You have to do your homework, talk to people, you have to prepare things, but there’s a point where you have to use your professional knowledge to get things done.

“The art of diplomacy isn’t taught at university in New Zealand, but you can build on the basis of the foundation that you’re given in university to enquire, ask questions. Even if you don’t quite know that you’ve been given the foundation.”

He says where your learning takes you is sometimes is hard to foresee. His view is that the commercial expectations at university in more recent times are detrimental to more open-minded learning. 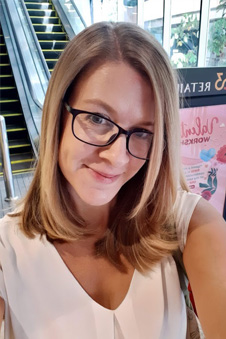 “Three generations of my family have gone to Otago, me, my sister Anne [a Law graduate], my father William J Prior later in life, and one of my daughters, Helen [Bachelor of Arts and Bachelor of Teaching, 2005], who met her future husband there and now works in Melbourne for a Dunedin based external education company.

“The opportunities offered by universities such as Otago give people the knowledge and contacts to work effectively in the developing global economy. It’s hard to believe that you could take advantage of our position in the world if you didn’t have the education and the contacts.”

Stuart lived in the family home in Dunedin during his studies in the late sixties.

“My daughter, however, had the joy of living in flats in winter in Dunedin. I got the inside on the flats, where the floor collapses and people huddle together to keep warm. She also studied arts and became a secondary teacher in Christchurch, followed by stints teaching in the Middle East, Hong Kong, and recently Malaysia.”

He says her Otago education, and the subsequent networking has been central to who she is and where she’s going.

Given his background in education and diplomacy Stuart is often consulted by various sectors and has recently been quizzed on his thoughts about the future of NZ’s universities.

“I think that re-energising the university sector is one of the keys to the future prosperity of New Zealand.” 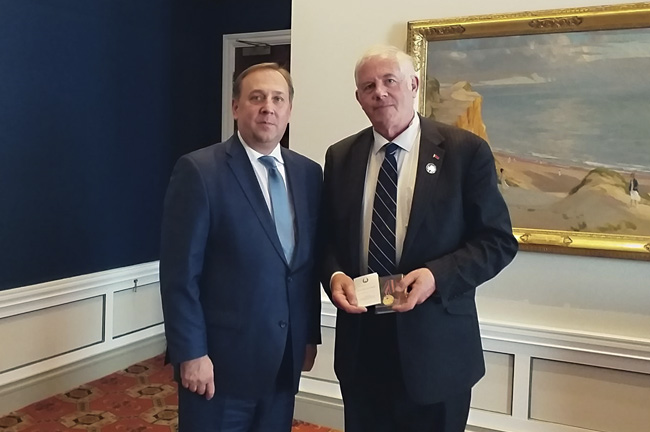 Presentation to Stuart from the Belarus Ambassador, His Excellency Dr Ruslan Esin, November 2019

Stuart lives in Wellington and is currently Honorary Consul for Belarus. He was approached when he was working in Moscow to help Belarus build business relationships with New Zealand.

“You never know quite where opportunities for working together will open up.” He says his most practical achievement with Belarus to date has been assistance, via counsel and networking, to invigorate its Antarctic science programme and build its own Antarctic base in East Antarctica.

“Today there are political issues in Belarus, as in many countries. However, given the current situation in Belarus. I think that given time there could be a positive outcome, there are plenty of things that give me hope.

“The people in Belarus are working out their own future and there are things that at some point New Zealand may be able to help out with, be they economic or other means.

“As I know from my long and detailed engagement with Russia, people really do matter and good things always take time. As I have seen at first hand New Zealanders and Russians have shown that they can get on very well together. In New Zealand the idea of shooting deer from a helicopter came from Russia and we’ve benefited in fishing from Russian knowledge, so it’s a two-way relationship.”

“There is nothing more corrosive to long-term relationships than corruption. You have to be prepared to walk away from things that look too good to be true, as they usually are. This comes back to my founding professors – there are so many things today that I think thank goodness that I had that grounding at Otago.”