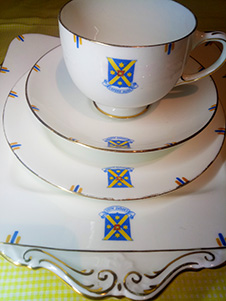 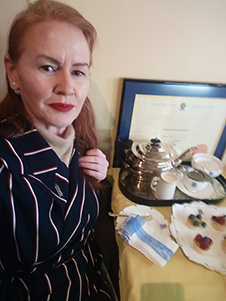 Along with members of the Highlanders rugby team, another special guest at last week’s alumni virtual afternoon tea was an official 1920s University of Otago tea set.

Complete with six cups, saucers, side plates and a cake plate, the proud owner of the set is vintage tea party afficionado and Otago alumna Christine Jamieson. Christine Zoomed in to the meeting with her table laid with the Paragon fine bone china tea set, which bears the University crest.

Alumni Engagement Manager Donnella Aitken-Ferguson came up with the idea of the virtual afternoon tea as a fun way to connect alumni and the Highlanders during lockdown.

“Despite being a little nervous about the prospect of hosting an online event, we were determined to continue to offer our alumni unique experiences,” says Donnella. So the alumni office hosted the virtual afternoon tea for alumni and their whānau, and were joined by Highlanders CEO Roger Clark, Coach Aaron Mauger, and Captain James Lentjes.

Donnella had asked guests to submit questions prior to the event, which she then passed on to the Highlanders. At the afternoon tea, which was attended by around 20 alumni and their families, Roger directed the questions to Aaron and James.

“Alumni appreciated and enjoyed the opportunity to connect directly with the Highlanders, and we loved receiving emails from our alumni afterwards thanking us - proving there was nothing to be nervous about after all.”

Christine says COVID-19 had interrupted her plans to host vintage tea parties in Wellington, so she was thrilled to be able to join in with the virtual event, and is keen to host an in-person alumni afternoon tea in the future.

A proud Otago graduate, she says one of the reasons she attended the University was because her older brothers and sisters “impressed upon me how much I would adore Dunedin's built environment, and the traditions around university life at Otago.

“They knew me so well. I loved going to African History lectures inside the Clocktower building. I was deeply conscious of the provenance of the building, and the palpable, residual, radioactive half-life of students who had gone before. At times, I was overwhelmed by gratitude to be in such a thoughtful environment, I had to pinch myself to refocus on the engaging lecture content.”

We’ll drink to that!