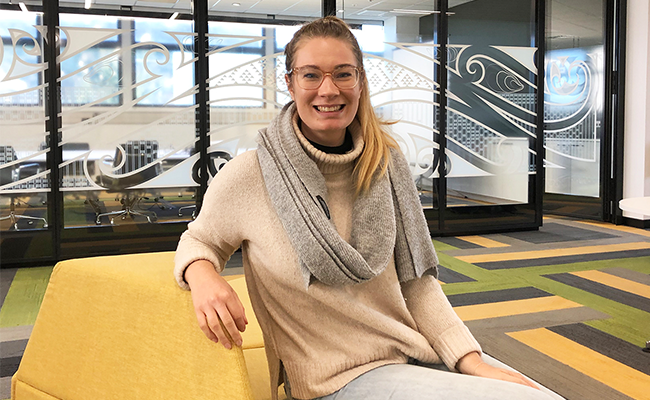 A love of food and cooking led Otago alumna Francesca Goodman-Smith on a journey to a career in food waste minimisation.

“My dad was an engineer, and later trained as a chef. The influence of science and food was a massive part of my life, especially growing up learning to cook with my dad. I thought I wanted to be a dietician, that’s why I came to Otago.

“But the more I learnt about the challenges that we faced globally in terms of food insecurity – how we are going to feed the world in 2050 with the growing global population, and how adequate protein is such an issue, I sort of zoomed out a little bit and was really interested in the whole food system.”

Francesca says she took one of Food Science Associate Professor Miranda Mirosa’s papers about food waste and “that’s really where all of the pieces of the puzzle clicked for me. I feel we’ve got this massive environmental issue of food waste and yet we’ve got hungry people, it’s a wicked problem that needs solving”.

While studying for her master’s, on the topic of food waste minimisation in supermarkets, she was grateful her supervisors connected her with opportunities for work experience.

“I valued that my project was linked to industry and I worked with real life businesses, because that actually led to me getting a job with them later. I think that’s something that Otago does really well, connecting research as much as possible with real life examples and working with businesses, which then creates opportunities for the students going forward.

“In the food space there is some really interesting activity here on the doorstep [in Dunedin]. We have KiwiHarvest which was one of the first food rescue organisations and Emersons who do a lot of innovation in the food space.”

She also valued the creative approach Nutrition and Food Science took to assignments, including visiting a landfill. “It was a really eye-opening experience, but it made it all sink in a lot more rather than just learning about it in the classroom.”

Francesca graduated with her MSc in Human Nutrition and Consumer Food Science in 2018 and gained a position as a Graduate Policy Advisor at the Ministry of Business and Innovation. Attached to the Science Policy Team, her work involved exploring where investments needed to be made to stimulate growth in the areas of scientific research which are important for New Zealand’s future.

“It was really interesting to be exposed to the workings of government and also how funding is distributed and particularly the way that research funding is managed.” But while she was working on interesting topics, it wasn’t about food waste – “my real passion area.”

So when a role came up at Foodstuffs New Zealand managing their waste minimisation programme she jumped at the chance. This led to her learning more about upcycled food and she became involved with a couple of companies which were starting to upcycle meat waste into petfood and bread into beer.

Upcycled food is the process of using food surplus, by-products and wasted components of food to create new food products, which can then enter back into the food system.

“I found that was super, super interesting, so I linked up with an association in the US called the Upcycled Food Association who had just grown hugely since they started in 2019. I was really fortunate to get on their committee [as a volunteer] to design a certification programme for upcycled foods. That opened a lot of doors in this new emerging sector.”

Francesca has also volunteered for KiwiHarvest and Kaibosh Food Rescue and is an international representative on the steering committee for Otago’s Food Waste Innovation Research Theme. She is also studying for her MBA from Griffith University.

“I think all of those things compliment what you’re doing in your day job.”

One of the doors that opened for her was being offered her current job with Fight Food Waste CRC (the FFW CRC), leading a research programme looking at upcycling opportunities and more broadly food waste transformation opportunities.

The FFW CRC is a national organisation, bringing together more than 60 industry participants, including state and local governments, academics and 11 different research providers from around Australia, to work on high priority projects to help solve national problems. It is funded by the Commonwealth and aims to halve food waste by 2030, in line with the UN Sustainable Development goal.

“It’s got all of the touchpoints that you need to make a systems change, rather than just individual incremental change. Often it’s really cost prohibitive for one company to invest in a whole bunch of infrastructure to do a certain thing, but if there’s the right model for everyone to come together and share the benefits of that and co-invest in something then you end up with a more sustainable business model.”

One example is a study the FFW CRC undertook looking at what potato growers could do with the potatoes that don’t make the supermarket grade. Five growers came together to work on the project and they figured out that to do something meaningful and economically viable they would need to work together.

Another project involved the juicing industry and opportunities for the leftover apple and pear fibrous material. They shortlisted nine different viable opportunities that they could turn the waste product into, from putting it into animal feeds to nutraceuticals, to food products in the supermarket.

“It was the same thing, in order to get that scale to meet the demands of whoever was going to buy that product they needed to bring it all together . . . That challenge is even more significant in New Zealand because the scale is even smaller.”

However, Francesca also says New Zealand has a lot of great examples of smaller start-up companies looking at these opportunities.

“One of my favourites is Citizen Collective, they produce a whole range of products now but their initial product was using stale bread to make craft beer. Because they are looking at the NZ market and the way they are positioning their product – they’re making their own product that they sell – they can match the supply and demand much more easily. Whereas if you’re selling to a food ingredients company like Unilever or Proctor and Gamble, they just need such significant tonnes.”

While there are social, environmental and financial benefits to food waste minimisation and upcycling, Francesca believes financial incentives are key to making change because a lot of businesses still make their decisions based on the financial drivers.

“I do think it comes back to where the financial incentives are and making sure that the most cost-effective thing is to not waste, or even that people are aware of the cost of wasting, whether it’s individuals or businesses.

“Making that whole case for minimising waste as a way to reduce costs or to save money is a story that I think we could tell much better.”

She says it’s also important organisations, government and business work on initiatives together, rather than reinventing the wheel and that it’s “great to see the University of Otago really driving a lot of collaboration with industry”.

“You can slice and dice food waste from so many different angles.”