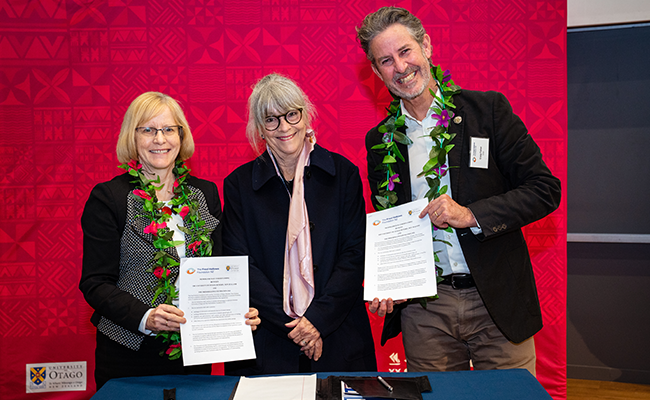 Celebrating 30 years of restoring sight, the Inaugural Fred Hollows’ Lecture has been held at the University of Otago.

Fred Hollows was an internationally-renowned eye surgeon and humanitarian who worked tirelessly to end avoidable blindness. In the Pacific, The Foundation works in partnership with local ministries and health authorities to screen for signs of disease and provide treatment, train eye health professionals and advocate for accessible eye care for all.

“I am honoured to be here at the Inaugural Fred Hollows’ Lecture, celebrating 30 Years of The Foundation. I am immensely proud of what The Foundation has achieved in those 30 Years, including restoring sight to over three million people globally. I have no doubt that Fred would be full of pride as well, were he here to celebrate with us today,” says Gabi Hollows. 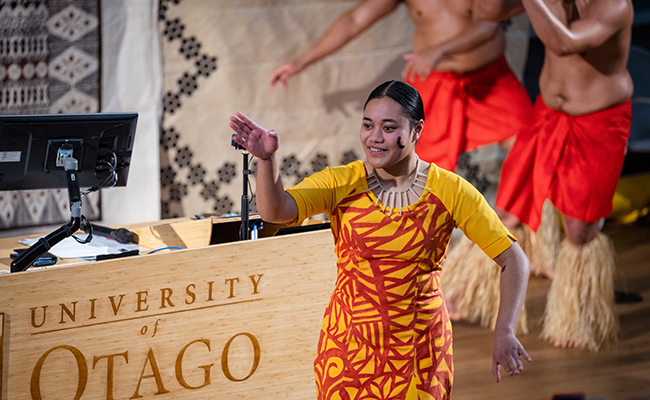 The evening included a performance by the Aumaga Dance Group.

After the lecture, a Memorandum of Understanding (MOU) was signed between The Foundation and the Division of Health Sciences, continuing their collaboration to improve eye care for the people of the Pacific. Through the MOU, the two institutions will seek to promote the exchange of information and materials, and the exchange of academic and administrative staff and students. 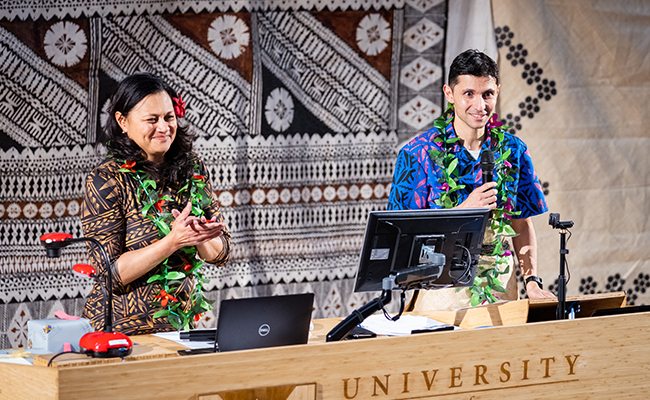 Dr Walker says the Lecture and the MOU will allow The Foundation and the University to continue to develop a sustainable, ongoing collaboration, aimed at improving the health of Pacific people.

“The Lecture is a regular visible connection for students and staff to recognise the work done by The Fred Hollows Foundation, and the MOU gives us a platform to continue working with medical students to further develop the workforce and provide future opportunities for research.” 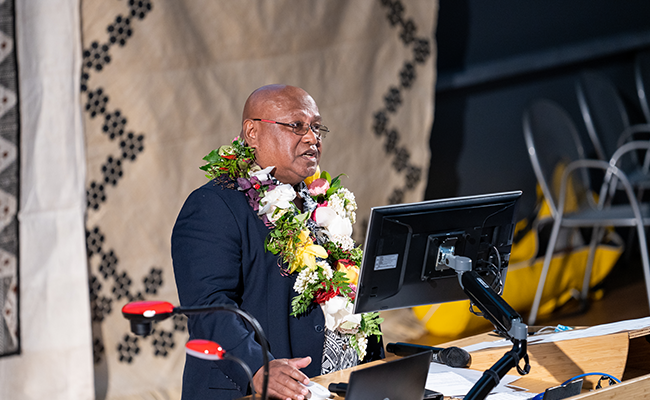 Dr Szetu spoke about his journey of caring for eyes in the Pacific and the causes of blindness such as cataracts, diabetes and lack of equitable access to eye care.

Dr Szetu says, “Having been with The Fred Hollows Foundation NZ since it began delivering programmes in the Pacific, I have had the privilege of seeing first-hand the organisation grow to where it is today – performing over one million eye care consultations and training over 320 eye care specialists throughout the Pacific, and ultimately significantly improving the quality of eye care in the region.

“With that in mind, it is an honour to be here today to participate in this Inaugural Fred Hollows lecture, celebrating 30 Years of restoring sight, and also to see the MOU signed between The Foundation and the Division of Health Sciences, which will help to see more Pacific people entering into eye care.”

In 2021, The Fred Hollows Foundation NZ performed 65,679 consultations and 3,428 surgeries throughout the Pacific. 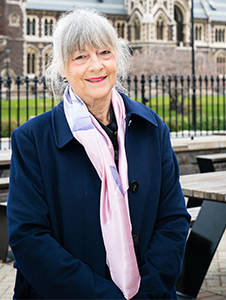 Gabi Hollows has been a driving force behind The Fred Hollows Foundation since she and Fred established it around their dinner table.

In her teens, Gabi worked every Saturday morning as a receptionist for a local GP and graduated as an orthoptist in 1972. Orthoptists specialise in disorders of eye movements and associated vision problems.

She first met Fred Hollows during her training. In 1976 she joined the National Trachoma and Eye Health Program (NTEHP), initiated and led by Fred and sponsored by the Royal Australian College of Ophthalmologists and the Australian Government.

Over three years, Gabi and Fred visited more than 465 remote Indigenous communities with a team of people, treating Indigenous Australians for trachoma and other painful eye conditions.
Gabi and Fred were married in 1980. Since Fred’s death on February 10, 1993, Gabi has continued to work tirelessly for The Foundation.

She has been recognised for her work through an Advance Australia Award for Community Service and a Paul Harris Fellowship from Rotary International. She has also been named one of Australia’s 100 Living National Treasures.

In 2003 she was awarded a Centenary Medal by the Australian Government and in 2012 she received an honorary doctorate from the University of Sydney in recognition of her tireless work in the field of blindness prevention.

Professor Fred Hollows graduated from the University of Otago in 1956. After graduating, he began assisting eye surgeons. He became so interested in eye surgery that he moved to the United Kingdom to specialise in ophthalmology.

While living in Dunedin, Fred was an active member of the New Zealand Alpine Club and climbed several peaks in the Mount Aspiring/Tititea region of Central Otago.

In 1951 Fred met New Zealand mountain climber and Everest pioneer Sir Edmund Hillary in a chance encounter. Sir Ed was on a test run for Everest, backpacking up the Tasman Glacier carrying a pack that weighed more than 32 kilograms.

Sir Edmund recalled the encounter in his memoir ‘View from the Summit’: “As I approached the foot of the gully running several hundred feet up to the hut I was met by a young man who came bounding down to meet me and offered to carry my load up to the hut. I handed my pack over and saw his legs buckle slightly at the knees. Although I didn’t know it at the time, he was Fred Hollows — obviously he started his helpful attitude early in life.”

The resulting friendship paved the way for Sir Ed’s support of Fred’s efforts to end avoidable blindness, particularly in Nepal, later becoming a patron of The Fred Hollows Foundation NZ. In 1965, Fred moved to Australia and became Associate Professor of Ophthalmology at the University of New South Wales.

In the early 70s Gabi was training as an orthoptist when she first met Fred. Not long after, they worked together on the National Trachoma and Eye Health Program and visited more than 465 Indigenous communities in outback Australia. The project sparked the start of their relationship and an enduring partnership to create change for Indigenous Australians and throughout the developing world.

Visiting these countries had a profound effect on Fred, prompting him to find a way to reduce the cost of eye care and treatment in developing countries. He recognised the necessity for local factories to produce affordable intraocular lenses for use in cataract surgery. He knew this would significantly cut the cost of restoring sight. Fred founded factories in Nepal and Eritrea, empowering local communities to make affordable and accessible lenses, far cheaper than if they were made in Australia. The factories have produced millions of lenses and are an enduring reminder of Fred's impact.

Undeterred by his cancer diagnosis, Fred was determined to keep working for change in the countries he cared deeply about. With only a few months to live he discharged himself from hospital to travel to Vietnam to train more than 300 Vietnamese eye specialists in modern surgery techniques.

Along with some friends, Fred and Gabi set up The Fred Hollows Foundation to guarantee his work would carry on.

Fred died on 10 February 1993 and was given a state funeral.