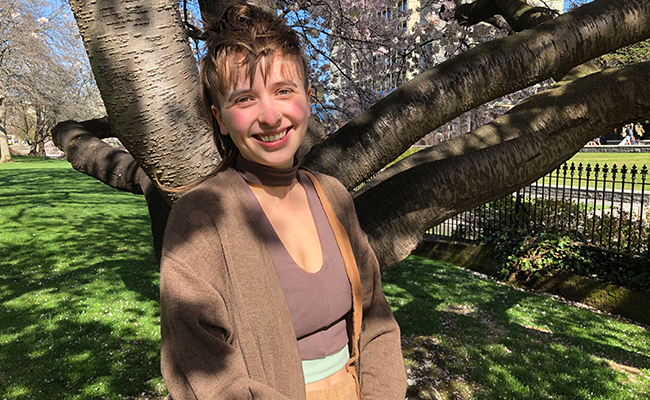 Keeping opera relevant in today’s world is one of the main goals of an Otago music student recently named one of the best in her field.

Bachelor of Music (Hons) student Knudson, a coloratura soprano, says winning the award was a sign that she was on the right track in pursuing postgraduate study in performance voice.

She plans on putting the $5000 prize money towards a masters degree in performance voice, professional coaching with teachers, as well doing a language programme in either Italian or German - two of the key languages of opera.

“Especially if I’m looking overseas, having these languages under my belt would be really helpful.”

In addition to performing classical opera, Knudson also writes and performs her own music which she describes as cinematic art pop.

“I’m sort of straddling two worlds, and I think they both inform each other.”

She records and then loops herself playing violin and singing and released her first album ‘My Body of Water’, last year. It’s available to listen to on Spotify and Bandcamp.

“So really, my ultimate goal is to do full opera with bass, or bass popera as a genre that can be associated with combining the power of all performance with the power of electronic music and modern technology.“

She believes opera struggles to remain relevant in today’s world, and she might be able to improve this through by taking a modern approach to her technical training.

“I feel like it's one of the most powerful forms of vocal production that I've ever experienced or heard.”

The style of singing enables her to access “the full instrument and the full potential of my voice”.

“There's just something so powerful about someone in a concert hall with no amplification being able to predict right to the back of the hall.”

When Knudson was born, her mum was a choir director, and as a result Knudson was exposed to a lot of “incredible music” from a very young age.

At age 16 she started receiving lessons from Isabel Cunningham who was a lecturer at the University at the time.

“She’s one of the best of the best, which was an awesome head start, to learn from her.”

Knudson won the Edmund Hilary Scholarship to study at Bachelor of Music through Waikato University and studied under Dame Malvina Major.

She transferred part way through to Otago University and is now doing her honours with Anna Leese.

Knudson hopes to do a post graduate diploma or course in either the United Kingdom or Europe, saying that studying somewhere where she could then work as a singer would be advantageous.

“I could build connections, and then from there, hopefully get more performance opportunities and be able to situate myself as having a professional career through singing.”

This year the awards, which were administered by the Dame Malvina Major Foundation’s Christchurch Committee, were extended beyond Canterbury to young artists around the South Island for the first time.