The competition’s judge, New Zealand writer and Otago staff member Craig Cliff, chose these two winners from nearly 40 alumni entries. The pair were delighted to be named alongside the other category winners: 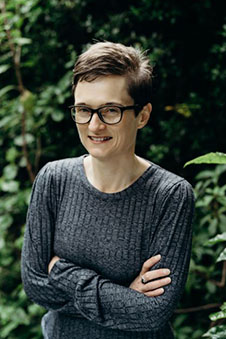 The winners each had very different interpretations of the competition’s theme “Brave New World”.

Styles, who graduated from Otago in 2010 with a BA Hons in English, and who holds postgraduate qualifications in creative writing from the International Institute of Modern Letters and Massey University, is currently an investigative writer at Consumer NZ.

She set her winning story “Stock Levels” in a supermarket.

“At work, I write about consumer issues, such as privacy and how data could potentially be used,” she says. “So, I’ve taken a flight of fancy, gone a bit Black Mirror, and thought of the worst-case scenario if there aren’t enough protections in place to ensure people’s right to data privacy.”

Cliff says her winning story has the key elements of a good story: “a mystery, a touch of humour, interesting characters. Immensely enjoyable and thought-provoking.” 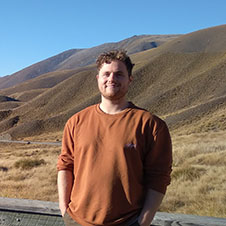 Graham, who graduated in 2016 with a degree in Physics and Mathematics, took a more personal approach with his winning poem “It Was Not The New World I Feared”, which was inspired by the arrival of his second son.

“Leading up to the birth I was prepared for a fraught and difficult time – I remembered too well how hard it was when we had our first child, Alistair. In many ways we were in a much more vulnerable place though. When Fenn did arrive we found ourselves, warm, dry, in a house we owned, equipped with the knowledge and reassurance from our first child. I was so relieved, and was grateful for the chance to find words for that relief.”

Cliff says the sentiment this poem expresses is likely common but not commonly articulated: the anxiety preceding the birth of a second child after a traumatic experience with the first.

“And then it turns to joy. I’m a sucker for a happy ending.”

Now an epidemiology analyst for ESR, Graham says he is also an enthusiastic poet.

“Competitions I have found are a good way of building the practice: the lure of sweet prizes, the deadline to get me moving on editing and refining a draft, and often a theme or constraint, which I thrive off in my written practice.

She says she has written creatively for years and writes at work.

“At work, writing is about helping people, communicating clearly, and trying to make positive change for consumers. While creatively, it’s generally a chance to reflect and understand the world around me.”

For her, the competition was a good way to renew her connection with Otago.

“When I was there (as a mature student), there weren’t as many creative writing courses in the English department, but I was itching to do more creative writing. Now, several years later, I see (via social media) all the cool writing initiatives that are happening at Otago, so I jumped at the chance to join in.”

“Reading the entries this year, I have been transported to different planets, asked to ponder the plight of refuges, native birds and captive octopuses, and been granted windows into depression and anxiety, romance and joy.

“It was a privilege to get a taste of what concerns and delights staff, students and alumni in 2022.

“Some of the winning entries stood out because they were so polished. Others might still have a few rough edges, but their raw energy and inventiveness was irresistible. But all entrants should feel proud for taking the time to think creatively and make something in the midst of their busy lives.”

The competition was established in 2019 as part of the University’s 150th celebrations and opened to alumni for the first time this year. It is organised by University Publications Editor Lisa Dick and English and Linguistics Programme Teaching Fellow Nicola Cummins and supported by University Book Shop, Otago University Press, Dunedin City of Literature, Otago Access Radio and the Otago Daily Times.

The full winning entries can be found here and will be recorded on Otago Access Radio.