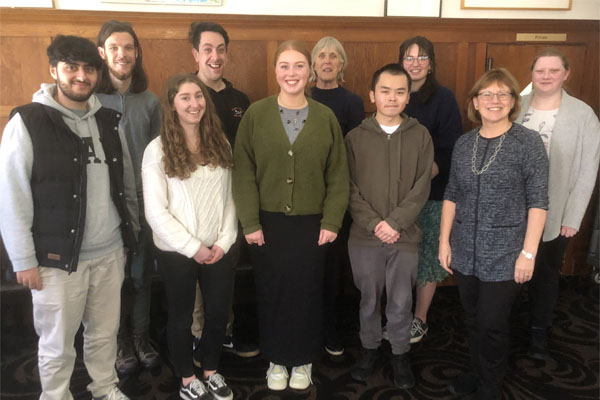 Over the last decade Ralph and Eve Seelye Charitable Trust scholarships have helped many Otago students achieve their dreams.

Mrs Haydon says that the Seelye Charitable Trust has always had a strong focus on education. “We are very privileged to manage a very significant legacy on behalf of Ralph and Eve. It’s important for us as trustees to keep their names and their histories alive.”

Eve Seelye came to New Zealand as a refugee (with her parents) from Austria. Her family escaped from the Holocaust, which claimed the rest of her family. Her father was a doctor and retrained and practiced in New Zealand. Eve followed her father into medicine and was a prominent anaesthetist, assisting with some of the pioneering heart surgery performed in Auckland. Ralph and Eve Seelye studied in Oxford University after Eve had been awarded a fellowship. Ralph completed a doctorate at Oxford.

At just 16, Eve was offered a place at the Otago Medical School, but her father encouraged her to start her tertiary studies with a BA at Auckland University. However, she followed her dreams and came to Otago where she graduated with a medical degree 1953. She went on to have a highly successful career as an anaesthetist.

Otago Development and Alumni Relations Director Shelagh Murray says she’s very pleased with the continued support the trust has provided to such a wide range of students.

“The investment by the trust to the University over the years since 2011 has been very significant and we are very appreciative of this support. And we’re pleased to say that the trustees have agreed to continue to support the fund for a further five years. So, we have got great support for existing students and those who are continuing with their studies.”

Second-year physiotherapy student Kelly Prangley says the scholarship has changed her life so much. She says she has had to fight for her education in the past and this scholarship has made her studies possible.

Third-year medical student Hayley Gibson says past encouragement from the trustees and the support of the scholarship have helped her to continue with her studies, whileComputer Science graduate Luke Tang says the scholarship has helped him concentrate on his studies while facing challenging times.

Geography master’s graduate Samuel Bergen says the scholarship took a huge weight off his shoulders and helped fund him to do field work outside Dunedin that he otherwise would not have been able to do.

Computer science and finance student Joseph Sholji says his family came to New Zealand as refugees from Iraq and he is very grateful to be able to study at Otago thanks to the support of his Seelye Trust scholarship.