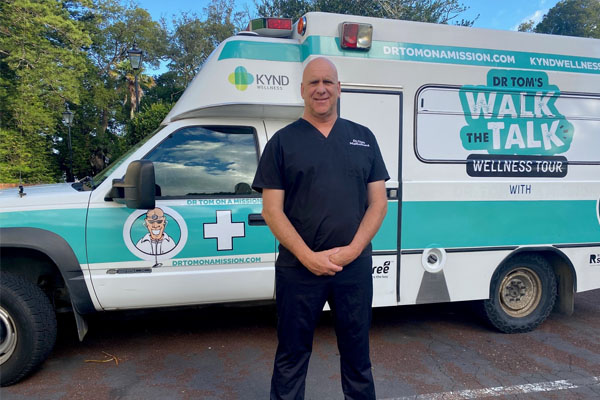 Since leaving the University of Otago in the late eighties Dr Tom Mulholland has had a remarkable career, as much as an entrepreneur, innovator and self-help book writer, as a health professional.

Growing up in the Hutt Valley, he was always fascinated by physiology (the scientific study of the way the bodies of plants and animals work) and often dreamed of being a doctor. However, he left school in 1979 to join the New Zealand Forest Service (NZFS), which was abolished and largely sold off after 1987. As an NZFS trainee, he worked in the bush for a year before completing his Bachelor of Forestry Science Intermediate at Victoria University of Wellington in 1981, the year of the Springbok tour. He says he balanced playing rugby and protesting, which was more than awkward and almost life-threatening at times.

After a year studying in Wellington, he moved to the University of Canterbury, where he completed a BSc and applied to study Medicine at Otago. “It was hard to get in (to medical school), I did a Botany degree and they said I would get in with two A’s and two B’s and I had two A’s and two B+’s but I didn’t get in, so I had to do an honours degree in molecular genetics and I got a first-class honours degree and they had to take me with that,” Tom says.

He was the first person from his family to go to university and says, “it was a real eye-opener coming from a working-class background and seeing that there was a whole other world out there.”

Once at Otago Tom spent his first two years in Dunedin and then moved to the University of Otago, Christchurch, where he did his clinical studies. His favourite professors at the University included Public Health Professor and former Vice-Chancellor Sir David Skegg, and from his clinical years in Christchurch, the late Professor Alan Clarke, with whom he formed a strong bond.

Having spent time at three of New Zealand’s major universities he says Otago was definitely the most enjoyable. “Otago was fantastic. It was very formative, I just loved it,” Tom says.

“I was probably a bit more relaxed coming into medical school after four years of study. They look after you they invest a lot in you so you get a lot of support.”
After completing his studies, he was a house surgeon at New Plymouth’s Taranaki Base Hospital in 1989. Seeing a gap in the market, in the early nineties he set up the first White Cross health centre in New Plymouth. He has since left the business, but it has grown into a network of 11 urgent care and general practice clinics in Whangarei, Auckland, Palmerston North and Christchurch.

In the late nineties, he saw the opportunities of the burgeoning internet and developed the online platform ‘Dr Global’. At one stage he had a team of 23 doctors working for him from Australia and New Zealand, including University of Otago Professor Campbell Murdoch.

“Some folks thought we were snake oil salespeople, but we were really 20 years ahead of our time.”

Tom says in the early 2000s then Health Minister Annette King asked him to investigate setting up a telehealth system in the Chatham Islands, but he says, “at the time the internet was sending about 7KB of information a second, so it took about a year to send an X-Ray to the mainland, so it just wasn’t viable.”

The Dr Global service was eventually sold to US company Kaiser Permanente, one of the world’s largest non-profit healthcare providers. They used it there to help manage their eight million patients and it was the first telehealth system in use in the world. 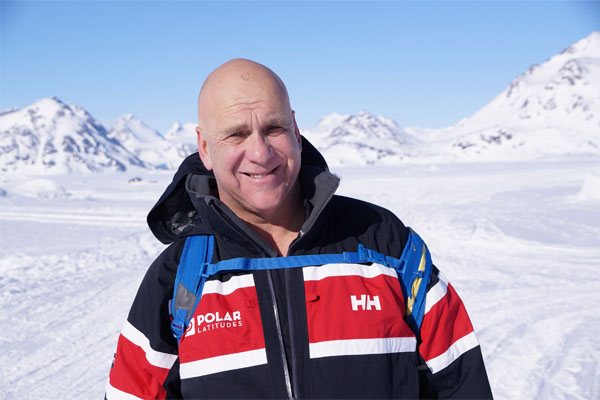 Tom has helped out in communities around the globe. He was awarded a NZ Defence Force Special Services medal for his work in the 2004 Boxing Day Tsunami, where he used his skills to help save lives. He says he can claim he’s done “120 Minutes” after featuring twice on the investigative journalism show
Facing mental health challenges, Tom decided to see what he could do to help others. He has written two books on Cognitive Behavioural Therapy, called Healthy Thinking, which is based on changing the way you think to change the way that you feel. He has been the director of the Healthy Thinking Institute since establishing it in 2005 and uses it to encourage healthy thinking.

“I went from being suicidal in my garage to doing stand-up comedy in six weeks, which I wouldn’t recommend as a therapeutic option.”

Always innovating, with his daughter Olivia as CEO, one of his latest ventures is computer application company (KYND wellness). KYND is a health app designed for employees and individuals to easily store and track their health and wellbeing data. The idea for KYND came after they travelled around the country in an old chevvy ambulance and noticed how many people were dying early and that health literacy was very low in Aotearoa New Zealand.

“I decided that I wanted to become the ambulance at the top of the cliff, not the bottom.”

Tom still practices emergency medicine, most recently working in Te Anau as a rural GP and worked in the emergency helicopter as well. He’s been an honorary lecturer in psychological medicine at the University of Auckland and has given 2,200 corporate presentations globally for business giants Microsoft and Google.

“Within 10 minutes of the first lockdown I was delivering all my content by Zoom.” And what does the good doctor say about Covid-19?

All Tom’s three children are university graduates, but none have managed to make it south to Otago. How does he cope with being on the road all the time?
“Someone said to me the other day I am high on novelty and low on stability, so it suits me. I love travelling, I chose rural GP and emergency medicine as a speciality as it allows me to work in the Chatham Islands, it allows me to work on a Russian icebreaker. Work out what you like doing.”

His latest book outlines his travels through the Russian Arctic Circle, which included getting up close and personal with polar bears.

“That’s one of the best things about a medical degree, it’s very eclectic. I’ve built my career around my lifestyle. I love travelling and I work on ships for a month a year. It’s been an awesome degree.”

Currently Tom lives on a 40-foot power cat, which is normally anchored in Auckland, but he is looking forward to spending several weeks over summer taking it out on the water to see some of the beautiful country.

More information on his books and online course