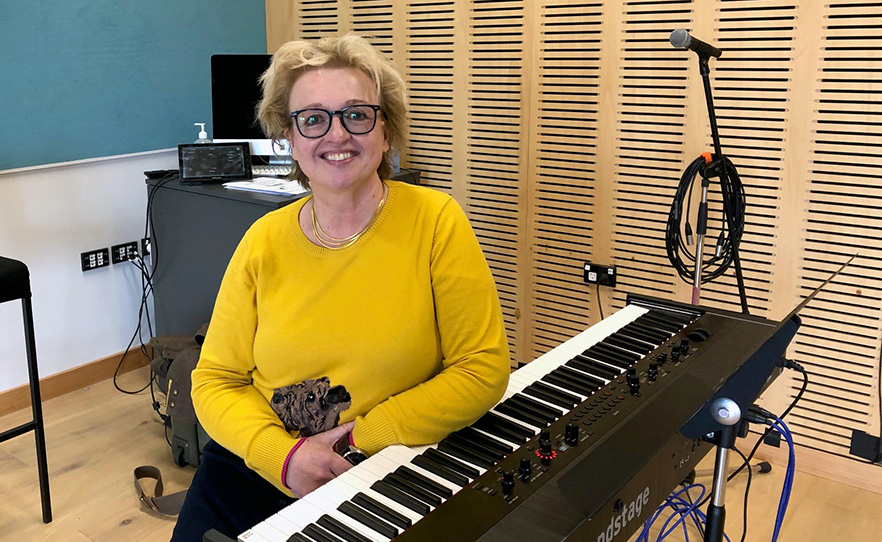 Cinderella, Britain’s Got Talent, TV drama Cilla, Doc Martin – chances are one of the actors or singers you’ve heard on film, TV or stage has been trained by Otago alumna and voice coach to the stars, Anne-Marie Speed.

Back in Dunedin in November for a week of voice training classes at Otago, Anne-Marie has been based in London for more than 30 years, working with some of the most famous voices in the industry.

Currently Director of her company The Voice Explained; Professor, Musical Theatre Course at the Royal Academy of Music; and an Estill Voice Training Mentor Teacher and Course Instructor, Anne-Marie says the seeds of her career began at home as a child in Dunedin and during her student days at Otago.

“My father was [broadcaster] George Speed and Dad was very involved in Radio New Zealand at that time here in Dunedin, so there was always an awareness of voice in our house.”

This continued at Otago, where she graduated with a BA majoring in French with minors in Russian and Drama.

“I spent most of my time doing drama. [Associate Professor] Lisa Warrington had built up the Drama department into what I would say was a department of international standing. I’m so grateful, so many of the things I learned from her and from that time I’ve taken into my professional life.”

She says the drama training and encouragement she received, and the opportunity to do so much performing while at Otago, set her up for her career. During her visit, she’s paid a nostalgia trip to Allen Hall, and is full of praise for the new Performing Arts facilities.

After graduating, Anne-Marie decided to move to London to train as an actress.

“When I went to the UK and went to drama school and gave them my CV, it was quite a few pages. They were ‘oh my goodness, it’s a booklet’, because in comparison to the other people [applying] I had had so much opportunity to perform and they had had much, much less. So just from that point of view, I was a little bit ahead in terms of experience. So I’m forever grateful for that, it was fantastic.”

However, after a while she came to the realisation that acting wasn’t really what she wanted to do. “Which was pretty shocking actually, having gone all that way.”

Her voice teacher at drama school had noticed her interest in voice and suggested she audition for the voice course at London’s Royal Central School of Speech and Drama. She was accepted, and from the first day found it fascinating.

Early on in her training, in 1992, she also met American singer and scientist Jo Estill, and went on to train in the Estill Voice system.

“I was just hooked. I couldn’t do any of it but I knew it was a good idea, so I was very fortunate to work with her personally for a few years … and that is the basis of all the technical work that I teach.”

Estill Voice Training is described as an evidence-based system that combines science with practise, identifying the structures that produce voice (in the larynx) along with those that create and shape sound (in the vocal tract) providing reliable, predictable control of voice production. Through a series of vocal exercises, students learn what voice feels like and not just what it sounds like.

“It’s not a technique, it’s a way of understanding voice production, and it’s applicable to speaking and singing in a range of different styles,” Anne-Marie says.

“It totally changes how you hear the voice and what we do with the voice, as a result of what we’ve done physically. What it does so beautifully is identify what’s happening and what this is doing to the sound, so it makes voice production predictable. And when you are a professional voice user, either an actor or singer, it needs to be predictable. So many people spend quite a lot of time training and invest a lot of time and money and effort and still don’t really know how the voice works.

“Just being able to produce voice on demand, so that voice production is not dependant on an emotional state – it can’t be I can only sing or use my voice depending on how I feel. That is by definition being professional.”

The Dunedin week-long course has attracted 20 singers and actors from around the country.

“You’ll hear all kinds of different sounds coming out of here – we’ve had people singing, a bit of musical theatre, some opera last night, we’ve had some pop and we’ve had speaking. You can apply it to as many different ways of using the voice as you want.”

As well as training voices for singing and speaking, accent training for film, TV and theatre is also a big part of her job.

“Accent work is a really big deal in musical theatre. You’ve got to be able to sing, certainly in London, in a range of different accents, to reflect different writing – obviously American, but there are many British accents as well.

“That’s quite fun. It takes quite a lot of work to break an accent down and identify the different elements then present that to the actor. It can be very challenging for them as well, depending on what the accent is, but it’s an absolutely vital skill for an actor.”

While some people can do mimicry, Anne-Marie says this is different to using an accent as an actor, as it doesn’t have the same flexibility of expression.

Some of her most high-profile work includes coaching Sheridan Smith for the 2014 Cilla television series about British singer Cilla Black.

“What we decided we had to do was identify those characteristic features of Cilla Black’s sound so that people would hear it and be reminded of her sound, but without doing a full-blown impression, and that’s really important, because you can’t act if you’re doing that.”

Currently she’s working with some performers who are part of a revival of the musical Guys and Dolls. Her past credits include voice, singing and dialect coach on dozens of West End shows and plays including Singin’ in the Rain, The Wizard of Oz, Charlie and the Chocolate Factory, Everybody’s Talking About Jamie, Hair, and Joseph and his Amazing Technicolour Dreamcoat.

She also trains actors and singers for auditions and has worked on both Britain’s Got Talent and The X Factor.

“It was very high pressure for the performers, it was the year that Little Mix won [X Factor, 2011]. They were great to work with but it’s very, very hard. It’s a very demanding situation … where you’ve got the live show on Saturday night, you’ve got the results show on Sunday and Monday morning first thing you’re back learning music for the next live show. It’s punishing, really punishing.”

Anne-Marie, who has also been President of the British Voice Association, says she enjoys how her work keeps her brain active and is intellectually stimulating, “but there’s also that interaction with people which I very much enjoy, and although my performing days are certainly behind me, I love that association and particularly being in a theatre environment. It’s just a wonderful world to be a part of and with interesting people, interesting material and the opportunity to work with some very creative people, very talented people.

“That’s the professional side of it and the training side of it is really helping people realise the full potential of their voices. Problem solving, giving people back their voices is a hugely valuable and important thing.”

During the pandemic, she moved her work online, and says it has changed how she works and how auditions are now seen.

“Certainly, in musical theatre all the first-round auditions are now on Zoom. What that means is they can see more people, so in a way it’s more democratic.”

She also does most of her Estill Teacher training online, rather than having students travel to her from all around Europe. Two of the teaching assistants at the Dunedin course are from Hamilton and are training with her remotely.

This is the first time Anne-Marie has been back in Dunedin for 10 years, as her family now live in Auckland.