Success is always about joining the kaupapa and working together 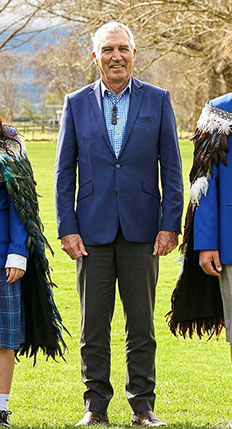 While acknowledging how special it is to have been made a Member of the New Zealand Order of Merit (MNZM) in the New Year Honours, Kaikōura High School principal John Tait (Ngāti Apa ki te Rā Tō, Ngāti Kuia) says in reality there are a huge number of people who have been instrumental in the development of his career, enabling him to do things “I would never have done just by myself”.

“There is a Māori proverb, Ehara taku toa i te toa takitahi, engari he toa takitini, which means my success is not mine alone, it is as a result of a lot of people. And I think that’s the reality of success. Success is never achieved by people who work on their own . . . it’s always about mahi tahi, working together, always about people joining the kaupapa and working together to achieve it.”

John, who graduated from Otago with a BA in 1968 and MA(Hons) in 1969, majoring in History, received the MNZM for services to education and Māori. He says he studied history at Otago because he had always been fascinated by the history of Aotearoa, and his appetite for reading post-colonial Māori European history and more latterly pre-European settlement history began during his student days.

Starting out as a Social Science and latterly Te Reo Māori teacher, John has been an educator for several decades, with a focus on improving outcomes for Māori students.

While Principal at Motueka High School from 1989-2001, the school gained a national reputation for introducing initiatives which resulted in greater educational success for Māori students. John became the Principal of Kaikōura High School in 2015, working to rebuild ties between students, staff and management after several years of struggles.

From 2001-2005 he was Regional Manager for the Ministry of Education, working with iwi education partnerships across the Central North Island. He also served as Chief Executive of Te Tapuae o Rehua, a partnership between Te Runanga o Ngāi Tahu and five of the largest tertiary institutions in the South Island to improve retention of Māori students in tertiary learning.

Between 2010 and 2015, John was one of two South Island facilitators for He Kākano and Kia Eke Panuku, evidence-based, cultural-responsiveness change programmes for schools that build on Te Kotahitanga programme. John is also past president of the Secondary Principals’ Association of New Zealand and spent time working in educational reform programmes in Qatar and Abu Dhabi.

He says he has been fortunate enough to have been involved in education across a range of settings. “It puts you in a wiser place, or a more thoughtful place, in a lot of ways. It also gives you a wide range of opportunities to do things. When I was at Motueka High School there was a focus there on our Māori students and how they were doing. I had some wonderful allies with me in the school, people who were on the kaupapa, which was awesome. And it is just the same at Kaikōura High School.”

When he worked in the Middle East, he observed Bedouin children, who came from nomadic families. “And the discourse about why those children weren’t successful in education was identical to the discourse that you hear in New Zealand about Māori kids, about why they don’t succeed, about family dysfunction and people not caring about education, a whole lot of negative discourse, and that made me reflect on what I might do when I got back to New Zealand.”

On return, he worked with Te Tapuae o Rehua and then at Waikato University, facilitating professional development with school leadership teams on how teachers could change their pedagogy so that Māori students would succeed.

“In many ways it was the realisation of the kinds of things that really make a difference for Māori students in the secondary sector that drew me back into being a principal again. What happens to students in secondary school really sets out for them what the future is going to be.”

He also learned through his work at the Ministry that connection with iwi is a vital part of the picture around educational aspiration, with many iwi settlements focussing a lot of resources on education.

“I’ve been around at a time of great development that’s not in any way been driven by me. I’ve just been part of it and been able to be at the coalface in a number of contexts within it.”

Today, John says he senses a “growing pride in New Zealanders’ unique identity having a Māori flavour to it, and people are getting used to that and understanding that biculturalism is at the essence of who we are. . . It is a unique identity that I think more and more New Zealanders are embracing. So that’s been a huge change in my lifetime, and I’ve just been riding along with that and pushing it wherever I can.

“Why wouldn’t we as a country want Māori children to be succeeding in schools, so that they’re valued participants in our society first of all, but especially in the parts of our society that make a difference, such as the economy, such as education etc. I feel that I’ve benefitted from a broader social change in thinking around things Māori.”

His professional journey has also been instrumental to his own personal journey with his Māori whakapapa. “My career opened up not just an educational world but a wider part of the Māori world to me, which has been pretty special, and I feel really privileged.”