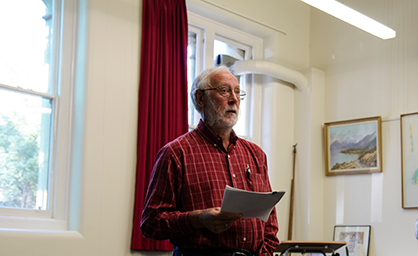 The generosity of US-based Otago alumni will both honour the memory of a renowned Geology Department graduate and staff member and help Geology students conduct more fieldwork in remote areas.

Otago School of Mines alumnus Dr Bill Lindqvist visited the Department of Geology last week to announce the NZ$20,000 Bob Carter Fieldwork Fund donation on behalf of the US-based Alumni of the University of Otago in America Inc (AUOA).

“The funding will be fantastically useful and will help postgraduate students conduct fieldwork in remote and geologically significant areas. It also will enable students to use helicopters to access fieldwork sites and bring back more sample material than they could if they were on foot,” Department of Geology Head Professor James White says.

Prior to Bill Lindqvist graduating from the Otago School of Mines in 1964, he met Bob Carter as an undergraduate in the Geology Department and was instantly struck by his academic ability and meticulous approach to laboratory and fieldwork. Mr Lindqvist became Bob’s brother-in-law two year later, and they "were close friends for 50 years."

Dr Carter gained his honours degree in Geology in 1963 and spent the following year as an assistant lecturer at Otago. During that year Dr Carter also married Anne Verngreen, an Otago Master of Arts graduate, and he became the first person to map the geology of Pitcairn Island and survey its water resources.

In early 1965, a Commonwealth Scholarship enabled him to travel to the UK and complete a PhD in Palaeontology at Cambridge before returning to Otago to take up a lecturing position in 1968. On their return journey – an adventure-filled overland car trek from Europe to Pakistan – the Carters collected many fossils to add to the Geology Department reference collection.

During his 13 year tenure at Otago Dr Carter, with fellow researchers and students, published papers on the stratigraphy and formational histories of the sedimentary basins in Southland, Canterbury and Wanganui, and similar regions along coastal California. He also embarked on several cruises to study sedimentary basins on New Zealand’s continental shelf.

In 1981, the Carter family moved to Townsville, where Dr Carter took up the Geology Chair at James Cook University. He held that position until retiring from full-time teaching in 1998. 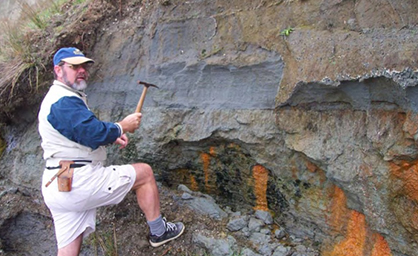 At JCU Dr Carter broadened the Geology Department’s focus beyond economic geology to include several other areas of research and teaching, and developed a marine science unit that became known throughout the world for its excellence.

During his career he published 137 peer reviewed papers and two books, lectured on every continent, including Antarctica, participated in 15 off-shore science cruises, presented at numerous international conferences, and supervised and mentored many students.

In the latter part of his career Dr Carter became involved in climate change studies through geological time and, although his conclusions led to controversy in some quarters, his contributions were always characterised by his recourse to science and high standards of academic conduct, Dr Lindqvist says.

“In fact his profound knowledge of climate history combined with his impeccable reputation as a scientist were such that he was called upon to advise parliamentarians in NZ, Australia and the UK and also senators in the U.S. Congress.”

Dr Carter received many honours and awards including the New Zealand Geological Society’s Outstanding Research Career Award, Honorary Fellowship of the Royal Society of New Zealand and the Lifetime Achievement in Climate Science Award from the Heartland Institute, USA.

Dr Lindqvist summed up Bob Carter as a “brilliant scientist, geologist, teacher, speaker and mentor who never lost his love for fieldwork”.

Bob Carter died suddenly in Townsville on 19 January, 2016 and his premature passing was a great loss for his family, and to science, Mr Lindqvist says. 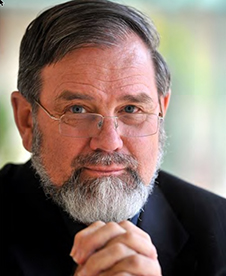 A 60-page tribute to Bob’s work and career and featuring many humorous anecdotes from his colleagues, was published as a supplement to the Geoscience Society of New Zealand’s Newsletter in July this year.

Dr Lindqvist recalled fond memories of his time at Otago reminiscing about the social life that surrounded his flat on the corner of St David and Great King Streets.

After graduating he and his wife Helen, a botany and zoology graduate also from Otago, left New Zealand for Australia before travelling to the UK where Dr Lindqvist completed a PhD in Economic Geology at Imperial College, London.

His subsequent career, which spanned more than 40 years, involved gold and base metal exploration for three major mining companies on several continents.

“We have had a wonderful life and my job took me to 49 countries. One of the reasons I lasted so long in the mining industry was the fantastic geological grounding I received in this department [at Otago]. It’s something I’ll never forget and I’m happy to be in a position to give something back to this institution.”

Dr Lindqvist, who lives near San Francisco, was an early board member of AUOA that was established in the United States in 2002 by the University of Otago to enable Alumni in the US to donate funds to Otago in a tax efficient manner. As a member of the the AUOA Advisory Committee, Dr Lindqvist was instrumental in advising the Board on the Geology Department’s application for the Bob Carter Fieldwork Fund grant.

Since its inception, the AUOA has raised more than US$3million which has been used to support primarily multiple student scholarships and research projects across several faculties at Otago.