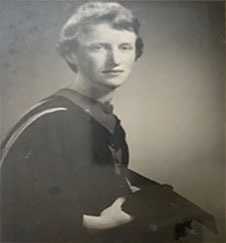 Elizabeth studied Classical Greek, Latin and French at Otago and graduated with a Master of Arts majoring in Classical Studies in 1959. Excelling at her studies, she received many prizes as a student, including the Atticus Prize for Classics, the James Clark Prize (for both Latin and Greek), and a Postgraduate Scholarship in Arts.

Awarded a prestigious Commonwealth Scholarship, Elizabeth headed to Newnham College, University of Cambridge, where she undertook further studies in Greek and Latin and graduated with a Master of Arts degree.

She then attended the University of Franche-Comté, Besancon, France to further her French studies, and travelled to the USA to attend the University of Michigan in Ann Arbor, to study under Professor Waldo Sweet, who was experimenting with new methods of teaching Latin.

At Ann Arbor, she worked as a Teaching Fellow in Latin and while there also gained an MA in Linguistics. As part of her studies, she enrolled in courses such as Old Irish, Hittite and Sanskrit.

In 1969 Elizabeth applied for a position at Monash University in Melbourne, where the Classics Department was looking to establish the teaching of Latin as a first-year course. She went on to spend her entire teaching career at Monash.

In retirement, Elizabeth continued to play the piano (having gained her LTCL while still at high school in Dunedin) and cello, and was an enthusiastic gardener specialising in roses and orchids. She passed away in March last year.

Her sister Josephine Vincent, also an Otago Classics graduate, says in Elizabeth’s Will, she specifically asked that a Bequest be given to the Classics Department, in order to encourage other students in their studies.

“She was always grateful for the encouragement she had received and remembered the staff with affection so wanted to repay that in some way,” says Josephine. A classical education clearly runs in the family, with Josephine’s children, Andrew and Genevieve, also Otago Classics graduates.

Josephine says Elizabeth was always interested in languages, archaeology and ancient history, and travelled the world, with many trips to Greece, the USA and other places with ancient monuments and ruins such as Turkey, Mexico and Malta.

In one clipping from the Monash Reporter in 1983, Elizabeth describes joining two archaeological expeditions in Greece – one organised by the British School of Archaeology and the other by the Australian Archaeological Institute. To understand how the heart of Mycenaean Greece (the Argolid) functioned, she felt the best way “to get the feel” of the subject was to retrace the steps of the early Greeks and explore on foot.

The report recounts: “at a fairly brisk walking pace, Miss Carvalho ‘clocked in’ distances between settlement sites of from three to six hours, sometimes over roads which, by the construction methods of walls, bridges and culverts, were identifiably Mycenaean”.

Classics at Otago Head of Programme Dr Gwynaeth McIntyre says it is proposed that Elizabeth’s gift, which will be administered by the Otago Foundation Trust, will be used to support student research which focuses on the societies and cultures of the Aegean Bronze Age, Elizabeth’s area of teaching and research.

“I am honoured to receive this Bequest from Elizabeth on behalf of the Classics programme. We are looking forward to using this gift to help inspire the next generation of students to explore the ancient world and its languages,” says Dr McIntyre.