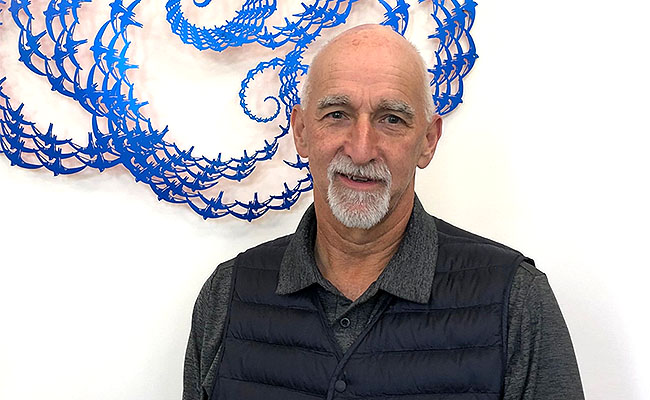 Connectivity has been a key concept throughout Grant Bowie’s successful 40-year career managing large multinational corporations. And it all started at Otago in the late 1970s.

Arriving at university in 1976, two things set Grant onto the path of his future success. Firstly, he says that because he was dyslexic, university teaching methods and learning systems worked for him. “I finally found a way to learn that suited the way my mind worked.”

Secondly, as a Commerce student who didn’t want to be an accountant, Grant had timed his degree perfectly.

“The Commerce department was going through a transition from effectively generating accountants, to creating opportunities to discover a much broader business context,” he says.

He says his lecturers, including Dr Hank Wolfe in Information Science, opened his eyes to all the other areas outside Accounting.

“Probably the greatest highlight for me was when the Information Science Department got the first mini-computer outside the Computer Centre. It was a digital PDP1134. We as a class – I was in third year then – actually managed the computer. For the first time we weren’t dependent on the Computer Centre, we weren’t constrained by the restrictions of the centralised mainframe computer facilities anymore, and so it showed me a pathway to my future.

“Everything I’ve now done in all my career has been derived – despite what discipline I might be focussed on – from this notion of ‘you’ve got to build better systems’; it’s about connectivity.

“So, my human resources approach is how you connect people; my marketing is how do I connect us to our people, our customers; my management theory is again how do you create force multipliers by taking teams of skilled people, which when connected can produce amazing outcomes and where the whole is great than the sum of the parts. This is the power of systems for me.”

There was one other major lesson he took away from his time at Otago. He’d come to university with aspirations of playing hockey for New Zealand, “but I wasn’t good enough”.

“That taught me that it’s more important to understand how to cope with losing than it is to be obsessed about winning.”

After graduating with a BCom majoring in Accounting and Information Science, Grant completed his professional exams and joined an accounting consultancy firm, despite not wanting to be an accountant – he knew that this was a great grounding and created great opportunities to travel and find his future.

He moved through a variety of roles in public accounting and consulting in New Zealand, the United States and Australia before joining the Hilton Hotels Corporation in Australia in 1987.

After holding a number of finance roles he moved into operations in 1992, and was appointed opening General Manager for the company’s casino in Brisbane in 1994. After 16 years and in the position of SVP Australia responsible for all Australian businesses, Grant moved to Macau in 2003, as opening President and General Manager for Wynn Resorts Macau. He then joined MGM in 2008 in a similar role.

In 2011, Grant was appointed as the CEO and Executive Director, MGM China Holdings Limited to list the company on the Hong Kong stock exchange. He was responsible for the overall management, strategic development and expansion of the company, which now employs more than 11,000 people.

He says he found the casino industry a “challenging and complex environment” to work in, and one which also carries some social risk.

“But I was of the opinion that this was something that would be really interesting, and commercial gaming to me is a positive thing because in the absence of commercial gaming you have illegal gaming and there is absolutely no capacity to have any sort of redeeming social good.”

During his career, he has served as Governor of the American Chamber of Commerce in Macau; Member to the Advisory Board of the Institute for the Study of Commercial Gaming at the University of Macau; Adjunct Professor, Tourism and Leisure Management at the University of Queensland; Chair of Queensland’s Responsible Gambling Advisory Committee and a member of the National Advisory Body on Gambling.

Having recently retired as CEO for MGM China Holdings, Grant remains an adviser to the company, and is still based in Macau, although he divides his time with Arrowtown when he can.

He has also offered to mentor students at the Otago Business School, as part of its Taumata group, which aims to help OBS shape the future in the Asia-Pacific through excellence in research and teaching, and in partnership with business and society.

“As I move into the next phase of my life I now selfishly want to reengage with the university, one because it gave me such a good grounding, two because I like to give back, but three because I want to keep my mind active.”

Also, as part of his philosophy of giving back, he is generously funding a Human Interaction Group Fund Doctoral Scholarship at Otago, worth $150,000, in the field of Artificial Intelligence.

“I know enough about systems to know that AI is still very, very clunky and as a result it’s still very imprecise and potentially negative.”

While fascinated and drawn to the power of science and technology, he is also aware of the problems that can be created by that power.

“I’m really obsessed about this notion of creating ethical frameworks that allow people to have informed consent.” He says for him the notion of informed consent was moulded through work he did with behavioural psychologists and scientists to develop responsible gambling initiatives.

“I think we want to get the best we possibly can out of technology and all the technology that is still to come, but we need to create frameworks to allow our people to judge what’s good and what’s bad . . . I love the technology, I think things that we’re creating are just amazing, but I also want it to be a positive experience.”

“My passion is hopefully to motivate, encourage, support, young people in the ways I was supported and encouraged, to discover this wonderful thing that is lifetime learning,” says Grant.

Director of Development and Alumni Relations Shelagh Murray says Otago is very grateful to Grant for his generous support both through the scholarship and by giving his time to mentor students.

“Grant’s support for important research into the ever-expanding field of Artificial Intelligence will help expand our understanding of the impact of new technologies, and by sharing his experiences and expertise as a mentor he will provide invaluable support and learning opportunities for our students,” says Ms Murray.

Pro-Vice-Chancellor Commerce, Professor Robin Gauld, says that the Otago Business School is proud of what Grant has gone on to achieve since graduating with his BCom.

“We are in awe of Grant’s multiple achievements and also grateful to have the opportunity to work with someone – one of ours – who has such depth of experience and insight. He is an important contributor to our Taumata advisory board, with a keen eye for strategy and tactics, while providing significant value to our staff and students. Grant’s support is hugely appreciated and we really look forward to continuing our journey together,” says Professor Gauld.