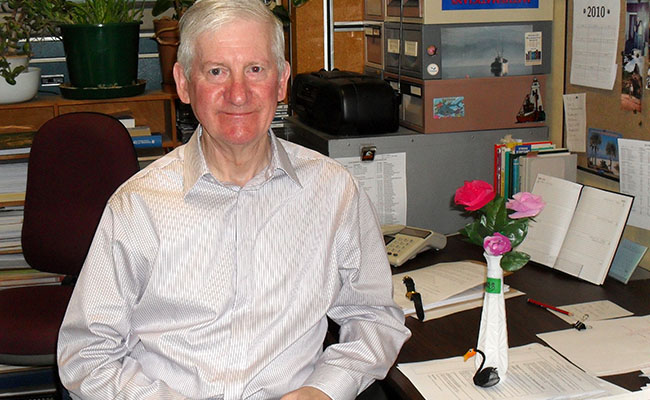 Associate Professor John Clark in his office in 2010.

A new mathematics prize has been created to honour the contribution and memory of Associate Professor John Clark, who taught at Otago from 1970 until his retirement in 2013.

The John Clark Memorial Prize has been established through a generous donation from Dr Austina Clark, in memory of her husband. Associate Professor Clark passed away in 2017.

The $500 prize will be awarded annually to the mathematics student who has the best honours research project, with a grade of A- or above. If no suitable candidate is found the award will be made to the best Postgraduate Diploma in Science or Master’s research project.

Dr Clark, who is also a lecturer in Otago’s Department of Mathematics and Statistics, says the idea of the prize is to remember Associate Professor Clark and the contributions he made to the University and the international mathematics community.

“I wanted to set up something to honour and remember him by, and to promote mathematics as well,” says Dr Clark.

She says he always enjoyed teaching, and during his career helped a lot of PhD and postdoctoral students, from as far afield as Portugal, Spain, Thailand, China and Japan. He lectured at all levels in algebra and allied topics. Associate Professor Clark also held the roles of interim Head of Department in the mid-1980s, Director of the Diploma for Graduates for several years and served on the Board of Undergraduate Studies.

“He was generous with his time, generous with his knowledge, and really willing to help,” says Dr Clark. An internationally respected mathematician, Associate Professor Clark was born in Scotland and studied mathematics at the University of Aberdeen. He spent two years at the University of Copenhagen while studying for his PhD. Straight after graduating with his doctorate, he took up a job in the Department of Mathematics at Otago.

During his career, he published three books and more than 30 papers, mainly in his specialist subject of ring theory, a branch of algebra. He spoke at numerous conferences, including one held in his honour in Turkey, to celebrate his 70th birthday. He was also an editor and reviewer for mathematical journals and collaborated on papers with mathematicians around the world.

After he died, Dr Clark received letters from the American Mathematical Society and University of Oxford, offering their sympathy and acknowledging Associate Professor Clark’s contributions to the mathematics community. The July 2018 edition of the International Electronic Journal of Algebra (IEJA) was dedicated to him.

The special IEJA journal edition begins with a tribute from his long-time colleague Professor Patrick Smith, from the University of Glasgow. Professor Smith says: “It is hard to pigeonhole John Clark’s work because his interests were so widespread. He had many collaborators and thoroughly enjoyed working with other people, not only engaging with them intellectually but also socially…

“Everyone speaks of John’s helpfulness. He was very widely read in the algebra literature and when asked a question he would invariably give a reference to a related paper that he felt could help. Usually it did! He was a conscientious reviewer and editor for mathematical journals and his colleagues in Otago remember him as an excellent teacher. He was very hospitable and he welcomed many colleagues from all over the world to the University of Otago and to his home… He was a most agreeable companion – gentle, modest, humorous, interesting – and always a pleasure to be with.”

The department hopes the first John Clark Memorial Prize will be awarded later this year.