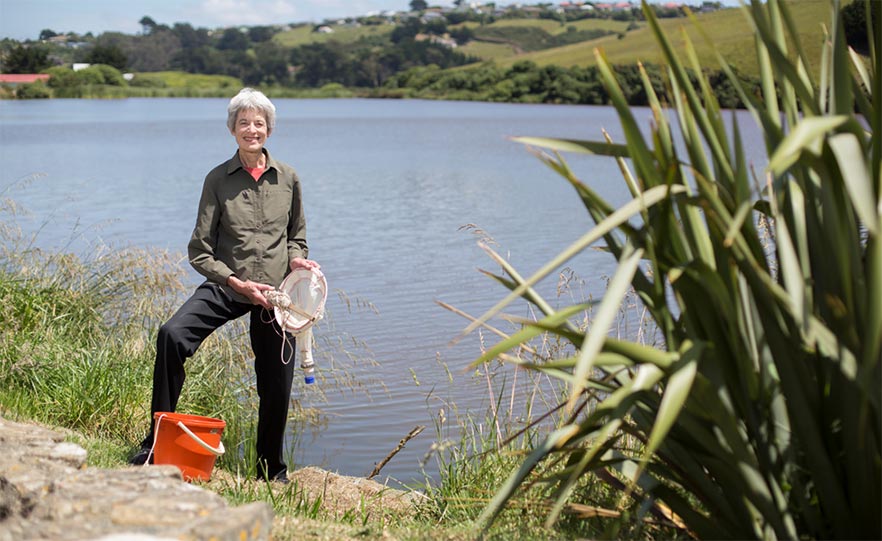 A new Professorial Chair in Freshwater Sciences at the University of Otago is being established with the support of a substantial gift from Emerita Professor Dame Carolyn Burns CBE.

Dame Carolyn has made an initial gift of $1 million to the Otago Foundation Trust and will make further annual gifts over the coming years to support the endowment for the Chair, which has been established in her name. At the same time, the University will actively begin fundraising to match Dame Carolyn’s gift, creating an endowment fund of approximately $5 million which will ensure the Chair can be funded in perpetuity.

Dame Carolyn is a leading international authority on the ecology of lakes and was made a Dame Companion of the New Zealand Order of Merit in the 2021 Queen’s Birthday Honours for services to ecological research.

She has a long association with the University of Otago, beginning in 1969 when she started work as a Lecturer in the Department of Zoology. She was Head of Department from 1998 to 2005, and continues to tutor fourth-year students, supervise PhD students and undertake research.

Dame Carolyn says the need to protect and manage our abundant freshwater ecosystems has never been more urgent, and this is behind her decision to support the establishment of the Chair in Freshwater Sciences.

“Our lakes, rivers and wetlands play a vital role in our economy, underpinning and sustaining agriculture and horticulture. They also play a central role in recreation and in our tourism industry, and of course in the health and welfare of New Zealanders by providing fresh water that is readily available for drinking,” she says.

“We have taken our freshwater systems for granted for too long. Now, with increasing population size, increasing land development and climate change, it is critical we acknowledge the value of our freshwater ecosystems with research-informed conservation and management strategies. We have to do that now; we can’t wait any longer.”

Dame Carolyn says the idea behind the new Chair is to provide and develop both research and leadership in the area of Freshwater Sciences, and by doing so help to maintain, enhance, and protect freshwater ecosystems into the future.

“The Chair has two aspects to it – research and teaching. You have a professor who inspires and leads students in research thereby building skills and knowledge, and who has a role also in teaching and in communications with the wider public – outreach programmes.

“By doing this you set in place a long-term infrastructure. It’s like that story: you can give a hungry man a fish to eat, or you can give him a fishing line and teach him how to fish.”

Dame Carolyn says former students frequently tell her there is a shortage of people trained in the freshwater sciences area, and regional and city councils need more trained staff to help them deal with their water quality and conservation problems. She says the number of new teachers and researchers in the area is also dwindling.

“The establishment of a Chair is timely,” she says. “I’ve spent a large part of my life working on Otago lakes, and Otago University has been my home for 50 years: where better to establish it?”

Acting Vice-Chancellor Professor Helen Nicholson says the University is extremely grateful to Dame Carolyn for her generous gift, and excited by the opportunity to create the new Dame Carolyn Burns Chair in Freshwater Sciences.

“It’s a wonderful gift from Dame Carolyn and a fantastic initiative for the University. It will honour and build on the trail-blazing contribution she has made to her field and will allow the University of Otago to continue to lead the way in recognising and enhancing the importance and value of our freshwater lakes and rivers.”

Dame Carolyn’s pioneering research on the ecology of zooplankton has underpinned much of the modern theory of lake biomanipulation, whereby lake food webs are managed to maintain water quality and lake health.

Head of the Department of Zoology, Professor Gerry Closs, says Dame Carolyn’s gift comes at a key moment in time for the management of freshwaters in New Zealand and will ensure Otago remains at the forefront of teaching and research in this area.

“Dame Carolyn’s legacy of scholarship and leadership at Otago is immense and has been of tremendous benefit to New Zealand and globally,” says Professor Closs. “Dame Carolyn’s wonderfully generous gift will create new and exciting opportunities to continue and extend that legacy into the future, addressing the many challenges that we face with respect to sustainable management of our freshwater ecosystems.”

During her distinguished career, Dame Carolyn served as Chair of the Nature Conservation Council from 1978-1983 and was a member of the National Parks and Reserves Authority until 1990.

She was a regional councillor of the World Conservation Union (IUCN) from 1984 to 1990 and chaired the New Zealand committee of IUCN members from 1986 to 1990. She was a member of the Board of Directors of the National Institute of Water and Atmospheric Research; the Board of Antarctica New Zealand; and the first female President of the International Limnological Society from 1995 to 2001.