Science Communication internship a chance to learn, and to give back 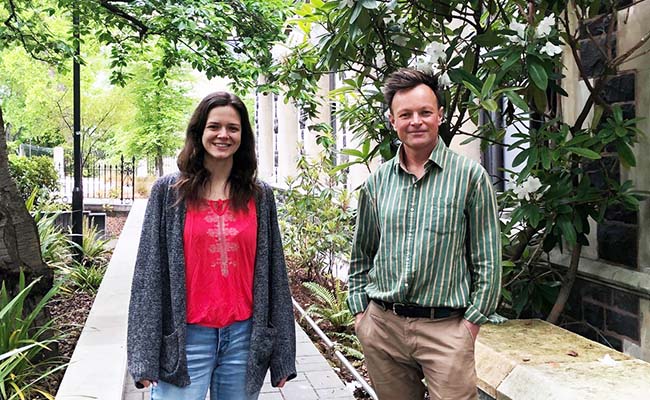 Sarcasm, insect displays, interaction with bats, marine heatwaves and keeping invertebrates happy are just a few of the diverse research projects Science Communication master’s student Alice Neilson has thrown a little light on during her internship this year.

“The next generation of science communicators is coming through and I’m in a position where I can impart my knowledge and experience to someone like Alice, but at the same time I know that Alice and her cohort have new ideas and ways of telling stories, so they can take my learnings and then go off and do their own thing.”

Showcasing six projects and the scientists behind the research, the videos will be shared over the coming weeks on the Division of Sciences Facebook page. The first one to be released features Computer Science PhD candidate Pradeesh, who is trying to work out how we detect sarcasm.

After her undergraduate Zoology degree, Alice decided to study Science Communication because it suited her broad range of interests and she didn’t want to get pigeon-holed. Likewise, she didn’t choose a specialty for her master’s because she wanted to explore a variety of science communication options.

“I don’t like honing in on just one thing. I like to go in lots of different directions at once. Science Communication is really good for that because you can research many, many sciences and do lots of different projects.”

She chose the internship with Guy because it gave her the opportunity to see if she enjoyed the content creation side of science communication.

“And [having done the internship] I definitely do I think that would be a really fun area to get into, especially as there’s so many options.”

She says the internship also opened up her eyes to the diversity of science projects going on at Otago.

“I liked the idea of going round the University and finding out the different projects that were going on and sharing that – because you don’t really get to see what happens at uni. I didn’t know you could study sarcasm.”

The COVID-19 lockdown made it difficult to film all the projects, but she managed to make a few videos before lockdown and has created the others with video clips people have sent to her.

“In terms of what I’ve learnt, I’ve learnt to trust my instincts with filming students and finding soundtracks to use. We had learnt a little bit in class but a lot of it was just figuring it out along the way.”

Alice has appreciated that Guy has “been quite good at letting me go off and figure things out and then been there for feedback”.

It’s the first time Guy has hosted an intern, and the idea came about after he gave a guest lecture on photography to the Science Communication class earlier this year.

“It was just fantastic that Alice put her hand up to do it. I think more than anything I feel like I have arrived at a stage in my own career that I want to give back.

“The next generation of science communicators is coming through and I’m in a position where I can impart my knowledge and experience to someone like Alice, but at the same time I know that Alice and her cohort have new ideas and ways of telling stories, so they can take my learnings and then go off and do their own thing.”

Having been a freelance writer and photographer for 10 years, Guy graduated with his MSciComm in 2016. Previously, he had completed a BCom in Accounting and a BSc(Hons) majoring in Physical Geography at Otago.

He says doing the master’s consolidated all his professional and technical skills with his academic studies and research interests.

“It wasn’t until the course had finished that what I learned in the master’s really started to make sense as I could start to put it all into practice in the Communications Adviser role.

“As Alice said, the real learning happens when skills are put into practice, but it’s good to have that background knowledge so you can come to a situation and go ‘oh OK I get it now, this is how it works’. But it’s all about putting your individual take on it too, and I believe it’s critical to develop your own voice in the work you produce.”

As well as helping lead to his current job, Guy says the master’s opened the opportunity for him to travel to Scott Base on Antarctica New Zealand’s community engagement programme at the end of his degree.

“My research and voice I bring to stories revolves around the intricate connections between people and place. It’s clear how people impact the environment, but I’m particularly interested in how the places of our lives impact us, and so the opportunity to explore this relationship between Antarctic research scientists and the place of Antarctica was fantastic.”

While the lockdown meant a lot of the internship mentoring had to be done remotely, and creating the videos wasn’t straightforward, he says Alice rose to the challenge and the situation had its own silver lining.

“Alice has had to just go with the circumstances and run with it and do what she can do within this constantly evolving and challenging environment. She totally rose to the occasion.

“These are good skills to develop as nothing’s guaranteed and you have to respond to whatever the situation presents. And that’s a lot of what communication is about. It’s thinking outside the square.”

Next year, for her second-year master’s project, Alice is planning to write and illustrate a children’s book on freshwater ecology.

“I have to brush up on my illustration skills. I haven’t done it in a few years, but I did art classes growing up and was always more into the cartoony illustrations rather than super realistic stuff. It will be quite fun to do but I’m going to practice over the summer.”