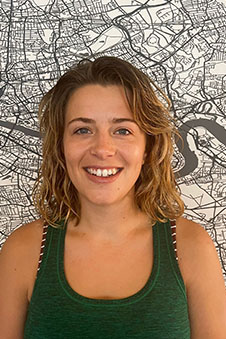 Hanna Van der Giessen, BSc(Hons), MHealSc: In recognition of bridging the gap between Artificial Intelligence (AI) and the medical world.

Since completing her master’s degree, Hanna has continued advancing heart health by landing a role at a startup company on the frontiers of cardiology and AI, HeartLab. Bridging the gap between the AI world and the medical world, Hanna is working with cardiologists, sonographers, engineers, and entrepreneurs to get their ground-breaking technology into hospitals, both at home in Aotearoa and eventually, the world. She is executing the company’s primary clinical trial in NZ, handling all ethical applications, research protocols, and is the first point of contact for the nationwide roll out of their technology to DHBs.

I was surprised but over the moon! I am so proud of the mahi I did throughout 2019 and 2020. In 2020 especially – the balance of being a postgraduate representative while completing my master's thesis was a real crunch. So to be acknowledged for where that work has taken me means a lot.

Following the completion of my master's thesis in the latter half of 2020, I decided to take a leap of faith and move to Auckland without a job. As much as I love Dunedin, I was ready to move to a bigger city and take on some new opportunities. I heard about HeartLab through a friend and reached out when the startup only had three staff. In early January I was hired and now, 11 months on, we have moved office twice, raised $3.5 million in capital, and have a staff count of 23 – it has been crazy.

I'm now a full-time Clinical Research Scientist at HeartLab, a fast-growing med-tech company using AI to streamline how clinicians report on cardiac function. What's even more awesome is that I am putting together a collaborative project between HeartLab and my master's supervisor! Full circle moment!

Since I was young, I was always keen on science – all types. It started with bugs in the garden during primary school, then marine life during intermediate, then eventually with human anatomy during high school. So it made complete sense to do First Year Health Science when I started at Otago. From there I was able to shape my degree as it progressed to establish what I found a passion in – working with people, in a health-based industry.

My Opa was in his fifties when he had his first heart attack, so I knew a fair bit about the heart from a young age. When he got a pacemaker put in and had several echocardiograms (scans of the heart) I was more exposed to that area of health science and it sparked my interest. With encouragement from family and friends of family working in the field, I decided to reach out to an expert working in the Medicine department and began a master's thesis looking at different ways to image the heart.

Those around me who are working in and leading areas of research inspire me, both inside and outside of the University, and the potential HeartLab has to be a cutting-edge company motivates me.

What were the highlights of your time at Otago?

I'm going to summarise this as an academic highlight and a culture highlight. The academic highlight was probably the moment I got my first taste of research in late 2017 when I was granted a summer research scholarship. It was a massive moment for me, my grades were never (what I presumed to be) 'scholarship worthy' in my earlier years. In 2017 I really put my head down and studied hard – and the feeling that I had when that paid off was so worth it. It led to an honours and then a master's degree! This pathway forward has 100 per cent gotten me to where I am today and will continue to influence me going forward with both my current job and future endeavours.

The cultural highlight will have to be the OUSA charity fight night I took part in in 2019. The challenge of a 12-week boot camp learning such an intense physical and mental skill will not be forgotten as part of my six years in Dunedin. Oh, and the signature Otago student body camaraderie!