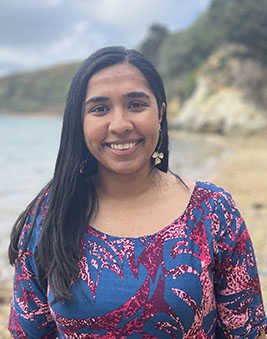 Namrata Chand, BAppSc: In recognition of leadership in improving climate resilience in communities.

After graduation, Namrata returned to Fiji, where she contributed towards the field of marine science and climate change. Her roles included working as a resilience officer under a UN-Habitat project, focusing on informal settlements that were the most vulnerable to the impacts of climate change. Namrata is now back at Otago, working on her PhD.

The award means a lot to me. It means being recognised for the roles, organisations and communities I was able to serve in and contribute to, due to my education pathway at the University of Otago. It also means being part of a community of alumni who are using their education to make a difference to their communities.

Since graduation, I went back home to Fiji for five years. My most recent role, which I was very fortunate to serve in, was working as a resilience officer for the Fiji Resilience Informal Settlement programme. This was led by UN-Habitat in conjunction with the local municipal council. Under this role, I worked with people in informal settlements in Fiji, who were the most vulnerable to the effects of climate change, with the aim to collect data and implement customised solutions to improve their resilience.

The other roles I served in during my time in Fiji included working for the University of the South Pacific, where I assisted in teaching various papers and units in the field of marine science and biology. I also worked as a fisheries intern for a non-governmental organisation called Wildlife Conservation Society and for the tourism industry as a marine biologist for Captain Cook Cruises. I was also a marine conservation scholar with Global Vision International, where I embraced the tropical waters and engaged in a lot of scientific diving.

Alongside my work, I also pursued my master’s degree in Environmental Science from the University of the South Pacific, where I focused on using remote sensing to map seagrass beds in Suva Lagoon, Fiji.

Now I am back at the University of Otago undertaking a PhD in the field of marine science focusing on seaweeds.

What were the highlights of your time at Otago, and has it helped you in your career?

One of the biggest highlights would include taking papers that took us out of the classroom and straight to the field, whether it be out at sea or engaging with people in communities. From the first year of my degree, I got to explore the Otago Harbour, and by third year we got to go down to Stewart Island.

During my final year of undergraduate study, my class went on a week-long research camp out to Karitane where we stayed at Puketeraki marae. I haven’t forgotten that experience and I am still in touch with the community members I met over that time. They really were a motivating point in my degree. This experience helped me realise my love for research and especially the kind that is tied to being able to serve communities directly.

Another experience that has also stuck with me was embracing white fluffy snowflakes falling from the sky during winter. Being a Pacific Islander, this was the first time I had seen snow, and it was pretty exciting.