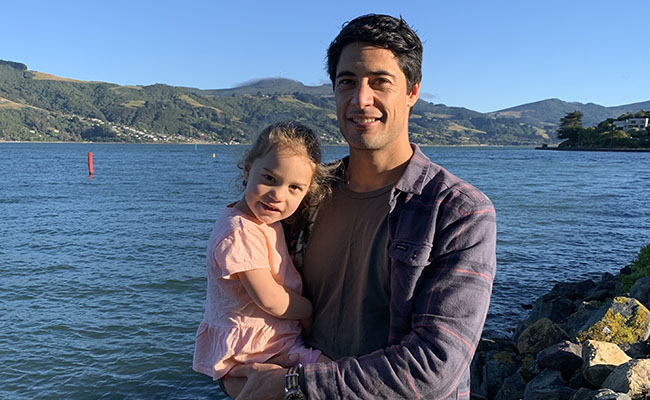 Alex Latu and his daughter Zephy

An Alumni Undergraduate Scholarship helped start an academic career at the University of Otago – a career which has gone around the globe and back again.

“It’s good to receive a scholarship, as things are always a little uncertain when you start at university. The scholarship freed me up to allow me to work out what I wanted to do the most.

“It helped start my academic career. I still remember the group of scholarship recipients getting together on the Clocktower lawn. It was a nice way to kick off our university careers together.”

Born in Invercargill, Alex lived in Tonga for two years and then Dunedin for five years, where he attended John McGlashan College. He was college co-dux in his final year and graduated (BA/LLB(Hons)) from the University in 2010.

His father is Tongan and met his mother when she was working for Volunteer Service Abroad there.

After finishing his studies at Otago, he worked as a judge’s clerk at the Court of Appeal and the Supreme Court in Wellington. He then gained his Master of Laws at New York University Law School, with the support of a Fulbright scholarship and a Hauser Global Scholarship.

“Once again the support of scholarships made my studies possible,” Alex says.

He has a three-year old daughter (Zephy Latu), who is in day-care at the University and says his wife, Senior Lecturer Dr Jemma Geoghegan, has been working heavily in the COVID-19 response that has kept many Otago staff busy.

“So, it’s nice that we’re all located here and get to see each other a lot more than we did in Sydney.”

Alex and Jemma were based in Sydney for six years from 2013 to 19, where he worked as a practicing lawyer specialising in media law and Jemma carried out research at the University of Sydney and Macquarie University.

“I am looking forward to pursuing more academic research in the media, as it’s a fast-moving topical area of law, so there’s always something interesting coming out of it,” Alex concluded.