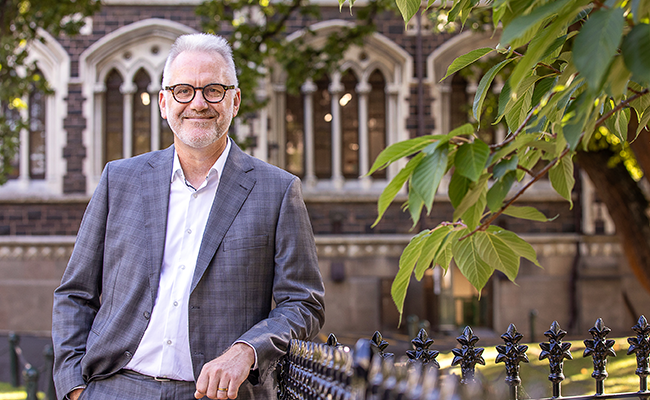 Professor David Murdoch’s first two weeks as the University of Otago’s Vice Chancellor have been very much in keeping with these uncertain days.

His tenure began shortly after the country’s move to COVID-19 Red Level which triggered significant changes to University operations.

“The big decision about the lectures going online was made on day two. I had a one-day honeymoon then straight into it.”

Meet-and-greets and ceremonial receptions have been replaced by Zoom calls and pandemic planning. Yesterday was no different with the postponement of both his welcome at Ōtākou Marae by mana whenua – “Personally, the pōwhiri on the marae was the most important to me. That was the one that was a little bit harder than others” - and a formal University welcome on the Dunedin campus.

“I’ve started at a very unusual time,” he says.

But it’s not a stretch to say that Professor Murdoch, previously Dean and Head of Campus at the University of Otago, Christchurch (UOC), is well-qualified to lead the University through this unusual time.

A recognised world-leader in the prevention and treatment of infectious diseases, he has been closely involved in this country’s pandemic response, including as a member of the Strategic COVID-19 Public Health Advisory Group.

What do you see as the university's immediate challenges?

“Obviously the main one is how we respond to the inevitable outbreak of Omicron with 20,000 students arriving. Student and staff welfare is key. Being able to look after people while we're managing the rules. How do we deal with people in isolation? How do we make sure that we've got support for our staff to carry out their duties? How can we support students, many are away from home for first time?

“We've been given a clear indication from Tertiary Education Commission that their preference is to deliver face to face as much as possible so we have to balance that with staff and student welfare and being able to manage potentially a lot of cases or potentially a lot of people who may be contacts.

“It’s important to instil a sense of leadership. Keeping things calm and keeping organised. We need to be flexible and need to be adaptable. I've been immensely impressed with the dedication and quality our staff. Although that doesn't surprise me because I’ve been with this institution for a long time.”

How does your Government advisory work fit with the Vice-Chancellor role?

“In Christchurch I was contributing to the national response and also having my own area to focus on as Dean. This is obviously much bigger and I have reduced some of those roles. But I have remained on some advisory groups and I think that’s what I should be doing if I have that expertise. It does help inform what we're doing because we've got a Vice-Chancellor who knows about the current crisis quite well.”

What is your sense of the mood of the university?

“There is anxiety, which is completely natural. But I do get the sense that we’re a team, which is critical. The University is a really complex beast so we need distributed leadership. There’s no other way of getting through. We are in as good shape as we could be. All tertiaries are in the same situation, just trying to work out what is ahead of us.”

What attracted you to the Vice-Chancellor role?

“I found myself in a leadership role quite early in my career when I became a head of department in my 30s. I learnt there’s a job satisfaction in leadership, a lot of fun being able to support people and help people to thrive. It’s such a privilege to lead such an organisation. There’s been quite a lead-in time since my announcement so it’s just good just to be here. And what a crazy time it is but I'm just happy to be here.”

How would you describe your leadership style?

“It's about building a team around you. Trust, respect and transparent communication seem fairly standard but they are critical. When we lose that leadership is not as effective. I believe in being able to trust people to do things and creating space for others to thrive. Diversity is one thing that’s not talked about as much. Having diversity in your teams means things work a lot better for all sorts of reasons.” 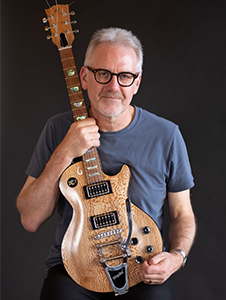 Do you have an overall vision of what you would like to achieve?

“There are some critical things for us. The immediate one is getting through this crisis. And it will end, we will be through the pandemic. Then it will be adjusting to what the world and universities will look like because we won’t be going back to exactly what was happening before. I think we will be more focused on some of the big global issues. I'd like us to have that as a University mission because our staff are doing so much in that space already with infectious disease, climate change and sustainability, and the role for universities is pretty clear there.

“The delivery of teaching and learning has changed. So, seeing where that goes and being part of that transition. Otago will still have a very strong residential component but we will need to look at how we deliver at distance learning because if we don't we're going to be left behind. And our relations with mana whenua is a really key one. That process has been started but we need to get that right.”

On a personal level, did you manage to have a summer break?

“We did. Of course, we moved during the summer break. So yes, we had a good break but we also were reminded that you can’t have a non- stressful move.”

Where can you be found in your spare time?

“I make guitars and ukuleles. That’s essential for me. I do it as my occupational therapy. I built my first one in 2003 and have just made my 23rd instrument. I make them better than I play them, and I give them away. They're all around the world.”