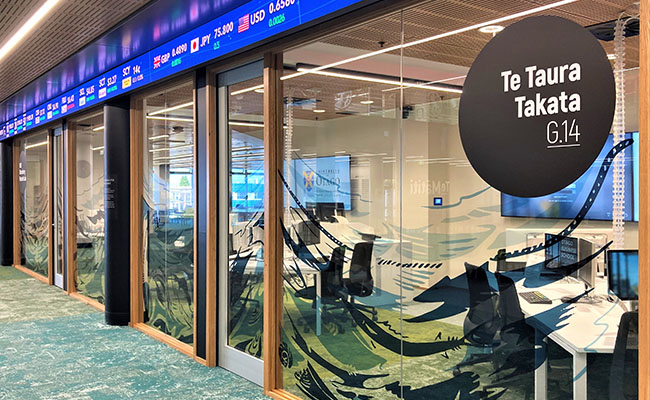 Situated on the ground floor of the Otago Business School (OBS), the state-of-art trading lab will provide students and faculty with access to real-time and historical financial data, news and analysis. It will be used extensively in Investment, Behavioural Finance, Corporate Finance and Banking courses.

It is one of the largest academic trading labs in New Zealand with 12 Bloomberg Professional terminals, giving students access to the same Bloomberg trading platform used by the world's leading investment companies, banks, corporations and government agencies.

Teaching in the Lab began over the summer and an official opening will be held at a future date.

Director of the Lab, Dr Muhammed Cheema, says the Lab’s materials will help students with their assignments, as well as their honours and master’s theses. “The use of the terminal is a major asset for students in the job market,” says Cheema.

Honouring the strong links the OBS site has to Dunedin’s trading history, the Lab is the first trading room in the country to include a cultural narrative in its design that reflects the historical importance of the site to both Māori and settlers.

“Before the extensive land reclamation around Otago Harbour Te Awa Moana Ōtākou, the setting of the Otago Business School would have overlooked the water,” says Jennie Henderson, Prospect Researcher in the Development and Alumni Relations Office.

“The harbour has always been rich in resources and underpinned significant economic activity where, in the early 1800s, local Kāi Tahu traded pigs, flax, potatoes and other resources with European sealers and whalers.”

The 1848 Scottish Free Church settlers also traded with Kāi Tahu nearby, to the south of the OBS, in the present-day Exchange area. This site was an important tauraka waka (landing place) and mahika kai (food gathering area) for local Kāi Tahu. It became a busy site of intercultural and economic exchange.

Later, as the location of the BNZ building and the Stock Exchange building, along with other banks and businesses, this area was the economic centre of early Dunedin.

Gifted the name Te Taura Takata (The Ties That Bind) by the University’s Office of Māori Development, the design elements of the trading lab space work to illustrate the past, present and future significance of the room.

“The design for this trading space speaks to a meeting of two fishing lines – one of iron and one of bone – across a dynamic whakapapa of moana, whenua, kaimoana and people,” says Kelly.

Originally intended as Dunedin’s post office, the grand Stock Exchange building in Princes Street instead became a museum and then in 1871 the first home of the University of Otago. When the University outgrew the premises in 1877, it was taken over by the Colonial Bank, which was subsequently taken over by BNZ in 1895.The building was then sold to a syndicate of Dunedin stockbrokers in 1899 and it became known as the Stock Exchange building.

In 1869, at the first University Council meeting, it was agreed BNZ would be the bank of the Council and, since then, the bank has contributed generously to the University through grants and scholarships.

“The sponsorship from BNZ and NZX and other donors is greatly appreciated and has made the establishment of this Lab a reality,” says Graeme Mullin, Development Manager at Otago Business School.

Among many Otago alumni in leadership roles at the two financial institutions, NZX Director Nigel Babbage can claim a special relationship with the new Lab. 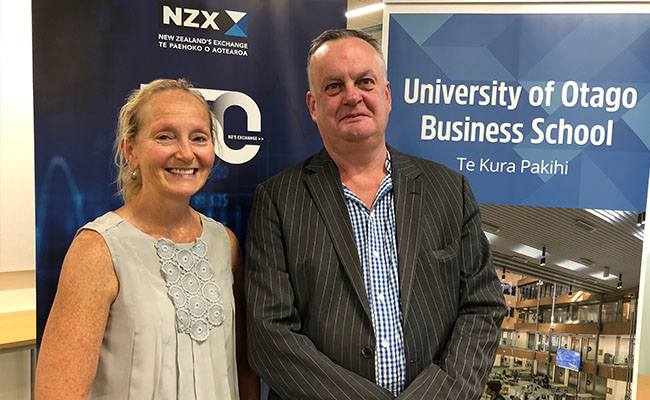 NZX Director Nigel Babbage with Associate Professor Helen Roberts, on a visit to the University in 2019.

As a Chemistry and Economics student in the 1980s, Nigel lived in a flat on Clyde Street that was situated right where the current Otago Business School now stands. He graduated with a BCom and BSc(Hons) in 1984.

Nigel says it was through studying Commerce at Otago that he was lucky enough to get a job with British Petroleum in Wellington as a foreign exchange trader, and was subsequently sent to Melbourne, London and Wall Street. “It’s because of that initial experience that I am now on the board of NZX,” he says.

During his career, he has worked in financial and capital markets locally and globally. He held executive roles with British Petroleum (now BP) and Citibank, managing the New York currency derivatives desk, and worked for BNP Paribas, where he took on the joint role of Global Head of Currency Derivatives Trading and Head of North American Foreign Exchange. He served on the Foreign Exchange Committee of the Federal Reserve Bank of New York for three years. Nigel was appointed a Director of NZX in December 2017.

He puts it all down to the start he got at Otago. “Education is really important. I would not be where I am today without having done a Commerce degree at Otago. NZX always tries to operate at a high level of integrity and honesty and these are values that I got through University.”

He says NZX and the University have a long, rich history. One enduring connection is the bell that was in the original University and later Stock Exchange building in Princes Street is now situated in the Geology courtyard, and is rung by PhD students when they hand in their theses.

Nigel says NZX is delighted to be involved with the new trading lab project.

‘It’s great that the students have the interconnectivity with markets now, that state-of-the-art technology is at the disposal of the next generation of graduates coming out of the Commerce department at Otago.” He says NZX is always on the lookout to hire graduates.

And his advice for current students? “All I would say is make good choices, always operate at the highest levels of honesty and integrity, and keep your powder dry!”
NZX Chair of Board of Directors, James Miller, also graduated from Otago, with a BCom majoring in Accounting and Finance.

BNZ’s General Manager of Māori Business, Rēnata Blair says the Bank of New Zealand and the University of Otago have enjoyed a long association, dating back to the establishment of both institutions in the 1860s.

“BNZ opened its first Dunedin branch in December 1861. It was one of the earliest branches of the bank and quickly became the biggest branch, partly due to the success of the Otago goldfields.

“BNZ is incredibly proud of the inclusion of the Māori motif and design that reflects the historical significance of the site. It reflects the sense of place in the trading centre and we commend the University of Otago for its integration of Māori design.

“Embracing the iwi narrative ensures the future leaders of our economy who use this lab will have an awareness of the rich history of Māori in its origins. It recognises the importance of Māori to the Ōtākou area and acknowledges the local Kāi Tahu iwi who continue to play a key role in the current and future social, cultural and economic life of the South Island,” says Blair.

Otago alumni in leadership roles at BNZ include Philippa Fourbet, current General Manager BNZ Markets and Charles Roberts, who held a number of senior positions at the bank.
Ultimately, the building of Te Taura Takata serves as both a homage to Dunedin history as well as being an effort towards bettering its future by actively investing in education.

“It’s powerful to see the relationships of the past leading to the development of this space in the present,” says Pro-Vice-Chancellor and OBS Dean, Professor Robin Gauld.

“The Otago Business School hopes that all who engage with the space, step away having learnt about the site’s historical importance, as well as having gained knowledge that can equip them for the future.

“We hope that the space serves to commemorate and celebrate the past, present and future of business in Dunedin.”

A donation given by BNZ in 1974 led to the redevelopment of the University’s Union St Bridge into a piazza. A plaque was put in place by the bridge to commemorate the redevelopment, and a time capsule was buried nearby.

In 2016, contractors working on the University landscaping project unearthed the unmarked time capsule during the removal of a raised planter near the Union Street bridge. Investigations eventually connected the capsule with the BNZ gift.

A glimpse inside the capsule revealed a brown manila envelope, which upon opening was found to hold the following contents:

It was decided to keep the fragile contents within the capsule and it now lives in a display case on one of the walls in the Bloomberg Lab..

Every trading room needs a bell to open the start of the trading day.

In keeping with the Lab’s intent of honouring Dunedin and the University’s heritage, a bell once housed in an alcove outside the Aquinas Chapel, and used to call brothers to prayer, has been loaned to the OBS by Aquinas for use as the trading bell.

Established by the Dominican Order in 1952, Aquinas was originally accommodation for male Catholic students. It was taken over by the University in 1988 and is now a co-ed residential college.