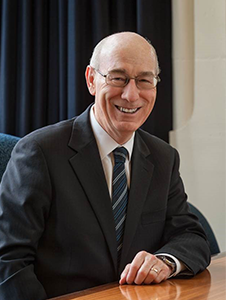 Dr Royden Somerville QC, a Dunedin-based barrister and the former Chancellor of the University of Otago, will be recognised for his contribution to the institution with the conferring of an Honorary Doctor of Laws.

The honour was announced ahead of the Saturday, 7 May graduation celebration.

He stresses that he “greatly admires and respects the dedication and expertise of Council members and members of the academic and professional staff”.

Dr Somerville is “very conscious of the high standing of the University as a public institution, nationally and internationally, and the significant influence it has through its world-class teaching, research, and community outreach programmes”.

He is looking forward to the graduation ceremony and congratulating the new graduates.  “The contribution of Otago students and graduates to society throughout their lives, engenders great hope for the future.”

He wishes the new Chancellor, Stephen Higgs, and members of the University community, all the very best for the future.

Chancellor Stephen Higgs says the honorary degree reflects the dedication and exemplary service Dr Somerville had given to the University during his tenure.

“Dr Somerville has contributed much to the University as a Council member and Chancellor. In these roles he has made a difference to the growth and development of the University, in particular through the 2019 sesquicentennial celebrations and, more recently, the many challenges arising from COVID-19.

“His dedication to the University and its interests has been unwavering and reflects the depth of his association with us, as a student, staff member and Councillor.”

Dr Somerville graduated from the University with an LLB in 1971, and an LLM in 1972, followed by a PhD in 2002. As a student, he represented the University in debating and mooting, and was President of the Otago University Debating Society and the New Zealand Universities’ Debating Council. He also served on the executive of the then Otago University Law Faculty Students’ Association.

Outside of the University, Dr Somerville is a Queen’s Counsel (appointed in 1998) specialising in public and environmental law. In 2016 he was presented with the Resource Management Law Association’s Judge R J Bollard Lifetime Commemorative Award, recognising his long and distinguished career in Law. He was Chairman of the Ministry for the Environment’s Environmental Legal Assistance Fund for 13 years. He also chaired the Board of Inquiry into the 2011 National Policy Statement for Renewable Electricity Generation.

His community service has included membership of the councils, boards, or executives of: Columba College, the Ngāi Tahu Community Law Centre, the Otago Foundation Trust Board, Government Property Services Limited, Presbyterian Support Otago (of which he is a life member), Presbyterian Support NZ, the Book of Order and Judicial Committee of the PCANZ, and the Presbyterian Property Trustees. He is currently President of the Dunedin Burns Club and the Otago Scottish Heritage Council and is a Past President of the Robert Burns Association of the Pacific Rim.

Dr Somerville’s honorary doctorate will be presented at the first of two graduation ceremonies on Saturday, 7 May. The first, at which Dr Somerville will deliver the graduation address, is an acknowledgement ceremony for graduates of the cancelled August and December 2021 graduations. A second ceremony will take place for graduates in Dentistry, Medicine, Pharmacy, Physiotherapy, and Radiation Therapy.