Otago alumna back home to develop her vision

After a year of travelling between Central Otago, London and Sydney, vineyard owner, investment banker and mother of two Philippa Fourbet is looking forward to a summer of gardening, cooking, and being at home.

“The boys want to go fishing every day,” says Philippa, just a few days after the family arrived back home at the Domaine Rewa vineyard, in the foothills of the Pisa Range in Central Otago. 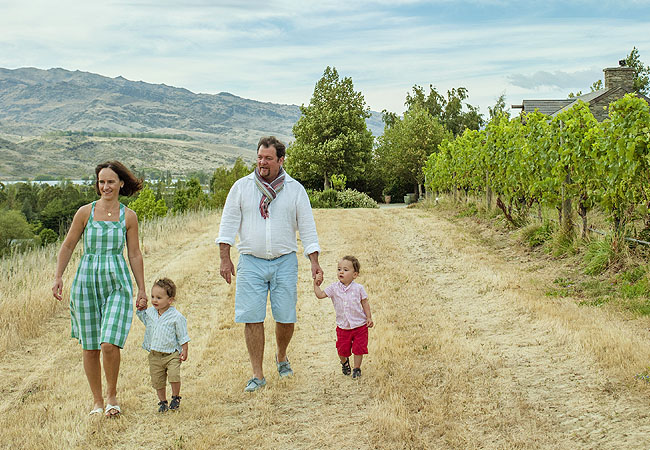 Philippa and Yannick Fourbet with their twin sons Augustin and Mortimer, at home on their vineyard in Central Otago. (Photo: Philippa Fourbet)

Her twin sons Augustin and Mortimer are about to turn three, and Philippa says the decision to put down roots at the vineyard was largely driven by family reasons. She also wanted to be more involved with the running of the vineyard and her husband Yannick was keen to get on with setting up his own horticultural pottery business.

After graduating with a BCom in Finance from Otago in 1997, Philippa worked in Wellington and London in investment banking, before deciding to buy the 5.5ha vineyard sight unseen in 2010, despite knowing “not that much” about growing grapes and producing wine.

“I wanted my own business, and to establish my own brand and market,” says Philippa, who grew up on a farm in Waitahuna, near Lawrence.

“I love food and wine, and this was near to home.”

In the intervening years, she met Yannick, an eminent potter from the south of France whose pots have been exhibited at the Chelsea Flower Show, and they lived together in France, administering Domaine Rewa at a distance and on holidays to New Zealand.

The name Domaine is a reflection of the family’s French connections and Rewa is for her grandmother.

Coming home means Philippa and Yannick, and in the future the boys, can become much more hands-on in learning their new trade and developing Philippa’s vision for running the vineyard in a sustainable manner, with a focus on organics and biodiversity.

When she bought it, the vineyard was already planted out in pinot noir, chardonnay, pinot gris and riesling.

Since then, it has grown from producing 3000 bottles in 2011 to 15,000 this year, and the wine is currently distributed in New Zealand and Australia, with smaller volumes going to Sweden.

With the support of viticulturists Grant Rolston and Gary Ford, and winemaker Pete Bartle, the vineyard has achieved biodynamic certification, which focuses on soil biology rather than chemistry.

To promote biodiversity on the property, Philippa also keeps bees and runs some Highland cattle.

Philippa says the big picture is to create a “multi-generational plan” for Domaine Rewa.

The move back to Central Otago also means Yannick can begin to establish his workshop and business making bespoke horticultural pots and amphorae – clay vessels historically used for the fermentation of wine, which will be used in the future at the vineyard.

Philippa will also continue her work in the financial sector, and after more than 10 years of employment elsewhere, has returned to her graduate employer, which will take her to Wellington one night a week.

But she has her eyes firmly set on the goal ahead for Domaine Rewa.

“We want to be a top producer of New Zealand wine. We’re not going to get there overnight, but we are working towards it.”