From Otago Zoology graduate to Australian Teacher of the Year 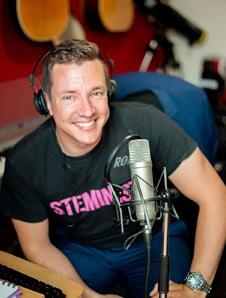 My main goal is never to have kids ask “when will I ever use this?”

On the Zoom interview direct from his Melbourne classroom, Kiwi Tony Vallance is alive with enthusiasm for his work and his students. He’s passionate about finding ways to connect them to their learning, and to their communities.

Earlier this year the Otago Zoology graduate was recognised for his commitment to his work and his innovative teaching methods when he was named Australian Teacher of the Year.

Up against 10 other finalists for the national award, 31 judges from universities and private and public schools gave Tony the top prize after viewing videos, photos, student work and feedback from his STEAMworks (science, technology, engineering and arts) learning space at Lilydale High School.

In his own words, Tony describes how it felt to win the prize, how he approaches teaching, and why he loves his job:

What was it like being a finalist and then winning the top award?

Most of the finalists had a Dr and a Grammar after their names and I was captain-how-ya- goin’ from Lilydale High School out east, so I had no chance in my mind, and went along with my wife Sian as a glorified date night, I’d never been to Sydney.

When they actually announced my name we were talking about taking the ferry the next day to Circular Quay. They said my name for a second time and the people at our table went “that’s you” and I looked up on the screen and there’s my mug. I went oh my god and walked like C3PO awkwardly through the tables to get to the stage.

They did a quick little interview which to me was the most beautiful thing. They said your submission and your evidence got you across the line because the judges all noticed you clearly connect to students and connect them to their learning. And I just teared up and was like you get me and what I’m trying to do in education. That was huge.

What does the award mean to you?

The moral of story for me is that it was super affirming to be for so many years the weirdo and doing the high fives and handshakes and hugs at the entry to classroom door, to having regular class meetings and being really connected with the kids as to who they really are as people. To have that validated on a national level was just unbelievable. Despite it all being evidence-based and despite the stuff I do being based in positive psychology methods it’s not the most orthodox, so it was super validating.

What about being a Kiwi and winning the Australian Teacher of Year Award?

It was awesome, now I know how the All Blacks feel when they win the Bledisloe Cup.

How did your students react?

They were stoked, it was so cool. In Australia, and in New Zealand, we’re quite ashamed of our successes at times, we don’t want to stick out, it’s the whole tall poppy thing. I didn’t feel that this time, it just felt comfortable, I felt validated and super proud and it was reflected back. The kids and staff have been amazing, it’s been a shared victory for state education!

How was your time at Otago?

I was in Selwyn for two years and definitely had a good time there. We had the most amazing warden – Philip Richardson and his wife were like surrogate mum and dad to all the kids, and I still catch up with him every few years. They were super influential and really lovely, they turned it round from being a little bit toxic-masculinity-fest to something that was hey guys we’re a team of young men and young women let’s go for it.

In my studies Prof Lloyd Davis was really influential, he worked closely with my sister – who is Nicola Toki the DOC Threatened Species Ambassador – and I did the same degree as she did because we had an outstanding biology teacher in our high school. You create that positive theme and away you go - you have a lovely relationship with these people who co-regulate you when you’re feeling down and absolutely support you. It’s understanding that that has allowed me to succeed in this kind of arena.

I just the loved whole size of the Otago campus, it’s a city unto itself, and it was a really multicultural eye-opening experience for me and that was just wonderful, I’ve got friends from all round the world now.

Why did you decide to become a teacher?

It certainly wasn’t on the cards when I graduated, I just wanted to escape any kind of real job. I was really into scuba diving at the time, my friends and I were part of the Otago University Dive Club, we operated out of the back shed at Clubs and Socs. I fell in love with diving and came over as a diving instructor to work on Great Barrier Reef.

It was a few years after that when I was telling my girlfriend, now my wife, gosh you know I really like this classroom stuff, I like helping people with overcoming something, if it’s a maths thing or if it’s something to do with the way they’re filling out a dive log. And she went have you thought about being a teacher and I went yes I have I would like to be a teacher when I’m 35 and she was like maybe you should look at that now. So I did and that was 11 years ago. I did my graduate diploma by correspondence when I was working part-time at the dive store and as a courier.

Where have you taught in Australia?

For the first six years I was teaching up at Queensland in a rural school and I’ve been down here [in Melbourne] for the last six years.

Kids that I taught up north were much more fiery, much more passionate and a lot more motivated in a lot of ways. I’ve noticed here in the city or certainly the outer eastern suburbs there’s a lot more apathy. But kids are kids, kids are people just like us, they want to be witnessed, they want to be acknowledged and supported.

What’s most important to you as a teacher?

Connecting to students and connecting them towards learning, not rote learning, not copying work from a text book or a PowerPoint. It’s up to us as teachers to be as creative as we possibly can be so we can take that student to where they’re at and put that square peg in that square hole and build their literacy around their strengths.

I do a lot of project-based learning and I also reach out a lot to the local community. We have a community opshop and volunteer facility and we did a business plan for them, designed and created prototypes to help them, such as new laser cut signage. All around this we had conversations about the poverty cycle and support systems in society.

My main goal is for kids not to ask “when am I ever going to use this?”

STEAMworks is essentially a student-run and often student-led facility. Ownership is key, from the moment the kids go in the door they get to choose – a high five, fist bump, handshake or respectful bow [of welcome], I just want to acknowledge them and say “hey welcome I’m glad you’re here”.

For example we’ve just done a Make a Difference project – a full week course. The start is all about our empathy, so we will often be tearing up about challenges in our lives, perhaps an issue with family verbal or physical violence, someone we know who has cancer, another physical or mental challenge, it might be an environmental thing we’re upset about. We write down what are the things that really suck and we really want to do something about and then we start in small teams to develop solutions.

Most are conceptual alpha-stage prototypes but we have had a few real world successes - one of my Year Nine girl’s tracking collar designs for Eastern Barred Bandicoots was accepted and is now being used in the field.

If you look at the psychology behind it you’re getting them to a point where they are facing some quite traumatic things and they are actually creating solutions – there’s a more empowered approach to something they feel helpless about.

Psychology plays a big part in your approach to teaching?

I’ve become a psychology nerd after the fact, I’ve taught Year 10 Psychology and Sian is a Clinical Play Therapist so all we do is geek out about this stuff.

Together we run a business called Building Better Brains Australia, all about empowering parents and educators. We’re working with several primary schools and are deeply passionate about changing traditional systems.

I’m also developing lot of graduate training programmes online for teachers and I’ve started a podcast for teachers called Edubabble to provide a platform for people to support each other.

How do you approach the use of technology?

I try and avoid technology for the sake of it and get as hands on as we can be, using Lego, sketching and drawing. I want to incorporate a lot of artistic elements for students to express ideas and challenge ideas before we go “let’s use Virtual Reality all day”, those sort of things are great and a useful educational tool but they’re never going to beat the power of two minds collaborating on something.

The aim is to enable kids to have different modalities to experience success. It’s that quote that’s attributed to Einstein: “if you try to teach a fish to climb a tree it will spend its whole life thinking it’s stupid”.

Play is the way. That’s how mammals learn and interact, it’s how our brains function. It’s often scorned in education but it’s absolutely fundamental and key and it’s also a nice non-threatening way to introduce challenging concepts.

What’s special about being a teacher?

Teaching I think is one of the most creative jobs you can have on the planet, no two lessons are the same, there’s no ground hog day and that’s one of the reasons I love it so much, and that coupled with the beautiful relationships you can grow with the kids and parents and being a part of the community, that sense of belonging is amazing.

Would you recommend teaching to others?