Q and A with Hugh Templeton 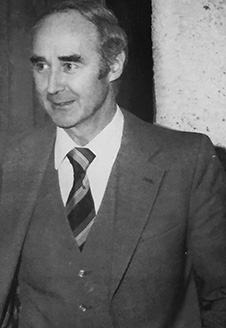 Firstly, can you give us a little background on your childhood and how you came to choose Otago University?

Our River Mataura, our Mountains Takitimu and Hokonui, the Templeton Twins were brought up in Southland schools and schoolhouses, and for four critical pre-war years in Tainui Dunedin, with a family automatically focussed on Otago University. Relatives and our elder brother Dr Malcolm Templeton had graduated from Otago – Malcolm with a Double First in 1944, to be capped at 80 with an earned Doctor of Literature from Otago for his six-volume lexion of foreign policy in New Zealand's Elizabethan Age. Capping concerts and processions were an annual spectacle, and Varsity A the team to back.

Why did you choose to study History?

My preference would have been like my elder brother – a double degree in History and English, with Geography – but was narrowed by timetabling to History. I was taught by world-class professors in W.P. Morrell and Angus Ross, who matched the then-grandees of the medical and dental schools Professor (later Sir John) Eccles and Dean Walsh. I also had an add-on in Economics II which was of value in diplomacy, administration and government.

What do you remember about your residential experience?

I had four years from 1948-52 of college life and leadership at the new Carrington Hall, the first mixed residential Hall. Activities, with Ian on Prism – the best residential hall magazine at the time – and on the Carrington Students’ Association, eventually as president, were as vital as any intellectual or cricketing pretensions in securing a Rhodes Scholarship in 1951.

Do you have any particular highlights of your time at Otago?

How did Otago shape your life and career?

Otago shaped me precisely as an Alma Mater, particularly through the teaching and advice of Professors Willie Morrell and Angus Ross. Their support was integral in securing, with a fellow Carringtonian, the brilliant medico Dr Graham Jeffries, one of the then-two 1952 Rhodes Scholarships. I was also influenced by Basil Dowling (the poet), and David Esplin. 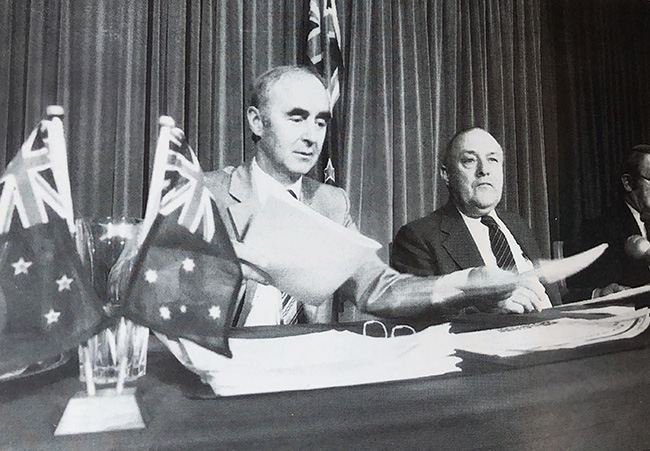 What do you regard as your significant career achievements or personal highlights? 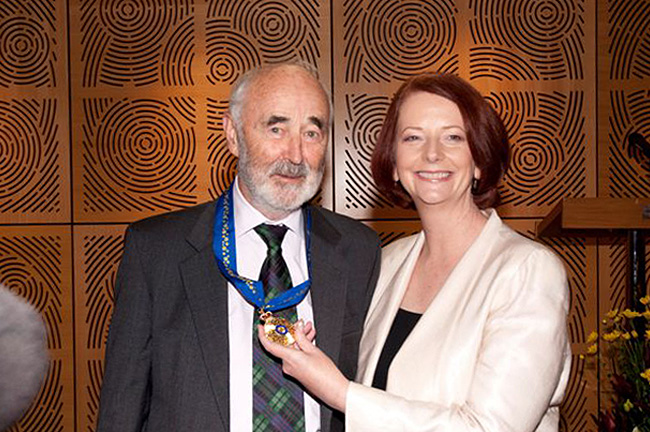 Australian Prime Minister Julia Gillard presenting Hugh with the Order of Australia for his lead role in negotiating the important 1983 ANZCER - SPARTECA agreement. Taken in February 2011 at the Australian High Commission.

What values are most important to you?

The Christian underwrite of the West, and the Church. The underwrite of our Parliamentary realm. Holding leaders to the truth, the nation to internal equity, and abroad to the principles of the UN Charter New Zealand helped draft – the chief principle being that of cooperation, the first word laid down in the Charter in "the search for peace and security, and economic and social progress".

What are some of your favourite ways of spending time?

With people – my wife and children, the family and Templeton Clan, neighbours and friends. Church and community, the well-being of our Parliamentary Realm and our globalising world. Thinking, talking, reading, writing....

What does it mean to you to be a twin?

It is a precious gift and distinction – Ian and I understood each other and still do – we never had to call at cricket.

What advice would you give students today?

29ers like the Templeton Twins were born little Brits to become in our country's Elizabethan Age, 1949-84, the first generation New Zealanders of an independent New Zealand (read our contemporary Maurice Shadbolt's The New Zealanders).
Young 21st century New Zealanders are born citizens of the world, and guardians of a fragile blue planet. Think and work globally – and pray a lot, as the UN Charter enjoins " for peace and security and social and economic progress" – as free but fair-minded New Zealanders.