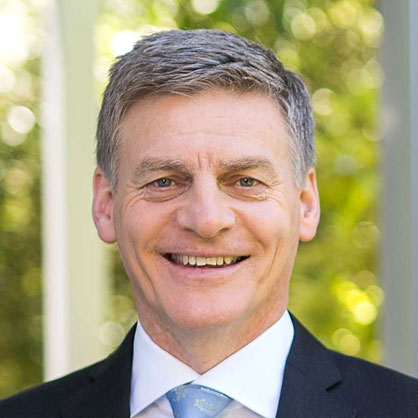 Sir Bill English, a former New Zealand Prime Minister, Deputy Prime Minister and Leader of the Opposition, was nominated for an Honorary Doctorate of Laws degree for being an outstanding graduate of the University and for his contribution to New Zealand.

Sir Bill has maintained a long connection with the University. In 2016, as Deputy Leader of the National Party, he was the guest speaker at the University’s second Academic Convocation Ceremony and his speech, described as “humorous” and “at times self-deprecating”, was extremely well received by the 4000 guests. He also returned to the Otago Business School in 2016 as part of its Visiting Executive Programme.

Sir Bill’s thoughtful stewardship through the global financial crisis stabilised the New Zealand economy and supported a strong recovery while protecting the most vulnerable. He increased social welfare benefits for families for the first time in 43 years and developed the globally unique social investment approach, changing lives by using contemporary data and technology to focus public resource where it was most effective.

As Finance Minister and Prime Minister, he focussed on sound economic policy and a robust government approach to achieve better outcomes for individuals and families. He noted that the core of his belief “is the utter integrity of the individual person, their importance, and our obligation to them to ensure that they can realise their aspirations and their full humanity, and much of what Government does, does not do that”.

He has always been a strong advocate of evidence-based policy development and the contribution of social sciences to a better community. He introduced science advice from universities into the public policy process and opened up all government data to external researchers with significant benefit to the University of Otago research community.

On Sir Bill’s resignation from politics, Prime Minister Jacinda Ardern noted “he has always stood for what he believes in. He is a man of clear convictions who has always had a genuine concern for the well–being of New Zealanders, and gave a huge portion of his working life to serving on their behalf”.