Q and A with Suzie Bates 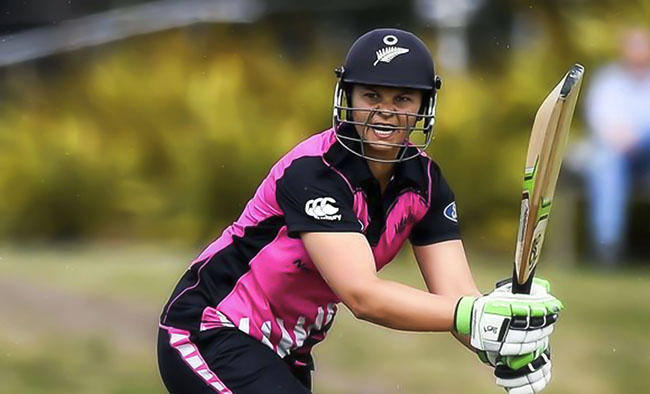 New Zealand cricketer and Otago alumna Suzie Bates has had a good year; at the 2016 ASB Otago Sports Awards in May she took top honours in the NZME Sportswoman of the Year category.

Earlier this year the Otago Sparks and White Ferns captain was also named New Zealand Cricket ‘International Women’s Player of the Year’ and the Otago Cricket ‘Women’s Cricketer of the Year’.

Bates’ playing and leadership abilities were also recognised at the highest level when the Wisden Cricketers’ Almanack named her Leading Women's Cricketer of the World, and described 2015 as the year she consolidated her “status as one of the power hitters of the women's game.” Wisden referred to her 258-run innings during the 5-0 one-day series “whitewash of Sri Lanka”, and recording her sixth one-day century in a victory over England in February, as recent highlights.

Bates gained a Bachelor of Physical Education in 2012, and a Postgraduate Diploma in Health Sciences (endorsed in Human Nutrition) last year.

I was passionate about Physical Education at [secondary] school and my degree educated me further about the ‘science’ side of sport – and I always knew I would be involved in sport in some way throughout my career.

Describe some recent achievements that you’re most proud of?

Being named the Wisden women’s player of the year was very special. Also, the recent Otago Sports Awards Sportswomen of the Year Award, because I have always loved representing Otago. But, honestly, I play team sports so am most proud when I have successful campaigns with the teams I play for.

Winning the national title in 2013/14 with the Otago Sparks was a highlight as was the World Cup in India with the White Ferns; it was a proud time for me as captain. Although we bowed out in the semi-final the way the team played all summer, and the enjoyment we had on and off the field made for a successful summer.

Describe being selected to play for New Zealand . . .

Playing cricket and basketball for New Zealand was a dream since I was in Year 9 at Otago Girls High School, so my first games were genuinely like a dream come true. These first experiences of international sport made me determined to continue playing at that level for as long as I could.

What was it like playing basketball for New Zealand at the 2008 Olympics?

As a kid I watched the Olympics on TV and dreamed of competing there – I’d get goose bumps when the national anthem played. Rubbing shoulders with the best competitors in so many sports inspired me to be a better athlete. The Olympic village was an unreal experience - everything you needed to perform to the best of your ability was on tap, another bonus was getting to know other athletes from New Zealand and around the world.

What are some stand-out international appearances?

Any World Cup that I have competed in for the White Ferns. I was most proud of the 2016 T/20 World Cup in India and the style of committed cricket we played as a team. On a personal note I was pleased to be able to lead from the front with the bat at the 2013 50 over World Cup in India.

Describe the state of women’s cricket internationally, and in New Zealand; is it stronger now than ever, or is there potential to grow the popularity of the sport?

Internationally, women’s cricket is in a great place; there are so many exciting opportunities to promote and develop the game even further. The women’s Big Bash in Australia was a huge success. The English Kia Super League this July and August is shaping to be a great competition which will improve the exposure of women’s cricket.

In New Zealand we need to make sure we continue to promote the game to all and raise its profile so more girls can see what a great game cricket can be – and that’s the opportunity’s there to make it a career.

Describe what you enjoy about your current life?

Playing cricket all around the world for New Zealand and the Perth Scorchers and spending a winter in England playing for Kent and the Southern Vipers makes for a pretty exciting year. Chasing the sun and being able to do what I love pretty much all year round while making new friends and having new experiences is the best part of the lifestyle. I wouldn’t have it any other way and I will continue to make the most of the opportunities while I am still loving my cricket and motivated to keep improving.

Describe your physical and mental approach to high-level sporting performance, and your career:

My approach to sport and life is to have no regrets. I learnt from an early age that fitness was one of the most important aspects to high-performance sport and that if I didn’t keep fit I wouldn’t reach my potential. It also contributes to my mental preparation as I am a much more confident player out in the middle when I know I have done the hard work leading up to competition.

Mentally I have learnt the key is to take the success with the failure and not get too high or low along the way; accepting that you will fail sometimes and not being afraid of failure has played a massive part in being able to express myself on the field and not worry about the outcome – just focus on the process.

How have your Otago studies helped you personally, and in your career?

Studying at Otago gave me a good balance during my early sporting career and gave me something else to focus on. It also has encouraged me to keep playing at the highest level because having completed a degree I know when I decide I am done with competing I have something to fall back on.

The most important things that I learnt through studying Physical Education was the importance of staying fit and healthy in life and in sport and passing on that knowledge to other people.

What did you enjoy about studying at Otago?

I enjoyed Otago because it is home, but also because it brings in so many students from around the country. They then generally move on, but with the amount of travel I do I often bump into Physical Education students around the world doing amazing things, which is always nice.

When you look back on your time at Otago now you think…?

What a great place and time of life – I am proud when I bump into any current or former Otago students.

Are you competitive, or do you go for work-life balance?

I am extremely competitive and I find it hard to sit still but I love being active and I enjoy playing golf or walking with friends and family as a more relaxing experience away from competition.

After my current job I’ll…

If I can I’ll continue to be involved in sport at some level. I want to pass on what I’ve learned through my studies at Physed School, playing cricket, and being involved in Basketball at a top level to the next generation of athletes. I particularly want to help girls to get involved, and to stay involved, in sport.

Where did you grow up, and where do you call home now?

Dunedin will always be home and I love spending time in Central Otago also; cricket commitments mean my time is split between Perth, England and Dunedin.