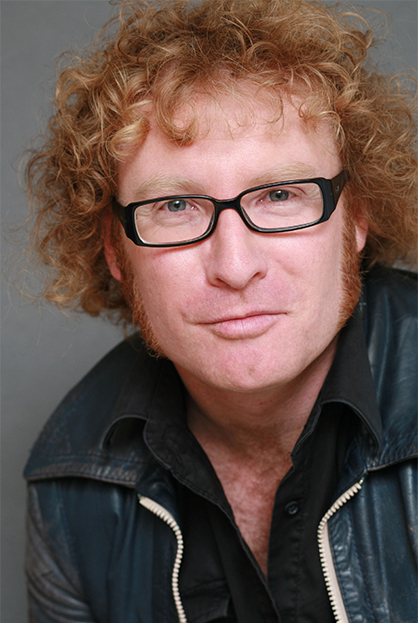 Te Radar, born Andrew J Lumsden, is an Otago alumnus who you will recognise from TVNZ documentary series such as Global Radar, Radar Across the Pacific, Radar’s Patch, Off the Radar, Hidden In The Numbers and Homegrown. He is well-known for his typically ‘Kiwi’ style of comedy, his presenting, writing, directing, and his award-winning documentaries - based in large part around themes of sustainable living, travel, and culture and society. His latest series, Radar’s Pacific, explores the social and historical aspects of the Pacific Islands.

Radar has received an impressive array of accolades for his work. In 2012, he was the winner of the NZ Television Award for Best Factual Series (Radar Across the Pacific), and Best Information Series (Global Radar). He was also nominated for Best Presenter – Entertainment/Factual (Global Radar). In 2010, Radar’s Patch won the Qantas Film and Television Award for Best Information/Lifestyle Programme, and at those same awards he was nominated for Best Presenter. He is the two-times winner of the Qantas Media Award for Best Humour Column (the New Zealand Herald), and between 1998 and 2009 he received numerous awards for his work in comedy – including New Zealand comedy’s two highest accolades, the Billy T (1998) and the Fred Award (2009).

He has also worked for TV3, Maori TV, Alt TV, Radio New Zealand, Kiwi FM and Metro, and published a book on his experiences in sustainable living titled Off the Radar: A Man, A Plan, and a Paddock.

Radar puts much of his success down to the time that he spent immersed in the University of Otago’s Theatre Studies programme.

Q and A with Te Radar

How has Otago helped to shape your life and career?

A lot of it is shaped by Allen Hall and the Theatre Studies Department, in the sense of instilling the practical nature of performance and drama. It wasn’t something I went to university thinking I was going to do! I thought “I’ll go and do Law”, and that fell apart quickly! I guess the particular way in which Theatre Studies ran, and the emphasis on the practical meant that by the time I was finished, I was comfortable and competent with a really wide range of skills that stood me in pretty good stead.

Highlights and memories of your University days?

Oodles. Selwyn College, I went there. That was interesting, I really enjoyed it actually. I was there with a good bunch of folk. It was like boarding school, but with far fewer rules. And it’s also that context of everything else that was happening in Dunedin at the time. I went and saw tons of bands, and at Otago they had the wet lunches. You’d go and see bands at lunchtime – and then I was going more on Thursday, Friday and Saturday nights, and you’d see ten bands a week, which I loved. And I think people underrate that social side of things. Being able to get out and interact with the community. And I really loved the Lunchtime Theatre and the drama programmes there, which were the main focus of my time even though I wasn’t technically doing a drama degree – or didn’t have one at that point in time.

Highlights and memories of your Theatre Studies experience?

I didn’t complete the course requirements! It was almost unheard of not to pass – it was a tough course, but you could pretty much get through. But the last part of it involved directing a play written by a playwright and starring some actors – and I directed a play that I wrote myself and starring only me. But it was probably the best thing I ever did, because it was right as I was due to leave, and it proved to myself that I had the capability of doing a half-hour solo comedy show.

And then when I left, within a year or 18 months I was touring Canada doing one-hour shows – and I’ve never looked back. So university’s a weird thing – what do you take out of it, do you take away a piece of paper that says you did something? Or do you take away the experience that allows you to go on?

The Humanities Division, I guess what they call a Liberal Arts degree, is a really important thing. There’s a lot more to life and to business than knowing how to tally up a line of figures or figure out what holds something together. I think in some ways, some of that has been lost in the last few years – it’s very much a place where you’re supposed to go to get a qualification rather than an experience. Forming a sense of the cultural side of where you live and where you study, and the nature of that, is really important.

Some of the best bands in New Zealand were playing in Dunedin during those years, and I wouldn’t have missed that for anything. And the artistry and creativity around that… The Verlaines were playing at the time, Snapper, King Loser, the 3Ds. I remember seeing King Loser when Shayne Carter was playing backup guitar with them, and it was like a religious experience. Venues like the Empire and the Crown… It was very much that south end of town kind of person. I was a downstairs Cook rather than upstairs Cook kind of person. I did quite a bit of stuff on Radio 1 as well.

I know I sat through a lot of Philosophy and English and Politics lectures and the internationally famous Jim Flynn always pops up. I had a Politics class with him on a Friday afternoon after a wet lunch, and he spoke in an unrelenting monotone: it was really fascinating although it was hard not to fall asleep, after the wet lunch! There was no shortage of characters among the English and Philosophy and Politics departments.

I remember once I did something for Theatre Studies and Lisa Warrington said, “It was good, but we both know you could have done better”. That’s really stuck with me, because at the end of the day, you know when you could have done something better – and when someone points it out, you go “Yeah actually, I could have done.” It’s one of those things. It haunts me, but in a good way!

You can’t beat that heritage built of stone, really, can you. It’s a stunning campus. The Leith. I remember the first year I went flatting - the Leith flooded my bedroom, which was an inauspicious start! I was in Leith Street Central. I had a downstairs room and it flooded – it was a bit inappropriate for the behaviour of a river.

And that sense of permanence, a feeling of solidity to those buildings, and the time that Dunedin was a wealthy city. With the architecture, you get a sense of a history longer than there really is – you feel like you could be at Oxford or Cambridge, to a certain extent. I love those buildings, and I love the climate. I came from the Waikato and wet foggy winters: I love the cold – that crisp, dry cold – and the harbour. When you live there, you think that places like Port Chalmers and Portobello are so far away, but they are really stupidly close. It’s a beautiful part of the world.

Also, there’s a lot to be said for going a long way away from anyone that you know, and I did it because of the Faculty of Law. Otago has the best faculty, and my grandmother went to Otago, so I went “That’s where I’ve got to go”. And it still has an exoticness about it. Even though it was Law that drew me there, everything else outside of that made me stay. I’d go back and live in Dunedin again, but in my particular line of work, there isn’t a lot of work for me there at the moment. I actually heard Graeme Downes on the radio the other day doing a dissection of Lorde’s ‘Royals’, and they’d studied it in class - what a privilege. I still stay in touch with a lot people from Otago in one way or another.

Do you remember much about your graduation day?

I was convinced that the Philosophy Department had made a mistake in grading my papers, and if I turned up on the day they’d take it off me – so I didn’t go! That’s the true story. Ironically, since not completing the directing course, I’ve gone on to win a few directing awards and no one’s ever asked to see my qualifications. Again, it comes back to what did you get out of university!

If you were recommending study at Otago to a friend or family member, what advice would you give them?

Go. Go there - do it! There is really something to be said about studying in a smaller city, on a compact campus like Otago's. And certainly with the courses that I did, people are still there now. They were leaps and bounds ahead of rival courses around the place, and it is really a great city to live in.

Your thoughts on the strengths of the Theatre Studies programme?

It was really practical. You did stuff all the time and you got a really diverse platform of skills that you may or may not use again in the future – acting, lighting, directing, costume, all of those things. You got a taste how all of those worked, and what worked and what didn’t. So if you have an understanding of the whole of your art form, you can appreciate it as the years go by.

And in comparison to other courses, I’ve heard people talk about that chance to practice your craft in front of other people – the Lunchtime Theatre every week, the capping shows… you can sit and study all the theory you like, but that practical nature is a strength of any course like that.

I’m looking forward to going to the Allen Hall reunion. It’s an interesting one with Theatre Studies and the nature of the industry around the country. People I went through the course with – my best friend is an entertainment lawyer around the world, and his sister is one of the biggest acting agents in the country – we were all in the course together. There are also teachers and actors. You don’t have to want a career treading the boards to appreciate a course like that. I don’t think I could have asked for any more. I put the skills that I learned down there into practice today.