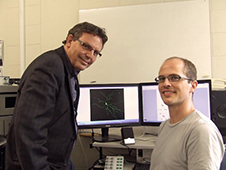 Congratulations to Simon Fisher whose PhD thesis has been placed on the Division of Health Sciences List of Exceptional PhD Theses. The thesis, entitled "Action discovery in the basal ganglia through reinforcement of spike timing-dependent plasticity" was examined by three examiners, and defended by Simon at an oral examination in November.

The Division classes a thesis to be of exceptional quality when all three examiners agree that the thesis is among the top 10% of theses examined, and is of exceptional standard in research content, originality, quality of expression, and accuracy of presentation. Only five Health Sciences theses have been awarded the status of Exceptional in 2015.

Simon's research investigated a mechanism which may explain how we learn new actions that lead to rewarding outcomes. He demonstrated how this type of learning could occur via changes in connections between the cerebral cortex and a more primitive set of brain areas called the basal ganglia.

He believes advancement of our knowledge in this area is important because learning actions is fundamental to all behaviour and the brain areas involved are those that become disordered in neurological conditions such as Parkinson's Disease and Obsessive-Compulsive Disorder.

Simon's research was supervised by Associate Professor John Reynolds. He will graduate with his doctorate in May 2016.