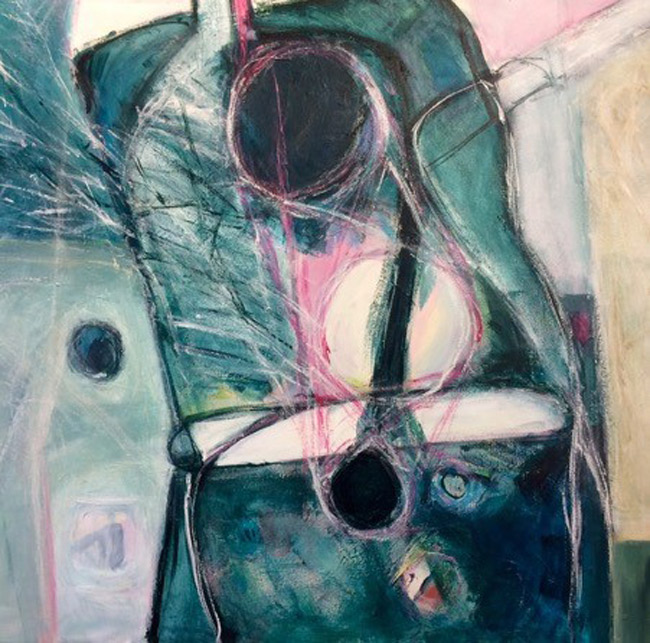 The fourth annual Art and Science exhibition has opened at the HD Skinner Annex, Otago Museum, with the theme of Art and Space, and runs from 10am to 3pm each day, until October 2.

The Art and Science Exhibition is a collaborative venture between the University of Otago, the Dodd-Walls Centre for Photonics and Quantum Technologies, the Dunedin School of Art, and the Otago Museum.

Curators Ruth Napper and Peter Stupples say its primary aim is to use art as a means of exposing the public to the work of research scientists at the University of Otago.

Dr Napper is a senior lecturer with the University of Otago’s Department of Anatomy, and Peter Stupples was an art history professor at Otago, and is now a senior lecturer at the Otago Polytechnic Dunedin School of Art.

“The idea is to use an alternative means of exposing the public to the scientific research that is going on at the University of Otago. We lure a viewer in with an image that for some reason attracts their attention, then as they work through what the art might mean, it leads them into a conversation about the science itself,” Dr Napper says.

Now into its fourth year, the exhibition is becoming increasingly popular.

“It’s special because it bridges the space between scientists and artists. The artists benefit from better understanding the science, and the unique perspective they are then able to bring to the research helps to educate the public,” Dr Napper says. “An artists’ view of the science also helps the scientist to view their own work in a different way.” 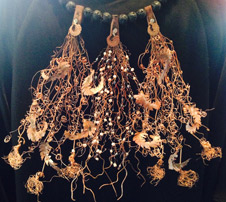 The process begins in November of the previous year, with scientists from disciplines throughout the University presenting their research to the artists. The artists then discuss the science, scientists and artists match up, and the artists produce their own unique interpretation of their scientist’s work.

The theme this year is ‘Art and Space,’ which was inspired by Otago Museum’s planetarium, and also celebrates the 100th anniversary of Einstein’s general theory of relativity last year.

It covers a very broad interpretation of space, from ‘outer space,’ to the space occupied by molecules in the brain, to social spaces.

Dr Napper said a fantastic range of artwork has been produced this year, all of which is for sale, including conventional acrylic and canvas paintings, carving, jewellery, weaving and sound-art. Some of the artists produced multiple works.

The artists are speaking at 2pm on Saturday and Sunday of the exhibition.

This year Dr Napper has had the unique experience of helping to organise the exhibition, being an artist using the medium of jewellery to interpret botanist David Burritt‘s work on the storage of germ-plasm for future use, and having her own research on prenatal alcohol exposure on fetal brain interpreted by artist Esther Ritter.

“It’s been a challenging but very satisfying experience to be able to present science in this unique way,” she says.

Esther Ritter collaborated with neuroscientist Ruth Napper for the Art and Science Project 2016. Dr Napper’s research is using an animal model to investigate the effects of prenatal alcohol exposure on fetal brain. 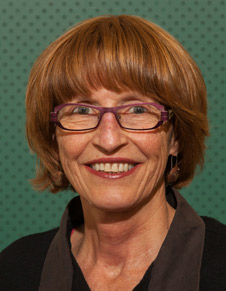 Fetal Alcohol Spectrum Disorder (FASD) is the term used to characterise the full range of damage that can occur from prenatal alcohol exposure. This varies from mild to severe, encompassing a broad array of defects in cognitive, behavioural, emotional and adaptive functioning, which creates a life-long burden. FASD is the leading cause of cognitive challenges and mental disability in the Western world. It is non-reversible, and is one hundred percent preventable.

The link to ‘space’ is that an empty space is created when cells die in the developing brain, as a direct consequence of the neurotoxic effects of ethanol. This requires the brain to rewire itself, and these subsequent changes are assessed by Dr Napper using both microscopy and behavioural testing of animals. The study looks at the impact of alcohol during development on specific functions, and if deficits in brain function, specifically spatial learning, can be reduced with extended training.

Esther Ritter is a postgraduate student at the Dunedin School of Art completing an Honours Degree. Esther studied Social Services and trained as a counsellor and psychotherapist, so her interest in health issues continues to inform her art practice.

She investigates and conceptualises from this vantage point. She works against the backdrop of social disadvantages, a lack of voice and visibility, and a social perception of deficiency.

“There is no safe level of alcohol consumption during any trimester of pregnancy. The risk is well advertised, and many women appear to be aware of the risk. Yet a recent study in Auckland shows that up to 80% of New Zealand women admitted to drinking at some stage during pregnancy. A large number consume alcohol in the early weeks of the pregnancy, before they might know that they are pregnant, but data also suggests that up to 20% continue to binge drink periodically during pregnancy.”

“In my paintings I am constantly working with conflict between what is evident and how to construct meaning. I don’t want to spell things out too much. You can read a few things like grey for grey matter, and fragility, vulnerability and smallness using the colour pink, circles and swirls.”

“Using a predominately abstract style and compositional structure I am thinking about creating contracts and emphasizing the dichotomy and tension between large and small objects, light and dark. I apply brush marks that evoke movement, tension and separation.”